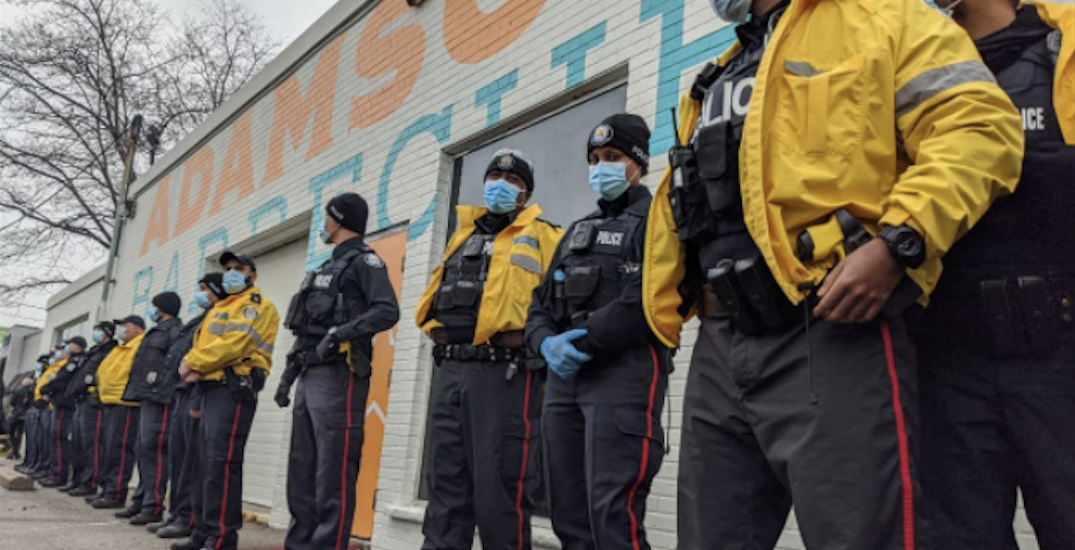 Third time’s the charm? Not for Adamson Barbecue owner Adam Skelly, who has been arrested by Toronto Police after protests flooded the Etobicoke restaurant, which repeatedly defied COVID-19 lockdown orders.

On Thursday afternoon, a swarm of police officers formed a human chain around the restaurant after its locks were changed earlier in the morning.

After Skelly’s supporters showed up in solidarity for reopening dine-in services, at around 1 pm, Toronto Police said a 33-year-old man had been arrested.

“A 33-year-old man was arrested for Attempting to Obstruct Police. He has been taken into custody. More details will follow. Officers remain in the area. We continue to ask for calm,” police said in a tweet.

“A second man has been arrested for assaulting a police officer.”

Since initially reopening on Tuesday, Adamson Barbecue was ordered to shut down operations under Section 22 of the Health Protection and Promotion Act.

Despite the order, Skelly vowed to reopen on Wednesday before being shut down once again and facing summons from both the Toronto Police and the Municipal Licensing & Standards.

Summons include failing to have a business licence, carrying a “maximum penalty of $50,000 for a corporation and $25,000 for an individual or officer/director,” two charges of Fail to Comply with an “order under the Reopening Ontario Act in relation to a gathering of more than 10 people,” among others.

Chief Communications Officer for the City of Toronto Brad Ross explained that Skelly was allowed to get his personal items and addressed the lock swap.

According to Toronto Police, a crowd remains in the area, and officers continue to stay on scene at this time.