Now that fall is just a little over a month away, it’s the perfect time for AccuWeather to release its seasonal forecast.

And it looks like we can enjoy the warmth of summer for a little bit longer, as AccuWeather has forecast the first wave of cold air will be delayed this year. However, this could have implications on wildfire season across BC and the Rockies, according to the forecast.

This summer, wildfires haven’t been as active in the region as compared to previous years, but the transitioning season could change this.

“The fire season is far from done,” AccuWeather Canadian weather expert Brett Anderson said. “We believe there may be a second surge in fire activity during the month of September from British Columbia to Saskatchewan.”

The region surrounding Yukon and northern BC may escape the worst of the fire due to an anticipated wet pattern heading into the new season, according to the forecast.

“The main storm track this fall will be directed into northern British Columbia, but this will also feed mild, Pacific air into much of the west as well,” Anderson said.

The colder temperatures will also arrive late to the Rockies this fall, and AccuWeather has forecast the snow season won’t begin until later this fall. 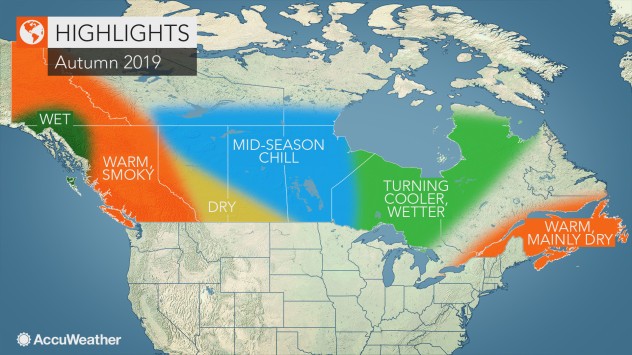 Similar to the west coast, fall in the Prairies is also forecast to start off dry and rain-free.

“The drier and warmer conditions may aid in the fall harvest across the Prairies during September,” said Anderson.

While the drier conditions may be appreciated by some farmers, it could potentially lead to worsened drought conditions in certain areas.

Those living in the Prairies can also expect a “mid-season flip” in conditions that will lead to weather changes.

“During the month of October, there may be an early-season surge of unseasonably cold air directed into the eastern Prairies and northwest Ontario,” said Anderson.

Due to the abrupt switch in temperatures, the first freeze of the season from eastern Saskatchewan through Manitoba may start slightly earlier than normal.

East coasters can revel in the fact that they can enjoy shorts and t-shirt weather a bit longer this year, as summer temperatures and humidity are expected to stick around in the region.

“Fall will get off to a late start around the Great Lakes and into Quebec as the main storm track allows for surges of late-summer season warmth and humidity,” Anderson said.

This includes Toronto, Ottawa, Montreal, Quebec, and even Halifax.

The extended summer temperatures may delay the first freeze by a week or two from southern Ontario to southern Quebec and the Maritimes, which would extend the growing season, Anderson added.

While chillier temperatures are expected in most of the country come October, Atlantic Canada will remain warmer than usual this year.

“Tropical activity in the Atlantic is expected to steadily pick up through September and may linger well into October or even November,” Anderson said.

Because of this, there is a “near-average” threat for a landfalling tropical cyclone in Atlantic Canada this fall — on average, one in this region every three years.

These systems will pull in warmer air from the tropics and there’s potential for damaging winds and flooding rain.

Either way, summer will be ending soon. So enjoy the last of it while you can.