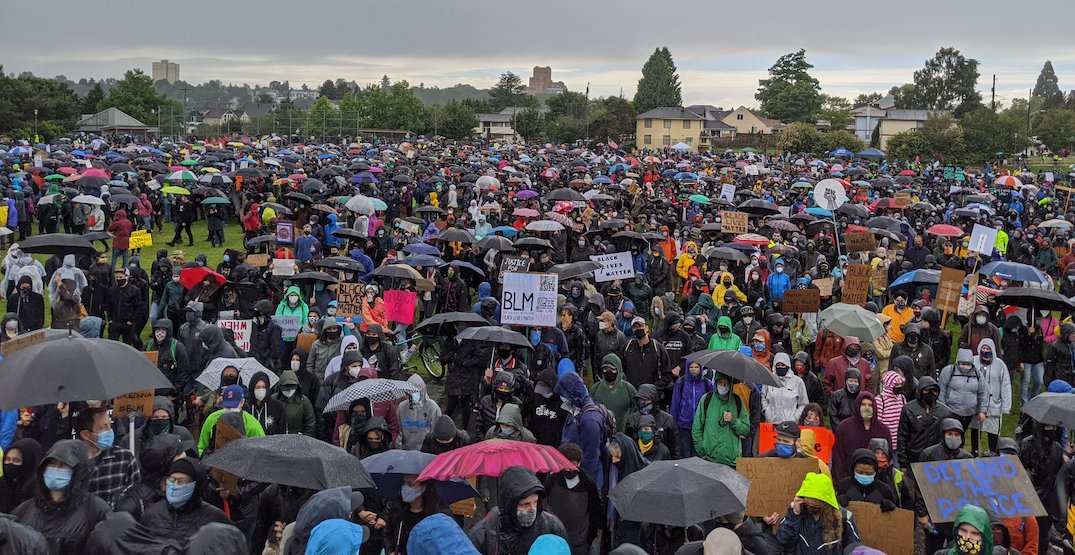 The pouring rain couldn’t drown out the protesters today as they took to the Seattle streets.

In one march led by Black Lives Matter Seattle-King County, people were urged to refrain from going to work and to instead “spend their time and energy on direct action for lasting structural change.”

The group led a march from Judkins Park to Jefferson Park at 2 pm, asking that people be respectfully silent, as it is a time to join the community in grief and mourning.

Marchers were urged to follow a set of rules to ensure that the day remains peaceful and safe, including keeping 6 feet apart from people who do not belong to their households.

“We understand that people will claim that this protest will increase the risk of harm to members of our community by planning such an action at this time. However, we feel that we are not taking a new risk. Rather, we have already been put at risk. Anti-Blackness is a greater threat to our survival. Racism is its own pandemic. It’s killing us, and we are fighting to survive and thrive.”

The march ended up stretching further, as more and more people joined. Here’s a roundup of what the event looked like:

A far as the eye can see. @SeattleBLM says 60,000 of us: wet, masked & determined. #Seattleprotests #BlackLivesMatter pic.twitter.com/9Piiav6NGo

the totally silent #seattleprotest march from Judkins stretches literally as far as the eye can see in both directions #seattleprotests pic.twitter.com/U8sYt9ISEM

No matter what you hear from @realDonaldTrump Seattle is peaceful in our message and this silent protest is our statement!! Teamster Local 117 TNBC supports the movement! @JayInslee pic.twitter.com/i1jWKzRs2o

Props to Seattle! Even though it rained on the silent protest parade the message was clear, Black Lives Matter and the rest of us can all do better. pic.twitter.com/6pDpO9SU1A

#marchofsilence The only sound was the rain – a fitting sound as protestors marched in remembrance of black lives lost at the hands of police. #BlackLivesMatter #seattleprotests pic.twitter.com/zrDe0CpYKT

This #BlackLivesMatter silent march is properly unnerving. I hope many of us non-Black folks here feel the immense & uncomfortable weight of our complicity with White Supremacy & police violence as we march silently through #Seattle’s streets. #seattleprotests pic.twitter.com/LCSyJsyAHb

At the time of publication, the silent march continues.