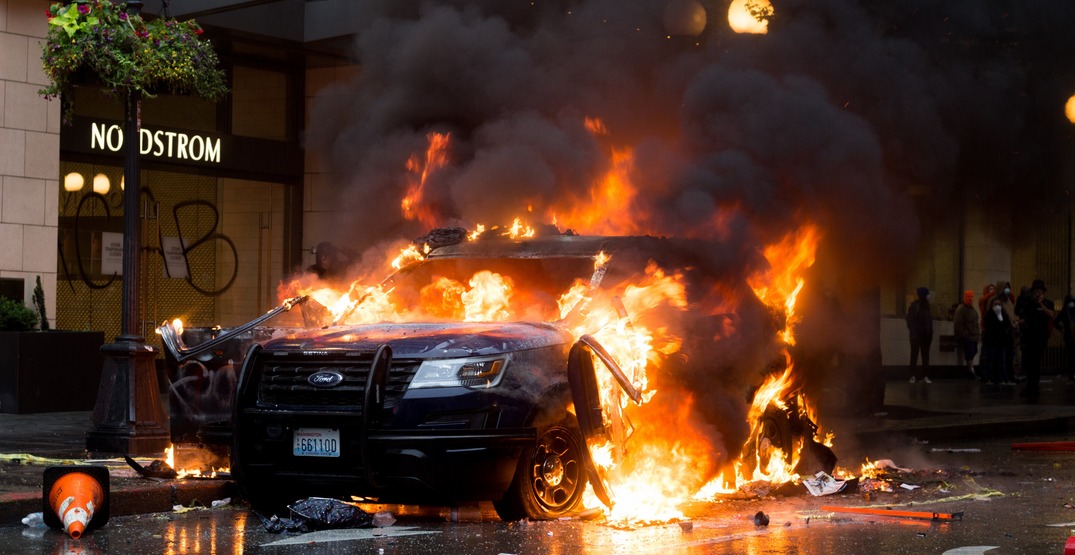 Protests in response to the death of George Floyd and the overarching outrage regarding systemic racism in the United States continued to escalate in Seattle on Saturday, prompting officials to issue a series of emergency orders to ensure the health and safety of the city’s residents.

“While most of those protests were peaceful, there have been isolated but significant events of violence and destruction,” Mayor Jenny Durkan explained in a statement on Saturday.

“This temporary curfew is intended to preserve the health and safety of our residents by keeping our streets safe and accessible for essential workers and first responders and preventing the further spread of COVID-19.”

The #BlackLivesMatter protest in Seattle was peaceful and inspiring. Here everyone is kneeling. The looting was several blocks over and not connected to BLM pic.twitter.com/eLGft5kzmK

During the hours of this curfew, residents were advised to voluntarily stay in their homes, with the mayor explaining that the city did not intend to enforce it unless violations that resulted in public health or safety threats were committed.

In addition to this measure, Mayor Durkan issued an emergency order declaring a Proclamation of Civil Emergency as a result of the escalating violence and destruction from the protests. As well, Durkan issued an Order banning all weapons, “formal and informal.”

She requested 200 unarmed National Guard personnel to “assist with infrastructure, protection, traffic, and crowd management” on Saturday through to next week.

“For most of today, the demonstrations were peaceful, and I thank all those who chose to exercise their right to protest without hurting others,” Durkan stated. “However, in the late afternoon, demonstrations downtown quickly turned violent. Molotov cocktails were thrown, lit fireworks were launched into peaceful crowds, and our firefighters couldn’t access burning buildings because of the crowds.”

triple checked to make sure no faces were shown in this clip but the cops shot a tear gas can and this mf YEETED it back at their ass. can’t believe I got the shit on video. I saw at least 3-4 people doin this. The lord’s work. FUCK SEATTLE POLICE DEPARTMENT. pic.twitter.com/Y9ww8q4tzF

A multitude of negative events that occurred as a result of the downtown demonstrations served as a catalyst for these new measures, including injuries experienced by several Seattle Police Department (SPD) Officers, multiple community-member injuries, several arrests, and the theft of two AR-15 rifles from SPD vehicles, one recovered and one outstanding.

“Currently, we are still addressing a number of groups of offenders who continue to assault officers and loot the downtown core, indiscriminately,” Police Chief Carmen Best said in a statement updated today.

According to the latest update, officials have arrested 27 people for a variety of offences, including arson, assault, and looting.

Seattle PD arrests looters. You hate to see it. pic.twitter.com/M7QXmEFTKS

“In the aftermath of the murder of George Floyd, we all are rightfully angry, sad, frustrated, and heartbroken,” Best continued. “Due to the actions of some groups who wanted to take advantage of this situation – what started peacefully around Noon, became violent and destructive around 2:40 pm.”

It was around this time that officers began getting bottles and rocks thrown at them, Best explained. The first dispersal order was issued at 2:38 pm when the demonstration became “unlawful and then a riot.”

As the situation continued to escalate, protesters entered the freeway at Spring St and proceeded to attack government buildings.

Said fuck it and marched on the freeway ✊🏼✊🏽✊🏾✊🏿 #BlackLivesMatter #Seattle pic.twitter.com/tz3XiiX31D

“As these groups refused to listen to commands or stop their destruction, SPD officers then had to deploy crowd control measures to end the lawlessness as assaults on officers and property continued,” Best described. “At no time have officers discharged their firearms. There were countless uses of non-lethal and crowd control tools.”

Seattle PD pepper sprayed a child in the face, and the cop who did it refused to give his badge number. pic.twitter.com/ftNzZ4zpUR

This was in Seattle, his partner had to physically move the knee off the guys neck #riots2020 #GeorgeFloydProtests pic.twitter.com/7zd94oZpqd

Then, demonstrators began to loot businesses, at which point SPD requested assistance, including the utilization of National Guard resources.

According to Fire Chief Harold Scoggins, firefighters were working “incredibly hard” as well to ensure the safety of residents during the protests.

“There have been many vehicle fires across the downtown core and injuries to both police officers and members of the public,” he explained in a statement. “As I said yesterday before the demonstrations began, I support exercising the right to free speech and peaceful demonstrations, and the need to stand up for what is right. But this is not the way to do it, by causing unnecessary chaos and danger.”

The death of George Floyd has reignited the conversation and injustice surrounding racism and police violence against Black Americans in the United States.

In a graphic video posted to social media on May 25, Floyd was heard repeatedly stating, “I can’t breathe,” as Minneapolis police officer Derek Chauvin pinned him to the ground with a knee on his neck.

According to an official statement from police, Minneapolis officers responded to a 911 call of an alleged forgery in progress. When they arrived on the scene, they identified a suspect in a vehicle and reportedly ordered the suspect to exit it. The suspect then physically resisted the officers.

The officers claim to have handcuffed the suspect and restrained him on the ground while they waited for an ambulance to arrive. He was then taken to Hennepin County Medical Center where he was pronounced dead.

After reviewing the video captured by Darnella Frazier, many Americans believe that the event was a racially-motivated attack by police.

Chauvin has since been charged with third-degree murder and manslaughter.