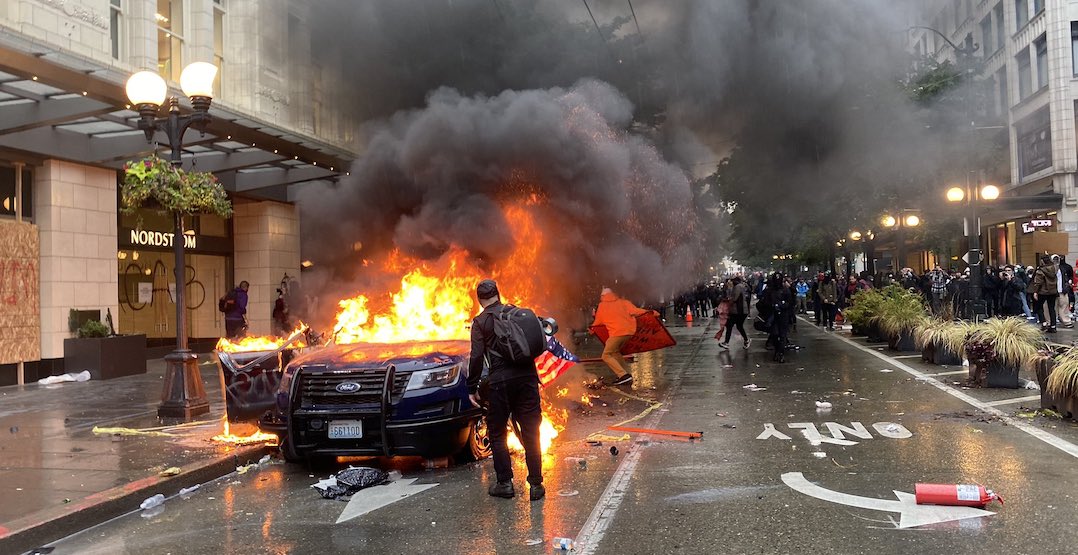 All over the world, people are marching and protesting over the death of George Floyd, a 46-year-old Black man who was killed by a police officer in Minneapolis on Monday, May 25.

In Seattle, a protest against police injustice that started off peaceful has turned violent.

In multiple reports, shots were fired from a stolen rifle. There were also reports of “Proud Boys” (armed white supremacists) heading toward protesters.

PROUD BOYS ARE ON PINE AND 5TH AND ARE CARRYING. STATE TROOPERS HEADED TO 5TH AND CHERRY, THEY ARE INTENDING TO SHOOT. THERE ARE MORE SNIPERS ON JAMES. CARS BEING SET ON FIRE .

These are the real enemies. pic.twitter.com/KSO56LbXGX

Shots fired at the #GeorgeFloyd protest in #Seattle: pic.twitter.com/4xmILZydyh

proud boys and anarchists, both of whom are confirmed to be on site in downtown Seattle, have started fires and are firing assault rifles. THEY are the ones causing violence and destruction after protests remained peaceful for hours. #seattleprotest

In the midst of the demonstrations, Seattle Mayor Jenny Durkan announced a State of Emergency requiring individuals to be home by 5 pm. In a series of tweets, she revealed that the situation is “extremely dangerous” and that “while many individuals gathered peaceful, some individuals have started fires and are destroying buildings.”

I will soon be signing an emergency order and the @CityofSeattle will be imposing a 5 pm curfew soon. Crowds need to disburse from downtown immediately.

Washington Governor Jay Inslee has also activated 200 members of the National Guard at the request of the City of Seattle.

“The National Guard is on stand by to assist the Seattle Police Department as requested by Mayor Durkan,” Inslee said in a news release. “They will be unarmed and assist with infrastructure protection and crowd movement. They will only be utilized if absolutely necessary and we appreciate their efforts to help in this important work.”

WE WERE JUST TEAR GASSED AT A PEACEFUL PROTEST IN SEATTLE pic.twitter.com/XAtLwpNW7R

I want to be absolutely clear that this protest was peaceful until the cops fired tear gas into the crowd. #Seattle #GeorgeFloyd pic.twitter.com/Z7LbKDnPh9