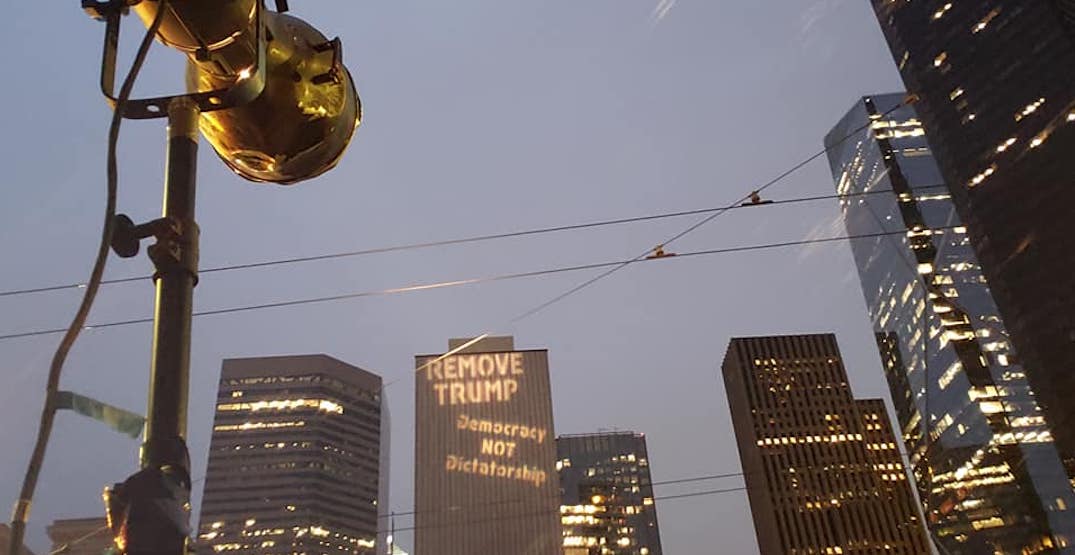 “Democracy NOT dictatorship,” “Arrest Trump,” and “Remove Trump” were a few slogans that could be seen from various vantage points in the city.

Early morning commuters to downtown Seattle were greeted by these projected messages today. Due to a construction site…

The Backbone Campaign, working out of Vashon Island, took credit for the display on social media.

“The projections were inspired by the coup yesterday but we do this kind of stuff all over the country through our brigades of projection artists,” a spokesperson told Daily Hive.
“Backbone provides creative strategies, artful action support, and convenes training opportunities for change agents across the United States.”

Today’s action brigade also set up a banner over the I-5 this morning reading “Remove Trump, invoke the 25th amd.”

Team Backbone Bannering over I-5 in Seattle right now. We’ll be out this evening as well. Impunity for four Trump cannot be allowed. #RemoveTrump #ThrowHimOut #25thAmendmentNow pic.twitter.com/qTPzA85xLk

The campaign has hinted on social media for Seattleites to keep an eye out for other activism pieces in the coming days.