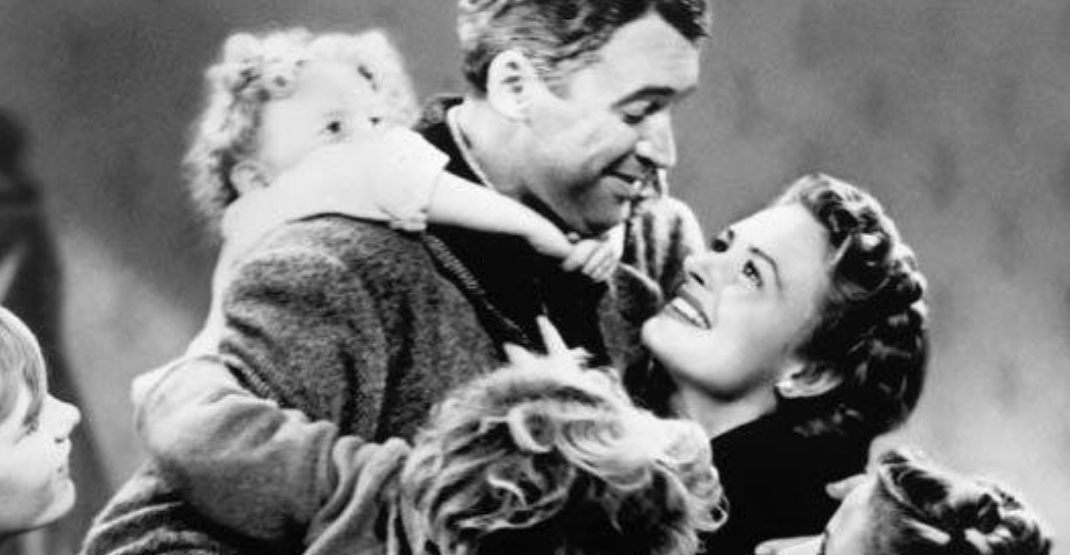 Written for Daily Hive by Robert Collins, a freelancer based in Vancouver, BC.

It has recently come to our attention that there are thousands, potentially millions of Americans that have never seen the 1946 holiday classic It’s a Wonderful Life. Rather, it would appear that the emergence of Love Actually and its veneration of stalkers and fat jokes has displaced It’s a Wonderful Life from its deserved spot as America’s favorite holiday movie.

This will not stand.

Whether you’ve seen it 100 times or this year will be your first viewing of this masterpiece, spoiler alerts be damned, this is why you need to watch It’s a Wonderful Life this holiday season.

The premise is simple.

George Bailey (played by the phenomenal James Stewart), despondent and on the verge of suicide, is given a miraculous opportunity to experience a world where he was never born. Before that, we look back and see how love, ambition, and responsibility have shaped his life and the lives of the people around him.

And although there are enough moments illustrating that modern life in North America had very different attitudes to those held 73 years ago, the push and pull between Bailey’s desires and obligations still resonate today.

If you know one thing about It’s a Wonderful Life, it’s that it’s an absolute weep fest. Only a fool or a sociopath would watch it without something absorbent close to hand. But it’s not a sad movie. Just like This Is Us, the weepiest show of the past decade, the tears flow from moments of generosity, bravery, and kindness. It’s not heartbreaking; it’s uplifting.

If anything, It’s a Wonderful Life is less sentimental than This Is Us.

Jack Pearson’s struggles with alcoholism may occasionally tip the halo from atop his angelic head, but George Bailey can be a total jerk.

His ultimate ambition is to travel and see the world, and he never disguises his dislike for his mundane hometown of Bedford Falls. At his lowest ebb, he yells at his wife, his children, and their teacher before driving through a snowstorm (and crashing) in a drunken fog.

This is all part of It’s a Wonderful Life’s magic. Despite the miraculous and quasi-religious elements of the movie, it’s never a fairy tale. George Bailey is a good man but not a saint. Just like every member of the Pearson family, he’s a flawed, three-dimensional character.

It’s much darker than you think

It’s not much of a spoiler to give away that It’s a Wonderful Life has a happy ending. But before that uplifting finale, it has enough dark moments to satisfy the most morbid Ozark and Black Mirror fans.

The entire plot of the movie is based around Bailey contemplating suicide. But beyond that, we witness death, alcohol abuse, and an adult assaulting a child: all in a single scene as George saves grieving pharmacist, Mr. Gower, from accidentally poisoning a patient.

Corporate America is represented by banker Mr. Potter, the personification of greed and the inspiration for The Simpsons’ Mr. Burns. Tempted by the promise of money over morals George momentarily contemplates sacrificing his ethics before the realization that he’s shaking hands with the devil.

These are mere dimmer switches before the real darkness arrives. James Stewart’s performance as George’s life collapses rips your heart out.

Watching George clasp his drink at a bar, praying with shaking hands after an emotional and physical meltdown, is an unflinching portrayal of a broken man.

This is not a saccharine movie.

If you sit through Christmas dinner with the family silently praying that conversation doesn’t turn to politics, you’re not alone.

It’s a Wonderful Life is the balm that soothes the pain, its political and moral message entirely dependent on the viewer’s own perceptions.

For the progressive viewer, George’s people-over-profit philosophy is utterly endearing. He openly supports immigrants, giving the heavily accented Mr. Martini and his Italian family the loan to buy their own home. He routinely puts others’ needs ahead of his own for the benefit of his community, even when his heart says otherwise. Contrast his outlook with the merciless greed and thievery of Mr. Potter (seriously, that guy is a total prick), and It’s a Wonderful Life reads like a plea for democratic socialism.

At the same time, Conservatives can view It’s a Wonderful Life as a validation of traditional values (George takes over the family business and has a supportive wife and four kids at home) along with confirmation that we have a benevolent Judeo-Christian God watching over all of us. In the final scene of the movie, a telegram arrives announcing that George’s infrequently seen businessman friend Sam Wainwright gleefully wires over $25,000 (a serious amount of money back then) to save the day. See, capitalism is great!

Of course, to announce these points will only bring up the political arguments again. Best just watch the movie and keep quiet.

It’s part of our cultural DNA

There are so many little pieces of It’s a Wonderful Life that have become ingrained into our culture. It’s been referenced by Friends, The Simpsons, Home Alone, SNL, Cheers, and countless other films and TV shows. But its resonance runs even deeper.

George’s cop and cab driver buddies are named Bert and Ernie. Even this ridiculously bougie beer commercial builds its premise around Clarence’s refrain that “Every time a bell rings an angel gets his wings.”

It’s a Wonderful Life is everywhere without most people realizing it.

It’s America at its optimistic best

In the nightmare of a world where George was never born, charming Bedford Falls has turned into Pottersville, a town of hard-drinking and cheap thrills, its population kept purposely poor by its slum overlord.

There are a lot more Pottersvilles than Bedford Falls today, but there’s still something profoundly heartwarming about watching George Bailey and his tiny Buildings and Loan Association stand against big business and help people afford their own home — a small slice of the American Dream.

Only the hardest cynic can’t look past these antiquated tropes. George’s final redemption comes not through his guardian angel but from the strength of his community. No one hero saves the day. The people George helped are the people who have his back in his moment of need.

Clarence the angel’s parting message is that “No man is a failure who has friends,” and there’s definitely nothing dated about that sentiment.