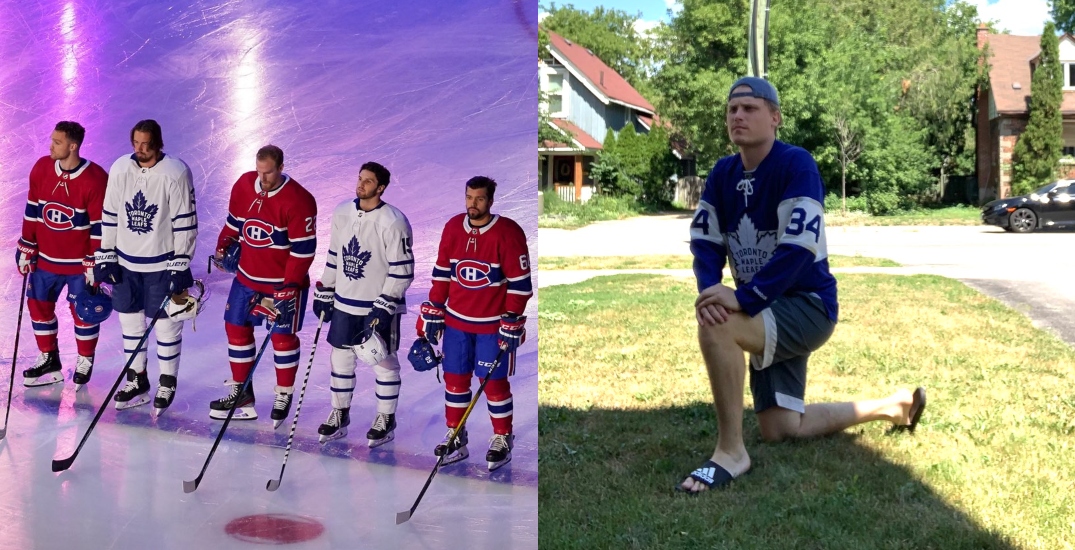 The NHL returned to the ice this week, with exhibition games in the hub cities of Toronto and Edmonton.

Played without fans in attendance, the games drew much larger audiences on television than the usual preseason tilt — no surprise given hockey-starved fans haven’t seen live games since March.

Prior to each game teams organized in various ways to show support for frontline workers and to combat racism, during the national anthems. Usually, this involved teams intermixing, and in some cases interlocking arms to show that they’re together for the various causes.

What they didn’t do was kneel for the anthem — a sign of solidarity against anti-Black racism and police brutality — which has become commonplace in the NBA, MLB, and MLS returns to play.

Together, we stand for equality. pic.twitter.com/vRMBn0XwG5

The NHL did announce plans for more acts of support when the playoffs begin this weekend.

“The world has changed significantly in the four months since the NHL played its last game,” NHL Chief Content Officer Steve Mayer said. “We therefore will raise awareness for the NHL’s support for the Black community while also celebrating the incredible individuals who have worked tirelessly to ensure positive health for those affected by COVID-19. While we will miss having the fans in the arena, we will use Opening Day and future NHL games to bring people together to celebrate our common humanity.”

But at the same time, when Eric Trump applauds the way you tried to raise awareness, you may have missed the mark.

So hockey fans have taken matters into their own hands. Fans from all over the league, on both sides of the border, have begun posting photos of themselves kneeling to social media.

The hashtag is #kneel4hockey and it’s been picking up steam thanks to the Black Girl Hockey Club on Twitter.

Can we make this a thing #HockeyTwitter ? #hockeyisforeveryone #BlackLivesMatter https://t.co/LWHUQU05ZL

I kneel because others won’t. I kneel because the NHL has refused to acknowledge the racism and injustices that are so prevalent in hockey culture #Kneel4Hockey #BlackLivesMatter pic.twitter.com/jOhW8FxK5r

I #Kneel4Hockey because hockey should be for everyone and we shouldn't stop fighting until it is.

And because gestures without action are empty, support @BlackGirlHockey. pic.twitter.com/RfuAT33oMK

I #kneel4hockey because a flag is a symbol; it’s supposed to represent the values of a nation. Those values include honoring and protecting Black lives. #BlackLivesMatter. pic.twitter.com/Zy7idS6e2n

Today, we as hockey fans need to #Kneel4Hockey if we really want #HockeyIsForEveryone to be true. I love the sport, but work needs to be done to make the game open, accepting, and available to everyone.

If the players won't take a stand (and kneel), the fans will. #Kneel4Hockey #BlackLivesMatter #HockeyIsForEveryone @EricTrump @NHL pic.twitter.com/ExiQMgX3Sw

Today I #Kneel4Hockey because white players and fans need to do more to make hockey accessible and welcoming for everyone. Start in your own corner of the (hockey) world! #BlackLivesMatter pic.twitter.com/vo7FbEnzNs

I #Kneel4Hockey because the @nhl and @canucks won't. We need to do things that make people uncomfortable and listen. Standing side by side and lumping causes together is lazy and performative. We need to support our BIPOC friends better, we need to listen and we need to learn. pic.twitter.com/v9IYVxb0ko

If the league won’t do it, I will. #BlackLivesMatter #Kneel4Hockey pic.twitter.com/WS2SJIegGD

I #Kneel4Hockey because it's the bare minimum to support an accessible and welcoming hockey culture, and the @NHL couldn't even manage that.
Donate to @BlackGirlHockey and support changemakers in the game. pic.twitter.com/AzQdHuTJLV

People across the world are kneeling, why can't you? #Kneel4Hockey
You wanted to be better? The time to show what you've learned is now. @DallasStars @NHL @tseguinofficial pic.twitter.com/AsYI35nrQt

I #Kneel4Hockey because the @nhl won’t. I kneel because until hockey is for Black lives as much as it is for white ones it cannot be for everyone. I kneel because to be part of this fight is an honor. I kneel to show my commitment to the movement.#BlackLivesMatter pic.twitter.com/nQbqzN7ZDd

As a relatively new fan to the sport, the @NHL and the @penguins, the response to the #BlackLivesMatter movement has been disappointing and it makes me less proud to be a fan. I think that the NHL can do better but in the meantime I will #Kneel4Hockey pic.twitter.com/C9Mj7lgXvD

#Kneel4Hockey because #BlackLivesMatter. the @NHL and @NHLFlyers need to do better. pic.twitter.com/rKj1RwzQA4