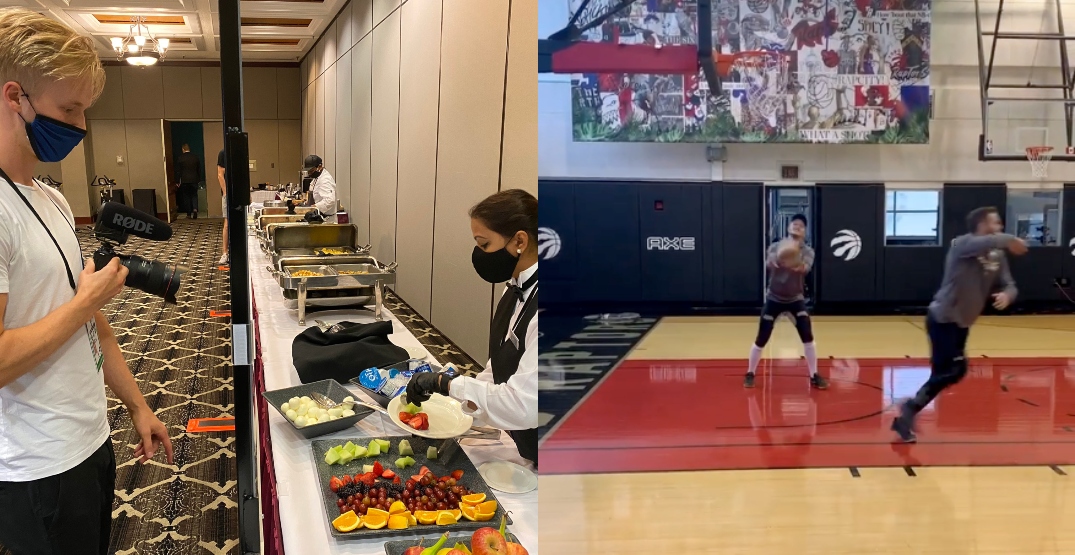 NHL teams arrived in Edmonton and Toronto on Sunday and now seem fully acclimated to the hub cities.

Players, coaches, and staff are operating in a bubble environment, meaning they’re not coming into contact with the outside world. That includes their families, which is a sacrifice the 24 participating teams are making for a chance to win the Stanley Cup.

Independent media aren’t allowed in the bubble, so we’re left to teams and players on social media to show us what’s going on inside.

As one of the top teams in the Eastern Conference, the Boston Bruins are staying at Hotel X in Toronto. The top five teams in the East were assigned to that hotel, while the remaining seven are slumming it at the Royal York.

Here’s a look at the accommodations for one Bruins player:

Some teams went the extra mile for their players, as the Calgary Flames did, decorating rooms with family photos. The Flames are staying at the Sutton Place Hotel in Edmonton, along with the five other lowest-seeded Western Conference teams. The top six teams in the West are staying at the JW Marriott.

Each team appears to be decorating their floor to make everyone feel more at home.

Little taste of Vancouver with us in Edmonton. pic.twitter.com/ebJHF6lD27

Another look at a teams floor. Looks beautiful. Almost like they’re in Toronto.
🎥 @MapleLeafs pic.twitter.com/txqSHklN1c

Every team entered the NHL bubble healthy, and the league would like them to stay that way, which is why players, coaches, and staff are getting tested frequently.

Getting tested in the bubble. Lot of this going to be happening throughout the bubble
🎥 Marcus Foligno pic.twitter.com/3rTSG92gg5

Outside of hotel rooms, the NHL is doing plenty to keep players occupied, as some of them may be in the bubble for a couple of months.

Unlike the first reviews of the food in the NBA and MLS bubbles, the meals inside the NHL bubble look pretty good.

Fueling up before the work day. pic.twitter.com/6BrGv4vFoM

Drooling at the look of this gourmet #bubbleeats
📸 @NHLFlames pic.twitter.com/dNGJaT8IAO

At Rogers Place in Edmonton, the NHL has set up player lounges for relaxation, and ping pong, apparently.

👀Peep one of the player lounges in Edmonton #StanleyCup pic.twitter.com/8dcyp6beJi

A staple of every NHL dressing room, ping pong is a theme inside the bubble, with tables set up all over the place.

Here’s the battle for all those wondering
🎥 @mnwild pic.twitter.com/yoJSdBOyRA

Players are allowed to leave the hotel, but pathways are fenced off for them.

There’s even a tunnel from the Royal York to Scotiabank Arena, fenced off too, of course:

Found the tunnel from Royal York to the ACC sorry Scotiabank center in Toronto…. pic.twitter.com/7wGfN9GUAE

The same is true in Edmonton, even for when players need to cross the street:

The new normal. Strolling to the rink for practice. pic.twitter.com/AqDCHij4oY

Fans can’t get near the players, but they can try to communicate with them like this:

I’ve been staring at this for 20 minutes and still have no clue what it means 😂 #LeafsForever
🎥 @Kaskisuo pic.twitter.com/09zS9NZEfn

Players have lots of meal options, which includes things like a pop-up sushi restaurant in Edmonton as well as Tim Hortons coffee trucks in both hubs.

A quick look inside the Edmonton Village and, to nobody’s surprise, a lineup has started in front of the Timmy’s truck
🎥 @Canucks pic.twitter.com/byZdjKC1GJ

There’s no shortage of things to do to remain active, particularly in Toronto, where players have access to BMO Field and the Raptors practice court.

What a bomb. The @Canes got a real Patrick Mahomes on their team 😂
🎥 @TSN_Sports pic.twitter.com/iCMVyGjlr7

And we have a winner! Looks like @jakenbake20 beat out Rust to take the 👑 @penguins pic.twitter.com/YEdghnRDvt

There’s a tennis court available for use too, apparently:

Who would you want as your tennis partner? Crosby, Letang, Pettersson, or Hornqvist?
🎥 @penguins pic.twitter.com/VuNaYtuLdv

Meanwhile, in Edmonton, they’ve got access to a golf simulator and bubble hockey.

Some Pebble Beach action happening in the bubble
📸 @petan19 pic.twitter.com/sICpRylnoE

Inside the rinks, Scotiabank Arena and Rogers Place are looking a lot different than normal, and not just because the Montreal Canadiens are in the home dressing room for their game against the Toronto Maple Leafs.

Both rinks have been given a made-for-TV makeover, with empty seats covered and video boards acting as a technological backdrop for games.

Oh, and then there’s the new plexiglass barrier for the between-the-benches analyst.

Luckily, the hockey still looks like hockey. The Philadelphia Flyers beat the Pittsburgh Penguins 3-2 in overtime in the first exhibition game on Tuesday. Every team will play one exhibition game prior to the playoffs beginning on Saturday.