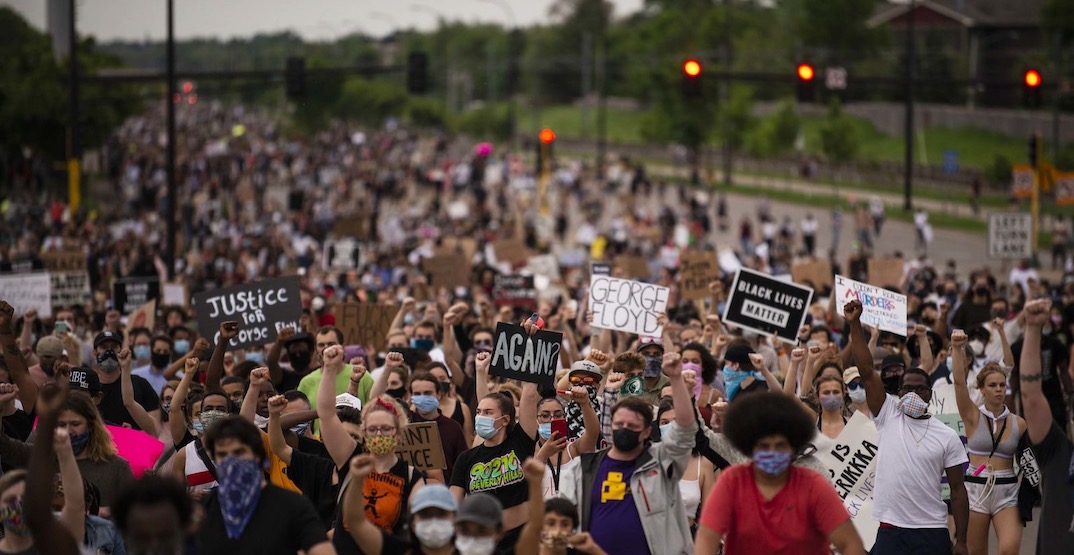 All over the world, people are expressing their opinions on the case of George Floyd, a 46-year-old man who was killed by an officer in Minneapolis on Monday, May 25.

In a graphic video posted to social media, Floyd was heard repeatedly saying that he cannot breathe while being held down by Minneapolis police officer Derek Chauvin.

According to an official police statement, Minneapolis police responded to a 911 call reporting a forgery in progress. The officers arrived and located a suspect in a vehicle. They reportedly ordered the suspect out of the vehicle who physically resisted the officers.

Seattle Chief of Police Carmen Best and Seattle Mayor Jenny Durkan have expressed their solidarity with the public, agreeing that Officer Chauvin committed murder and that the cops should be investigated and prosecuted.

Here’s what Durkan tweeted on Thursday:

The officers who killed George Floyd violated their most solemn duties to protect lives and uphold the law. They should be investigated and prosecuted. In addition, the U.S. Department of Justice should immediately commence an investigation.

The cruel and degrading treatment of Mr. Floyd before his death starkly illustrates the realities that generate the fear and distrust of law enforcement experienced disproportionately by communities of color, particularly African Americans.

This is not just a Minneapolis problem. We must demand better than this everywhere in our country. It begins by acknowledging the reality of institutional racism and its insidious impacts, and then by working to eradicate it through broad cultural and institutional change.

SPD Chief Carmen Best has spoken out forcefully on the Floyd case and affirmed our expectations for every police officer in Seattle, but our work is far from done.

SPD must have a culture of continuous improvement, and we must continue to address the racial disparities that recent reports have highlighted.

To the Men and Women of the Seattle Police Department:

I wanted to take a moment to address the tragic murder of George Floyd by the Minneapolis Police Department officer.

In the video, we hear Mr. Floyd’s repeated calls for help.  We hear him say over and over again that he cannot breathe.

The video is upsetting, disappointing, and infuriating. It does not show the policing we know. Policing is an honorable profession filled with honorable public servants. We are committed to protecting life and serving the community.

Because of the Seattle Police Department’s high level of training, our commitment to de-escalation, and our track record of limiting the use of force, I have confidence that something like this would not occur in our city.

Especially troubling about the video, was the officers who stood by while Mr. Floyd called for help.

As a police officer, you have a sworn duty to uphold the law and do what is right. We prioritize the sanctity of life in every situation.

If you see a co-worker doing something that is unsafe, out of policy,  unacceptable, or illegal, you need to act. This goes beyond reporting. If someone’s life is unnecessarily in danger, it is your responsibility to intervene.

We each have a right to go home at the end of the day, but we also have a responsibility to ensure that others enjoy that same right. We must hold ourselves accountable if we are to maintain the trust of the community who grants us the privilege to serve them.

I know it can be challenging to see these incidents, even when they do not happen here. You all should be proud of how we provide police services here in Seattle.

Thank you for all that you do, every day. Stay safe.