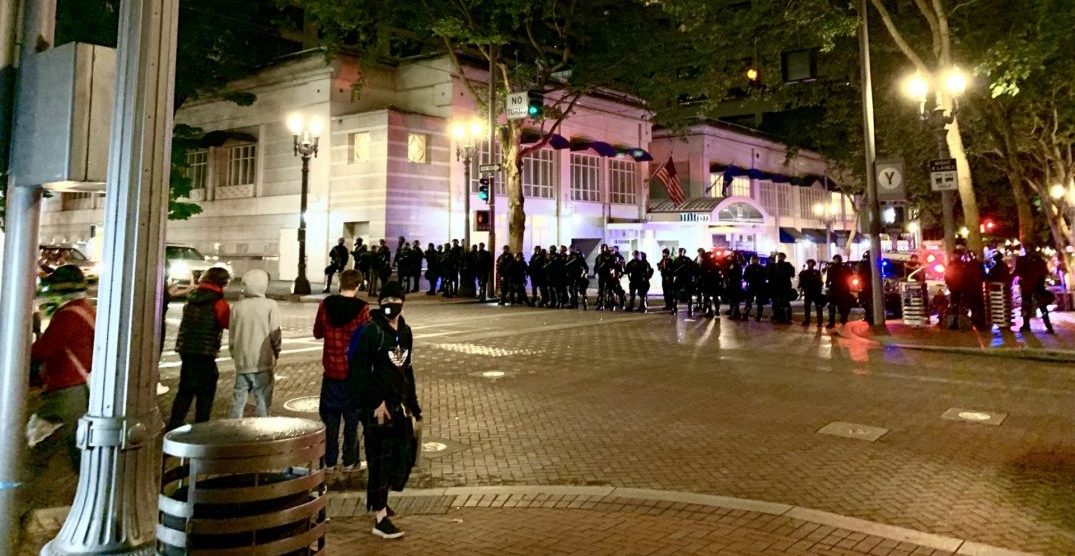 Rebellion, protests, and marches are taking place all over the United States in the wake of the killing of Minneapolis man George Floyd at the hands of the police.

For the second night in a row, Oregonians took to the streets in a peaceful demonstration, and many stood up against Portland Mayor’s declaration of emergency, which instated a curfew in the city beginning at 8 pm on Saturday and lifting at 6 am Sunday.

Unfortunately, another night of protests turned violent and unsafe as people clashed with police and one another.

This was my view of the #PortlandProtest. It was very peaceful. Nobody was looting or rioting at all. The police just started shooting unprovoked. pic.twitter.com/a9UaYzHGZR

(1/2) Okay, I need to comment on the #portlandprotest . I live in Portland, the protest was 100% peaceful, there was no destruction or vandalism going on. There was a curfew tonight, the curfew still didn’t take effect for another 45 minutes. The Police came BARGING in with tear

tear gassing even before curfew; no rioting or property damage. the police are instigating #portland #portlandprotest pic.twitter.com/kGiAXmwvAP

I can’t stress this enough the cops initiated the violence, they then through smoke bombs towards me and the news crew I was standing near. #GeorgeFloydprotest #portlandprotest pic.twitter.com/v37gWXD8ge

IT WAS PEACEFUL UNTIL THE COPS SHOWED UP #portlandprotest #GeorgeFloyd #BLM pic.twitter.com/zEGiEwFuvA

How big is the crowd? Here’s 1 min of people walking past with no end in sight pic.twitter.com/c749zKwr8G

Some are even taking to social media to promote the raising of funds for bail money or offer pro Bono, legal counsel.

If you need bail money for tonight if arrested in Portland #pdx #portlandprotest https://t.co/BgV7rud0vt

Chauvin has since been charged with third-degree murder and manslaughter.