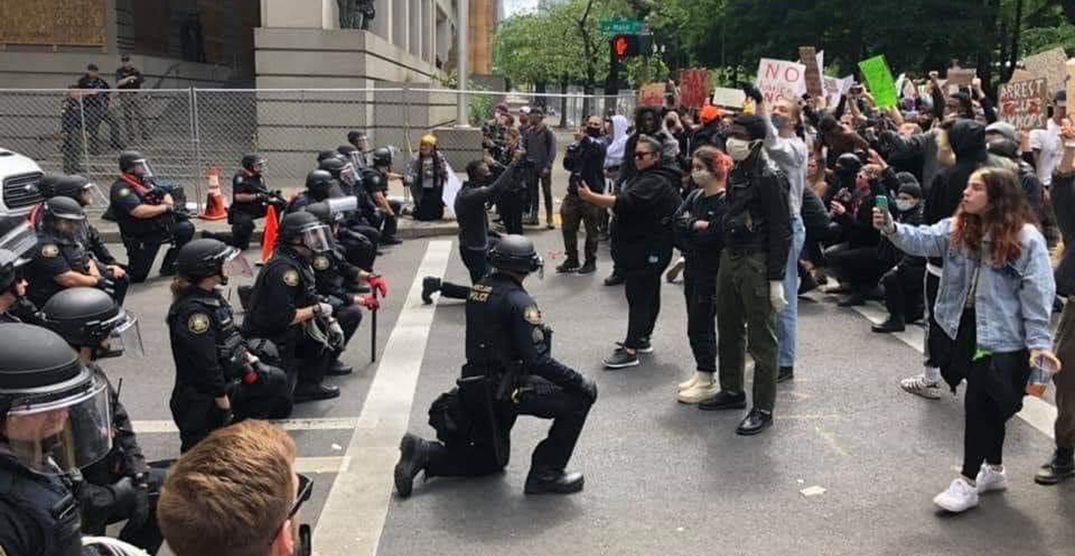 Social media posts are circulating to celebrate the Portland Police Bureau, who took a knee with protesters on Sunday as a show of solidarity. However, many who were at the protest are claiming that the police force used violence and gas “minutes after the photo op.”

Protesters are taking to the street in droves after the killing of George Floyd in Minneapolis this time last week. This weekend saw day after day of unrest and protests in Portland, prompting the mayor to declare a state of emergency with a city-wide curfew and plead with the governor of the state to send in the National Guard.

Shortly after the stories surfaced depicting the act of solidarity by the police, protesters began shedding their own light on the situation.

This was a PR stunt, nothing more.

acab they tear gassed everyone right after 🙄

POLICE ASKED PEACEFUL PROTESTORS TO MOVE INTO THE PARK, THEN IMMEDIATELY TEARGASSED THEM.
FUCK. THE. PORTLAND. POLICE. DEPARTMENT. #PortlandProtests

MOMENTS LATER THEY RELEASED TEAR GAS. THIS WAS A PUBLICITY STUNT. https://t.co/SnOP9CYUCp

I was flash banged tonight at a completely peaceful protest with kids and families. There are thousands and thousands of people out here in Portland’s streets, protesting peacefully.

the police kneeled to us today in Portland, and then proceeded to surround us and load their guns. be careful out there #BLACK_LIVES_MATTERS #GeorgeFloyd #PortlandProtests

This was my view of the #PortlandProtest. It was very peaceful. Nobody was looting or rioting at all. The police just started shooting unprovoked. pic.twitter.com/a9UaYzHGZR

Daily Hive contacted the Portland Police Bureau for comment but did not hear back by time of publication.