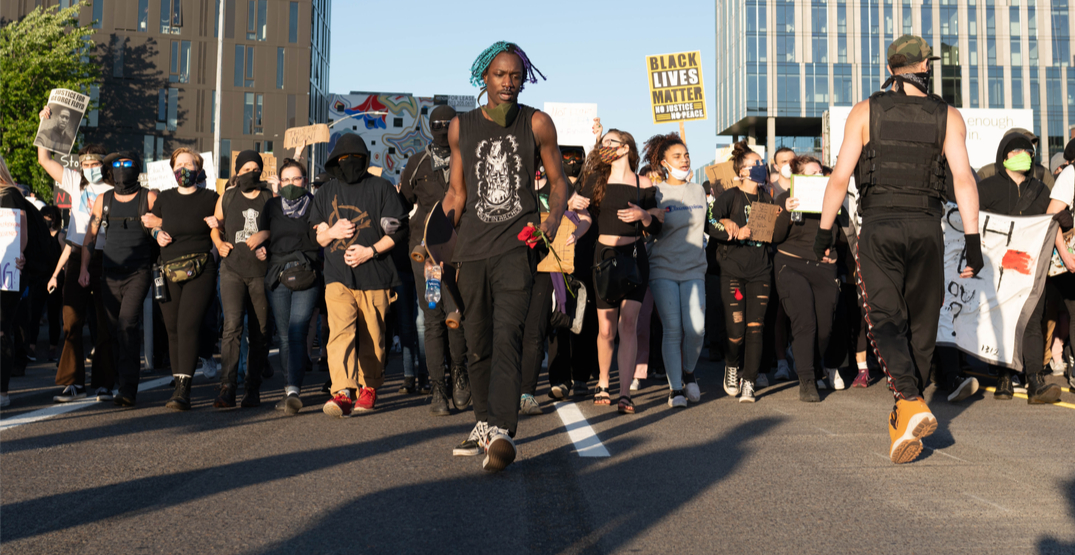 According to reports by the Portland police, two people were arrested during peaceful protests on Monday night, alongside “several arrests” made during a separate assembly.

On May 25, George Floyd was killed by officers of the Minneapolis Police. The following weekend, Portlandians took to the streets to stand up against police violence, and unite for the Black Lives Matter movement.

Now, for 25-straight days and nights, those demonstrations and protests have continued in Portland, and across the globe.

According to the Portland Police Bureau, two people were arrested during last night’s peaceful portion of group demonstrations.

A 29-year-old woman and a 52-year-old man were both arrested for “interfering with a Peace Officer” according to the police.

“One group met at Jefferson High School and marched throughout the neighborhood for several hours,” reads the police report. “This event remained peaceful and did not require intervention by police. They dispersed without incident.”

“Another group gathered near the Justice Center. They marched in the street and blocked vehicular traffic on the Southwest 2nd and 3rd Avenue sides. Repeated warnings were provided via the sound truck and on social media advising the streets were open and if people remained in the streets they were subject to arrest or force.”

The police report continues on saying that most of the crowd departed the area, before returning shortly after. During the second wave of demonstrations outside of the Justice Center, “several arrests were made” after curfew in City Parks was invoked.

It is now after midnight. All city parks including Chapman and Lownsdale parks are closed. You need to leave now. If you do not, you may be subject to arrest and use of force.