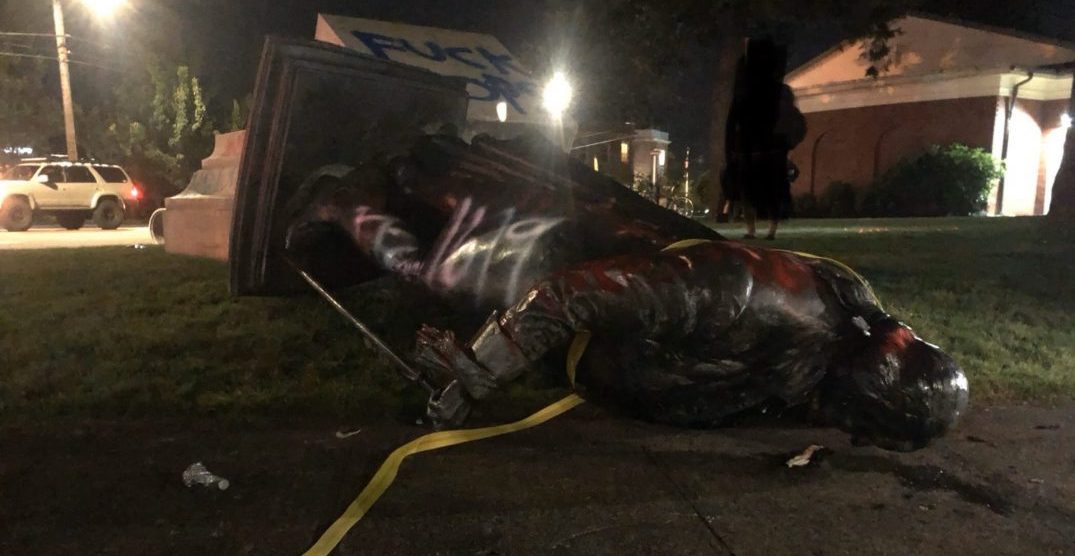 Portland protesters tore down another statue of a white historical leader who was also notable owner of slaves.

On the eve of Juneteenth — soon to be a state holiday here in Oregon — protesters took to the streets yet again in Portland to fight for equity, fight against police violence, and demand action.

The first US president and founding father, George Washington both owned slaves while vocalizing his unease with the institution, though the emancipation of his kept slaves was not seen until after his death.

Portland’s Rose City Park district has had a George Washington statue for decades, as the main feature on the busy corner of Sandy Boulevard and NE 57th.

After toppling a statue of Thomas Jefferson earlier in the week, several Portland protesters turned their sights to George Washington Thursday night.

Demonstrators initially wrote “genocidal colonist” on the Washington statue pedestal before burning a flag draped over his head.

Later, the straps attached to the statue helped topple the large figure, and more messages like “Big Floyd”, and “F*ck cops” were spray-painted onto the debris.

“Around 11 pm, the group on the 5700 block of Northeast Sandy Boulevard tore down and vandalized the George Washington statue,” writes the Portland Police Bureau in their update. “Group members associated with this incident dispersed by running off into surrounding neighborhoods.”

“No arrests were made during these demonstrations.”