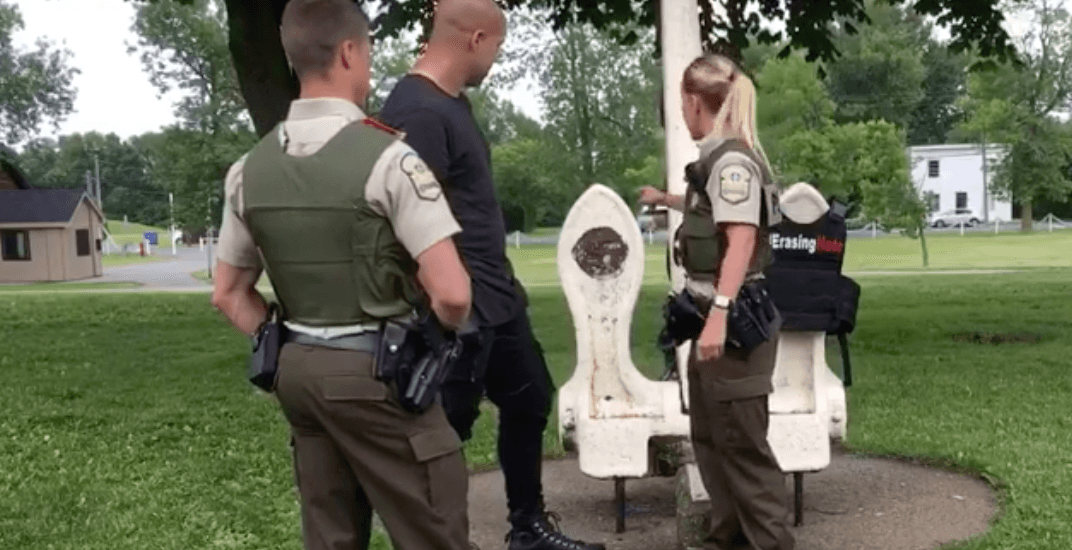 The municipality of Pointe-des-Cascades, Quebec, will not remove an anchor that has a swastika symbol from a local park because it is a historical monument.

Corey Fleischer, founder of the group Erasing Hate, tried to paint over the swastika symbol last week. However, he was stopped by Gilles Santerre, mayor of Pointe-des-Cascades and police. Fleischer posted a video of the incident onto his Facebook page.

“As I began the process of erasing the paint that enhanced the symbol of Hate the [city’s] mayor showed up to the scene,” wrote Fleischer in a Facebook post.

“He couldn’t understand why I was so upset and why I was removing the paint that covered the Swastika. He then told me that if I didn’t leave the park that he would call the police and charge me with “Destruction Of Property.” His bullying tactics had little effect.”

In response, the City said that the anchor will be staying where it is.

“The Pointe-des-Cascade Parc des ancres and its museum were set up over 25 years ago by the Pointe-des-Cascades Historical Society to exhibit the artifacts recovered by divers in the Lakes Saint-Louis and Saint-Françoism thus retracting the history of the municipality,” said the City in a release.

According to the municipality, the anchors are a symbol of peace.

“Recently, anchors in the park have been the subject of controversy, as they have a swastika on them. As a result of research by a CBC journalist, it turns out these anchors would date before the Second World War, and that this symbol, which has existed long before the war, was used by the owner of the merchant vessel, would rather reflect goodness and solidarity.”

Mayor Gilles Santerre said that the town “does not endorse Nazism.”

He said that to reduce confusion, plaques will be installed to inform visitors of the anchors and their meaning.