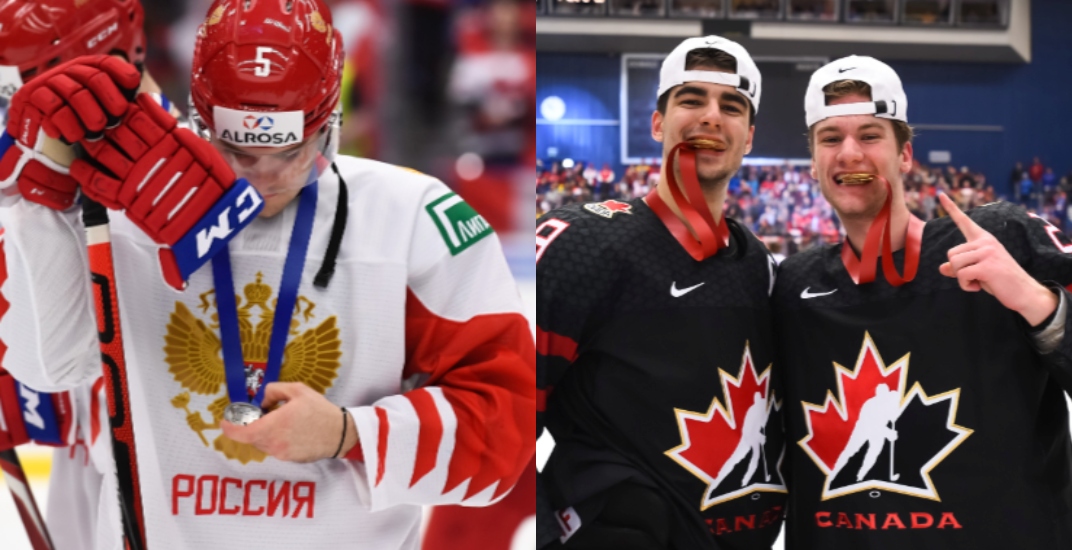 And so did Russians, it appears.

While Team Canada scored three times in the last 11 minutes of the game to win 4-3, many people in Russia were watching a different result on television.

Russia’s top sports channel, Match TV, decided to show the 2011 World Junior Championship gold medal game at the same time as this year’s final. The live broadcast, which also took place between Canada and Russia, was shown on another station (Channel One).

The results of each game were quite different of course.

It appears many Russian fans didn’t notice that the game they were watching took place nine years ago, featuring future NHL stars like Vladimir Tarasenko, Artemi Panarin, and Evgeny Kuznetsov.

It happened because Russia's main dedicated Sports network @matchTV (equivalent to Sky Sports or ESPN) didn't show the final. Instead the big game was switched to @channelone_rus (the country's most popular channel, like BBC One or CBS/NBC).

Faced with a blank in its schedule, Match TV decided to rebroadcast the 2011 final, when Russia beat Canada 5:3. Meanwhile, Channel One showed the live game, which Russia lost. The problem is a lot of spectators didn’t realise they were watching a nine-year-old repeat.

Many people in Russia were completely fooled by the old broadcast, taking to social media to congratulate their team for winning. Among the people duped were pro soccer player Dmitry Tarasov and Russian lawmaker Mikhail Degtyarev, according to a report out of Russia.

It was likely extra embarrassing for Degtyarev, who is the chairman of the State Duma committee on physical education, sports, tourism, and youth affairs — whoops.

Just how so many people could be fooled by this is best told by former Russian sports writer Slava Malamud in this thread he posted to Twitter:

The game was shown on Channel 1, Russia’s main state-owned station, not on Match TV, the main state-owned sports station. So, Match TV made a brilliant decision to broadcast the replay of the 2011 Juniors final at the same time…

So, as the final siren blew in both broadcasts, the ones who watched Channel 1 sulked and logged off, but the ones who watched Match TV flooded the interwebs in jubilant gloating. “Thank you, lads! You’ve ripped Canada again!” Some prominent Russians were among the revelers…

The answer is simple. A great majority of Russians knows next to nothing about hockey, other than “yay, we’ve shown the evil West!” Most folks don’t know who Tarasenko and Kuznetsov are. Russia’s love for hockey has always been a marriage of political expediency. Funny. And sad.

As an addendum, here is the soccer star’s celebratory Instagram post, complete with the Match TV screen grab. pic.twitter.com/PeS7bAltYd

And here is the real kicker. I have saved it for last. The lawmaker in question is Mikhail Degtyaryov, the chairman of the State Duma Committee on… ta-da!.. sports!
Say one thing for Russian parliament members. Some of them make Louie Gohmert look smart.

… by the Putin administration. The contract with MatchTV didn’t matter, Ch 1 has a bigger audience, the game had political significance, and since both channels report to Putin, the decision was made authoritatively.
MatchTV, not knowing how to plug the hole, aired the old game

So, there you have it. In the background of all those poor misled Russian fans we have a TV channel which had to violate its contract with sponsors and lose millions because Putin wanted the game on his favorite channel.
This is Russia in a microcosm, friends.