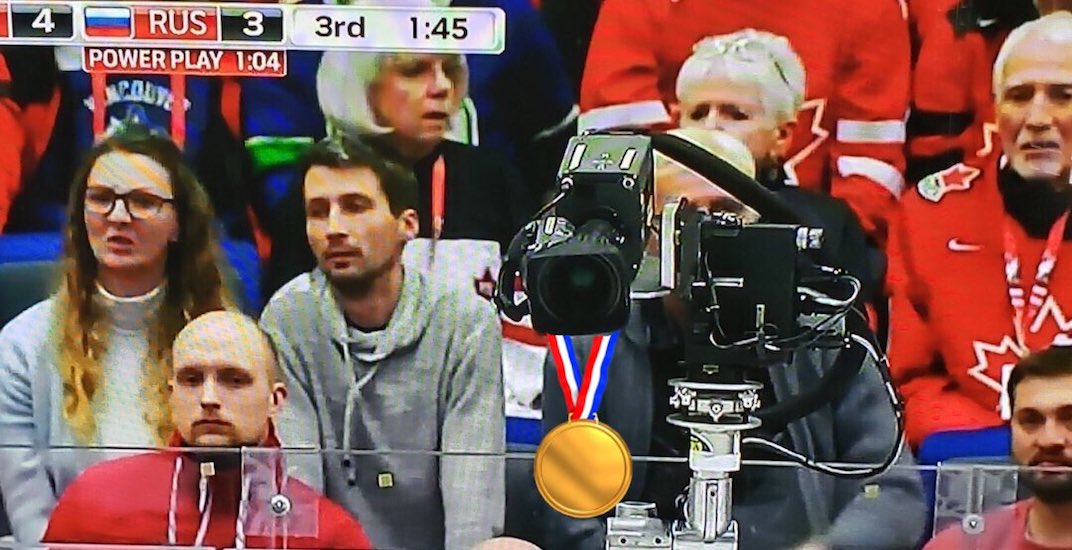 After a thrilling come-from-behind win over Russia in the gold medal game at the World Junior Championship, there were no shortage of heroes for Team Canada.

Captain Barrett Hayton certainly had a heroic performance, clearly playing in pain with what we later learned was a Grade I separated shoulder. That didn’t stop him from scoring the tying goal in the third period though.

Akil Thomas, a player who was rarely used in the game, scored the biggest goal of his young life. His game-winning goal gave Canada a 4-3 lead with under four minutes to play in the third period and will be replayed on TSN for years to come.

In any other year, Hayton and Thomas would be Canada’s heroes — and they still are. Just not quite as much as TSN’s centre ice camera.

With under two minutes to go and Canada already killing a penalty, things looked like they would go from bad to worse when Aidan Dudas cleared the puck over the glass from his own zone. It would have (and still probably should have) been called a penalty for delay of game. The linesman even signalled it a penalty.

But then it wasn’t, thanks to TSN’s well-placed centre ice camera.

Instead of Canada having to kill a second penalty, giving Russia a 6-on-3 advantage with their goalie pulled, none was called.

The referees appeared to reference a rule that states: “A player who lifts the puck from the defending zone and hits the scoreclock or any structural object above the ice surface, causing a stoppage of play, will not be assessed a penalty.”

Now, the difference there is if the scoreclock wasn’t present, the puck would be in play because it’s above the ice surface. The TSN camera was located just behind the glass, meaning that without its presence, the puck would still be out of play.

Canada got a huge break — the TSN turning point if you will — and everybody knew it. So Canadians did what we do best.

We said thanks, showing appreciation for the real MVP: the TSN camera.

Most heroic camera ever.

Add a gold medal for the TSN camera pic.twitter.com/xqbd4OJXC4

I said I loved @TSNHockey for how well they cover the world Juniors, but having their camera save Canada from a 6 on 3 puts them in a special place in my heart♥️
🇨🇦🥇 Great tourney boys and thanks to everyone over at TSN @TSNBobMcKenzie @tsnjamesduthie @odognine2 @rayferrarotsn pic.twitter.com/8nQloIXPz5

I'm waiting for the TSN camera to be unhooked and held high as the Canadian team skates around the rink. pic.twitter.com/iV5ax7SbiC

I hope they put a gold medal around that TSN camera after the game.

The puck deflected off a TSN camera.

THIS IS AN ACTUAL TSN TURNING POINT!! #WorldJuniors

Thanks @TSN_Sports for your " camera " work !

Team Canada getting bailed out by the TSN camera to win gold is the most Canadian thing to happen.

Get that TSN Camera on a postage stamp

TSN camera gets first start of the game

The TSN camera is getting The Order Of Camera Award.

Is the @TSN camera going to get one of those “Our Heritage Moments” comercials for becoming a Canadian hero today? #WorldJuniors2020 #TeamCanada

STATUE OF THE TSN CENTRE ICE CAMERA ON PARLIAMENT HILL

TSN camera saves a penalty for Canada. Next level network influence on this tournament.

Of course, it has long been said that, without TSN cameras, few would care about the World Juniors…..so, there’s that.

Somebody bring that TSN camera to Red Deer next year. Make it the new loonie at center ice!