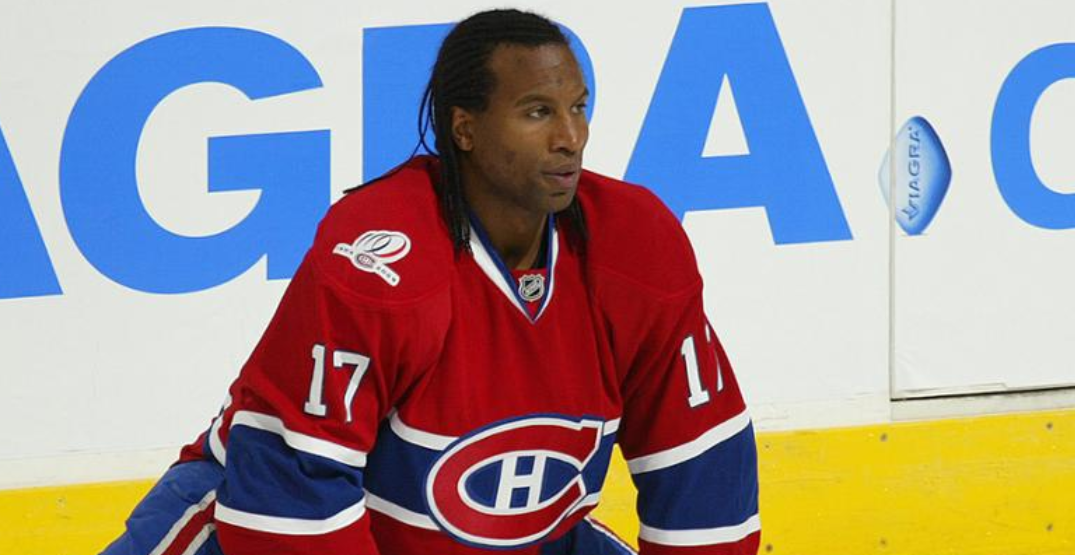 Once most people close the book on their career and begin their retirement, their schedules seem to free up, sometimes even overnight. And with the work grind off in the rearview mirror, their days are slow and filled with relaxation … and maybe a hint of boredom.

This may be true for most people, but not for former NHL player Georges Laraque, who stays busy running more businesses, charities, and side projects than he can count on his two hands. In fact, those hands are what helped Laraque make a name for himself as an enforcer who became a fan favourite just about everywhere he played, including his native Montreal.

Laraque, who played in the NHL for 13 seasons, now spends much of his time running his Montreal-based kombucha company, Rise as well as Ultimate Sports Collection, an in-person and online sports memorabilia store. He also works as a public speaker and ambassador for PETA, World Vision, and the Mira Foundation. On top of that, the 44-year-old hosts a daily radio show on Montreal’s 91.9 Sports FM.

Lucky for us, Laraque was generous enough to take the time to catch up with Daily Hive Montreal.

You were certainly one of the more memorable players during your time in Montreal. How did it feel to be embraced by the crowd as a fan favourite?

It’s pretty common for tough guys to be fan favourites. But in the beginning of my career I wondered why. Then I came to the conclusion that it’s because people that come to watch hockey are often blue collar workers that work hard for their money, right? And on every team, who’s the blue collar worker? It’s the tough guy. We look more like the everyday person.

Let’s say you’ve been away from the city for a while and you only have 24 hours to spend in Montreal. What kind of things would you get up to?

I’ve been vegan since 2009. And every time my friends come to town, I always refer them to the amazing vegan restaurants that are here. A lot of these vegan restaurants could compete with with New York in terms of quality, and what the chefs do here is just amazing. It’s amazing that we have that much food culture. People love their food here.

Of all the things you’ve done in your career — both on and off the ice — what would you say is your proudest moment?

On the ice, my first NHL hat trick, February 21, 2000 against the LA Kings. As a tough guy, the only hat tricks I ever scored were on my PlayStation. I also had a fight in that game, so that’s a complete hat trick for me [laughs]. I’ll never forget it. After the game, Wayne Gretzky called me and said I needed 49 more to break his record.

Off the ice, I’ll tell you a story. I did a lot of charity work when I played in the NHL, because I felt that with my parents being born in Haiti, it was my duty to do good, and charity work is what set the tone for me.

When I was playing in Edmonton, I got a call from a nurse at the Alberta University Hospital. They told me there was a kid with muscular dystrophy named Jordan. They said he only had a couple of hours to live and that his dream was to meet me before he passed away. So I drove back from Calgary to Edmonton as fast as I could because I wanted to be there. I knew that God would look out for me and nothing was going to happen while I was on my way.

So when I got there, the whole family was there, and I went to see him and started talking with him chatting with him, laughing with him. You know, because in those moments, what’s important to do is to bring a smile so people remember that in his last moments, he was smiling, he was happy and not in pain. And even though he was in pain, I got him to smile at them.

So anyway, a week later, in the newspaper, Jordan’s aunt wrote an article that I still have today. She talked about an angel that came to see him, referring to me, and how, after this visit, Jordan lived another week.

When I read that I said, ‘Oh my god.’ Knowing how happy it made him, I told myself that I have to do this more often.

You appear to be a very busy man. Can you tell me about some of the projects you’re working on at the moment?

To name just a few, I’m a part owner of Rise kombucha. It’s the biggest kombucha company in Canada and I’m very proud to say that it’s made right here in Saint-Leonard.

I’m also a part owner of another Montreal-based company called Actumus, which is a company run by naturopaths who make plant-based medications and holistic healthcare products.

I do a lot of people speaking in Montreal and around the world as well. These days, I’m a lot more busy than when I played hockey, but it would drive me crazy if I just stayed home. I would probably just eat and apply for Sumo wrestling [laughs].

What’s something people may not know about you?

That I love karaoke. I’m a karaoke freak, but I can’t sing to save my life.

I like to go to those places where you can rent a room to sing. In Montreal there’s a place called Pang Pang. Sometimes I go on my own. I rent the room. And I just sing my heart out. And I’m not embarrassed. I have a karaoke machine at home too. And I just love to sing like this alone, even though I suck at it.

When I go away with friends I always look for karaoke places. But it has to be a private room. Not open or else people will film me, and I don’t want that all over the net.