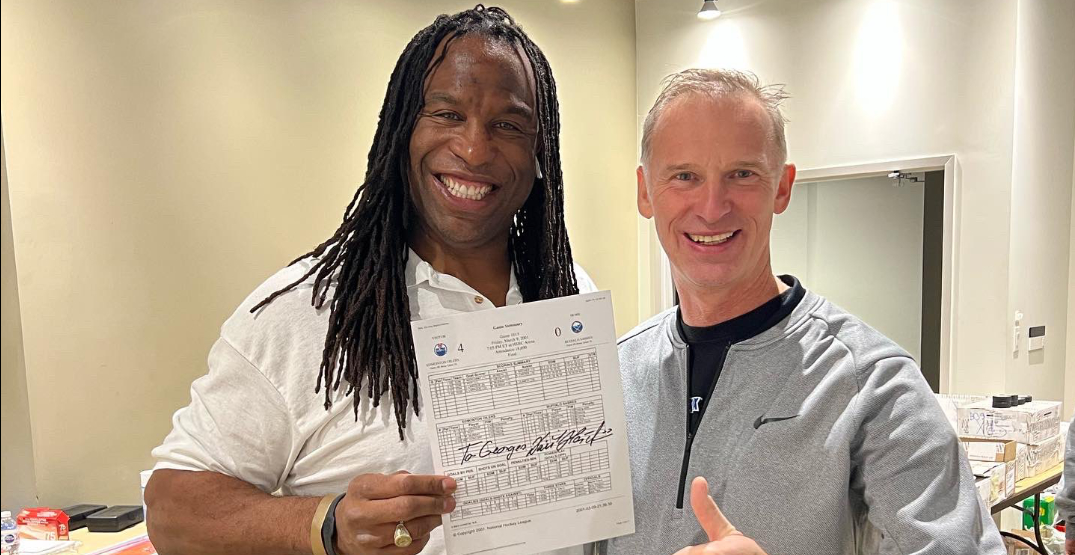 Georges Laraque is going to need to get this one framed.

Laraque added another piece of memorabilia to his collection, hilariously nabbing himself an autograph from legendary goaltender Dominik Hasek — on the most fitting pieces of paper, too.

He had Hasek sign a game sheet from March 9, 2001 — a 4-0 win for Laraque’s Edmonton Oilers against Hasek’s Buffalo Sabres. Laraque, of course, bested Hasek on his only two shots of the game for a rare multi-goal outing from the loveable tough guy.

“This is priceless for me!” Laraque wrote in the tweet.

It was an honour today to meet one of the best NHL goalies of all time, new member of the Hall of Fame: Dominik “The Dominator” Hasek! I also got him to sign the score sheet when I scored 2 goals against him in Buffalo on march 9, 2001. This is priceless for me! @NHL @NHLAlumni pic.twitter.com/ORXyg6wYVa

Laraque doesn’t have to go far to get all of his multi-goal game sheets signed.

Although he’s got 695 suit-ups to his credit, the jovial enforcer — known more for his hard fists than soft hands — had multi-goal outbursts in just six skates.

Among the other goalies he’s victimized for two-goal affairs include Jimmy Waite of the Phoenix Coyotes (January 7, 1999), Bob Essensa of the Vancouver Canucks (December 2, 2000), Ed Belfour of the Dallas Stars (March 30, 2001) and Marc Denis of the Columbus Blue Jackets (January 13, 2003).

But he might have to hunt down Stéphane Fiset first. Laraque’s first and only NHL hat-trick came against the Los Angeles Kings netminder on February 21, 2000.

In all, Laraque netted 53 goals (and 1,126 minutes in penalties) in his 12-year NHL career with the Oilers, Pittsburgh Penguins, Montreal Canadiens and Coyotes.

Two more would’ve saved him one signature and some friendly smiles at Laraque’s expense.