Québec Solidaire is promising to vastly expand Montreal’s underground transit network. If elected to the next provincial government, the QS promises to equip greater Montreal with 38 new metro stations.

The party unveiled their proposed “Grand Montreal Express” project on Thursday, an expansion that would come with a $10 billion price tag and would be slated for completion by 2030.

Manon Massé, Québec Solidaire’s spokesperson, claims that it has been 50 years since the Montreal metro brought us “into the big leagues and it’s high time we find her again.”

The bulk of the proposed new metro plan would add 29 stations to the city’s new Pink Line as well as supported funding for the extension of the Blue Line. 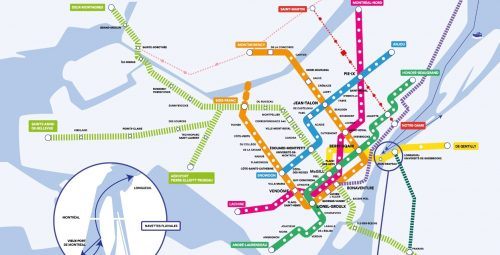 Québec Solidaire also wants to add a tramway, shuttles and a rapid transit bus service that would link Laval, Pointe-aux-Trembles, Pierre-Elliot Trudeau Airport and the West Island to fast and easy transit into Montreal.

Massé says “today, two out of three people take the car by themselves to go to work.” Grand Montreal Express’ plan is to have 50 percent of trips in greater Montreal to be done by public transit by 2030.