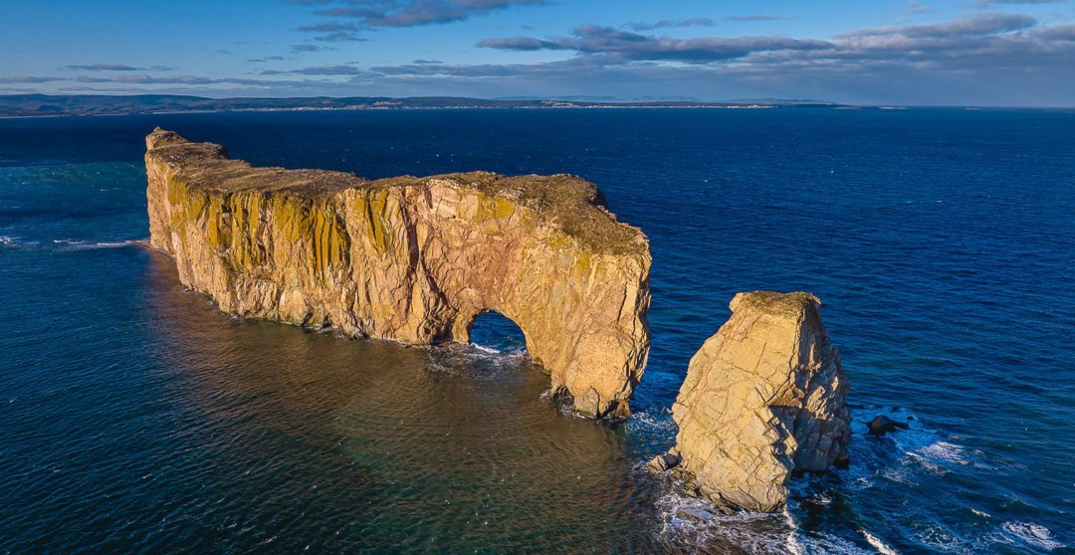 From a distance, this massive arched rock in Quebec might look like a ship. Heck, it might even look like a gigantic Loch Ness Monster. But it’s actually even cooler than both; it’s a 400-million-year-old natural wonder.

Percé Rock (or Rocher Percé) is a giant 15-metre-high limestone monolith rock formation (with sandstone and siltstone veins) in the Gulf of Saint Lawrence at the top of the Gaspé Peninsula.

It is one of the largest in-water natural arches in the world and has become a major attraction for the Gaspésie region.

At 970 kilometres (11-hour drive) outside of Montreal, it’s a bit of a hike but considering you’ll never see something like this again, it’s well worth making a weekend trip out of.

Plus, the drive is as simple as following the Saint Lawrence River all the way up the coast.

Legend says Samuel de Champlain named it Percé (“pierced rock”) in 1607, referring to the rock’s giant hole. The arch is a result of millions of years’ worth of seawater accumulation and good ol’ Father Time.

At an astounding five million ton weight, the limestone monolith is less than a kilometre (800 metres) away from the shores of the town of Percé.

What’s more, the rock has about 150 fossil species and is reachable by foot for four hours during low tide via the tip of the town of Percé. During high tide, visitors can check out the wonder (and its adjacent Bonaventure Island) by a small boat for $45 (tickets available through the Percé website).

Visits to the rock are open in the warm months only, from May 28 to mid-October 12. During trips to Percé Rock, park guides dish out information on beach creatures, the geology of the rock, and fossils that can be found on-site.

Make this part of your spring and/or summer to-do list. You will not be disappointed. And then, revel in the beauty of the rocks by scarfing down some fresh lobster at nearby Percé restaurants.

This place (wait for it)… rocks.