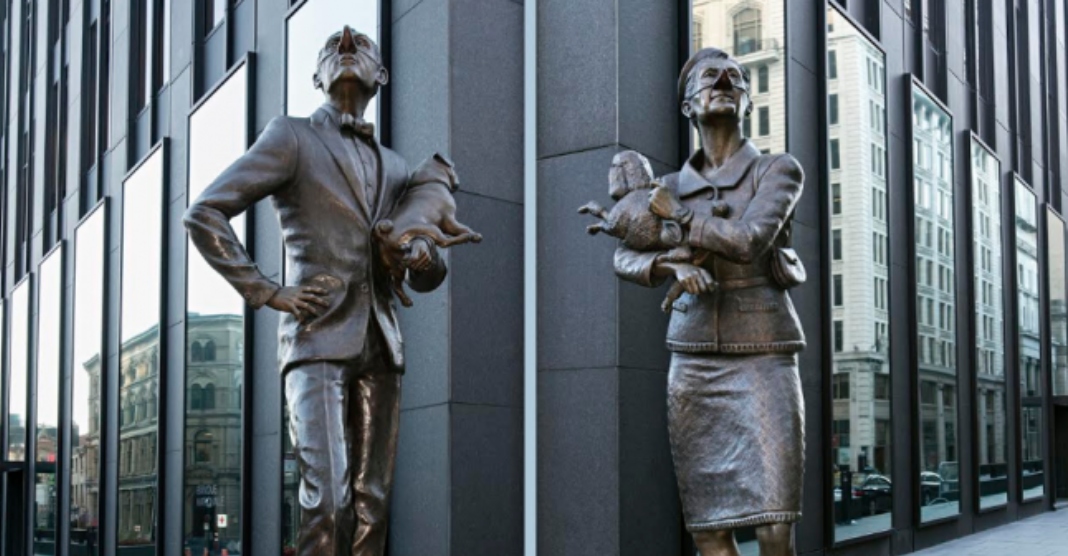 The next time you’re walking around Place d’Armes, be sure to direct your attention to the north and south corners of Notre-Dame Ouest and Saint-Jacques. You’ll find two statues. One of a man and one of a woman — each of them holding dogs.

If you’re a local, there’s a good chance you’ve passed the bronze sculptures dozens of times. It turns out that once you take a closer look you realize how perfectly they capture the essence of Montreal’s cultural history.

The art piece officially named “The English Pug and The French Poodle” was designed by local artist Marc André J. Fortier and installed in Old Montreal in 2013. It consists of a well-dressed Englishman, holding his pug, sticking his nose up to Notre-Dame Basilica. Parallel to him is a woman in Chanel-style suit, holding a French poodle, snobbishly glaring at the Bank of Montreal’s head office.

Local tour guide and city expert Thom Seivewright says the installation is one of his favourites in the city as it plays on the duality of the opposing French and English institutions. “Francophones were traditionally very Catholic. And the Anglophones were traditionally very business oriented. So the bank represents the business side of the Anglophones and the church represents the the spiritual side of the francophones,” he explains.

Seivewright says both out-of-towners and Montrealers get a kick out of the art installation when they learn the significance. He adds that the most interesting and perspective-shifting part of the piece, perhaps, is that both the man and the woman’s cartoonishly pointed, upturned noses are in fact masks, implying that under the façade of ignorance is a genuine person. “It’s a mask that society puts on you,” says Seivewright. “It’s not something anyone is born with.”

The dogs admiring one another is also a key element to the piece. Seivewright believes that unlike their masters who represent old-world values, the dogs are representative of more united future between the two cultures. “They’re not looking at the buildings. They’re looking at each other like, it’s like an Anglophone and Francophone discovering that the other is kind of cool.”

“Everyone gets a kick out of it,” says the tour guide. “The tourists see it as an insight into the local mentality and the locals, I think, get even more of a kick out of it because they feel seen.”