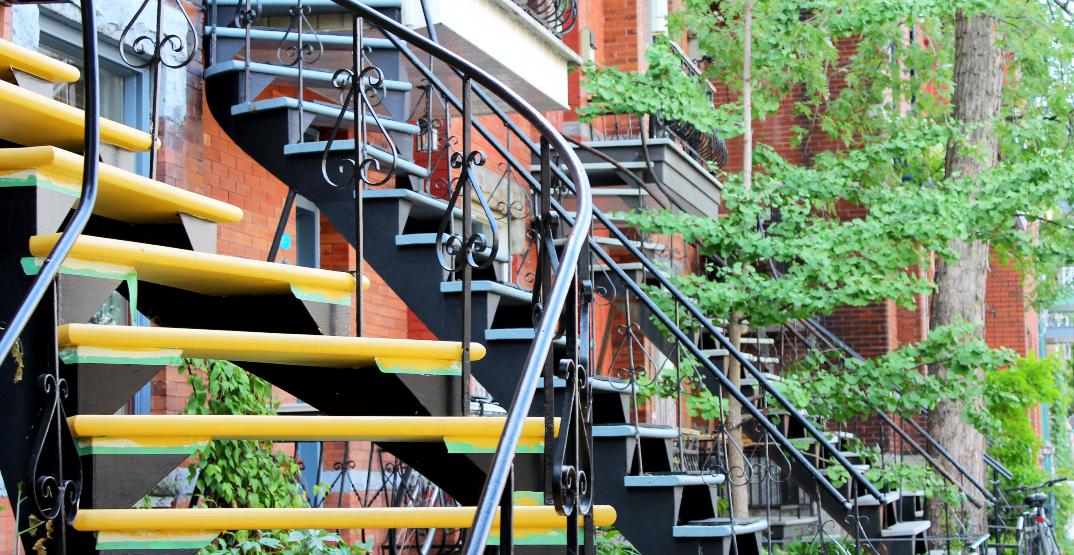 Much like the iconic fire escapes on buildings in Chicago and New York City, winding staircases outside of apartments have become a staple of Montreal. So much so, in fact, that back in 2012, the Musée Pointe-à-Callière included them on their list of the most iconic symbols of the city.

The twisty black stairs remain a common sight in neighbourhoods like Le Plateau, Ville Émard, and St-Henri. But how did these bizarre-looking and surprisingly steep iron structures come to be? Daily Hive Montreal spoke to local tour guide and overall Montreal expert Thom Seivewright to find out.

Acting as the main entrance for many homes, these stairs, which are often built in an S or L shape, were first constructed to solve Montreal’s problem with accommodating space for a rising population.

“When Montreal boomed between 1840 and 1880, the population doubled every 10 years.  the city was growing so fast because people were moving into Montreal from all the nearby country towns,” explains Seivewright.

“We think there’s a lot of construction in Montreal today but in the 1880s there was even more because the whole city was being built. At that time, officials made a few rules to sort of guide this construction. One of them that came about was forcing developers and investors to push the facades of the homes, away from the street.” These staircases were the solution, he says.

As a tour guide, Seivewright is quite fond of the structures calling them a unique “architectural symbol” of the city. “My favorite thing about the staircases is that not only did they create more space which was their ultimate goal, but they created a visual identity. They gave us an architectural symbol that you immediately associate with Montreal when you see it.”

The international guests on his tours are often fascinated by the functionality and one-of-kind architectural design. “They do often think that it’s weird that we have them considering our climate. That’s when I usually tell them ‘Don’t try to look for logic, just, it’s just what it is” he explains while laughing.

“But at the same time, don’t think I’ve ever met a tourist that didn’t think it was just beautiful. They all fall for the charm of it and they all see how, how lovely it is now charming it” adding that his favorite part of his job is “seeing Montreal through the eyes of visitors every single day”.

To book a historical tour of Montreal with Thom, visit toursmontreal.com.