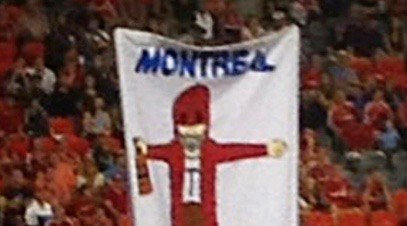 We live in a PC world.

People say things, other people get upset. There’s a back and forth for days about what’s appropriate, what was implied, who said what, and how they said it.

But sometimes something happens that we all get to agree just doesn’t belong. Call it bad taste, offensive, upsetting (the list goes on) but one thing’s pretty clear, it just shouldn’t have been said or shown at all.

How did you allowed this pass your security @torontofc unacceptable,sexist! As a woman& imfc fan I expect an apology pic.twitter.com/uoUudnLUSD

Yes, that is a woman on her knees in Impact blue in front of a man in TFC red with the added “Montreal is sucez,” or “Montreal sucks.”

You can imagine the bros who came up with this little piece of genius, discussing their word play and artistic flare in an endless series of brospeak exaltations: “This is gonna be soooo good, bro!” “Epic, bro!”

Except that it wasn’t. ‘Cause people are apt to find the depiction of a woman performing filatio in this context as debasing. ‘Cause, well, there’s no other way to really take it.

This sexist banner is a disgrace, what will you do about it, @TorontoFC / @MLS? #TFC #Tifo #TORvMTL #IMFC #MLS pic.twitter.com/v96YCoU3Vh

Hey, #TFC and #IMFC fans, it’s only soccer. It’s possible to have fun and stay respectful at the same time. No to racism, sexism & violence.

The Toronto FC has also come out against the sign:

@girlsloveIMFC not okay by any means. We are looking into it. I’m sorry.

It’s not clear yet what, if anything, can or will be done about the sign, but we can’t imagine another one going up anytime soon without security acting a lot faster.

But what do you think?

Is this just another case of people being too sensitive to a bad joke, or is this the kind of latent sexism that continues to exist in sports simply because we continue to let it slide by?

Let us know below: