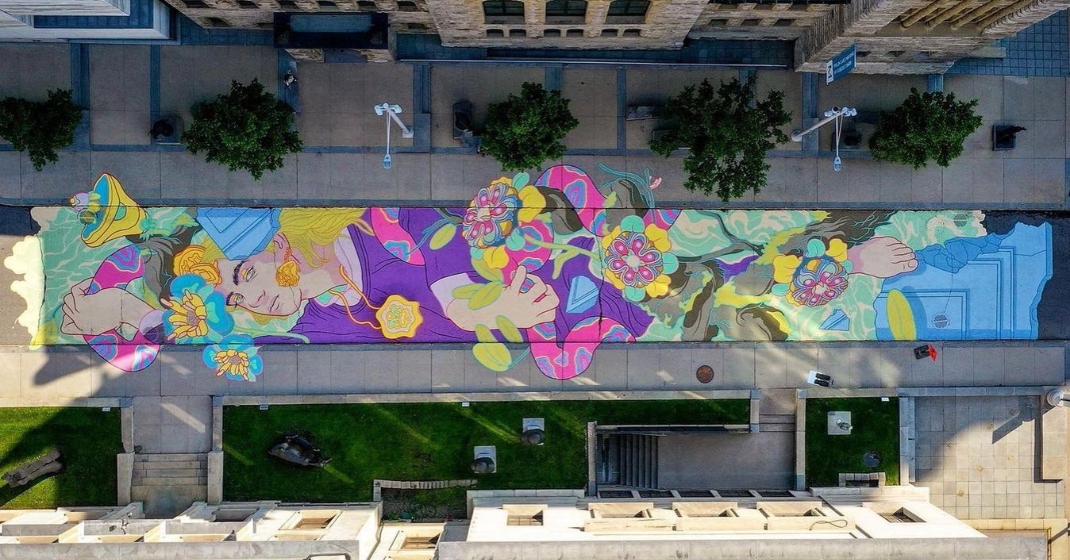 Montreal’s city walls have been blessed with more than a few wonderful works of art over the past month as a result of MURAL Festival. But while your eyes are peeled toward the town’s towering oeuvres, you may want to point your gaze downwards once in a while.

If you don’t, you may just miss a 3,500-square-foot masterpiece right across from the Montreal Museum of Fine Arts on du Musée street.

Niamh, the latest large-scale piece from Irish-Canadian artist, illustrator, and muralist Doras, was completed on June 2. It is a sight to behold — from multiple angles.

Although the 32-year-old artist has 19 murals under his belt, he told us this mural, which was produced in partnership with Montreal Museum of Fine Arts and MU MTL, was special to him.

“I was over the moon to have worked with the museum,” said Doras. “I go there often. So to be called for that. It was like such a surprise.”

The name Niamh and symbolism within the elaborate piece comes from Irish folklore, something Doras is quite passionate about. “These are just the kind of stories that I like to explore and redefine because I like illustrating Celtic. mythology in a way that isn’t stereotypically Celtic,” he explains. “I think it’s a much more accessible way to get the public thinking about our world through mythology. Not to mention the fact that the Irish population is really important to Montreal’s history.

The piece is also inspired by the themes of nature and time present in Nicolas Party’s ongoing exhibition L’heure mauve.

According to Doras, the best vantage point to observe the work is on the ground or from above, across the street from the museum’s large fourth-floor window.

If you have not had the chance to see the mural with your own eyes, you have the chance to do so all summer. The road will remain closed off to cars until October.