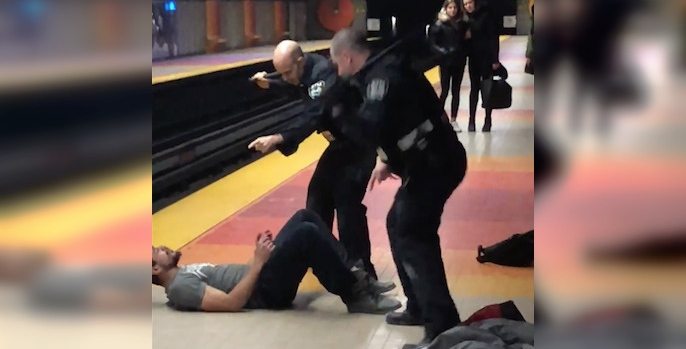 A video has been gaining traction on Facebook that shows two police officers at a Montreal metro station striking a man with their batons.

The video was uploaded by user Nzo Hodges who described the altercation as having started when the victim was “bouncing a basketball in the metro.”

The video, uploaded on Thursday night, has since been shared by over 2,000 people and has garnered over 96,000 views.

In the one-minute clip, a man is seen wrestling with two officers, clearly resisting their attempts to subdue him, at the Orange Line’s Villa Maria metro station. The two officers can be seen drawing their batons and striking the man, despite him screaming, “ça fait mal.”

After a couple more strikes to the man’s legs, the man narrowly bumps against an oncoming metro train before sprinting down the station’s hallway.

Neither the STM nor the SPVM have released a statement in the aftermath of the incident.