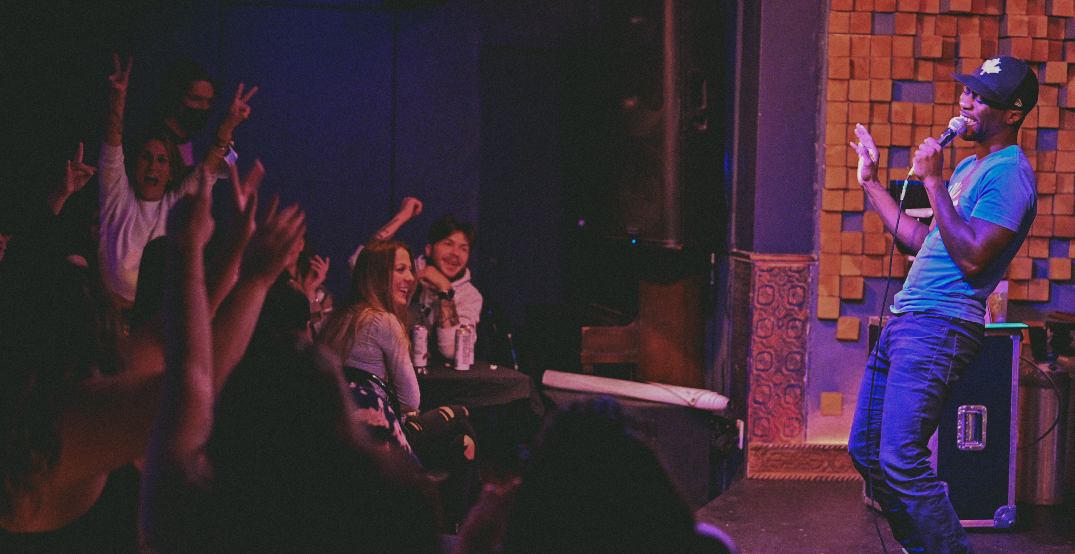 While the whole world is taking shots in the arm, a new comedy club in Montreal is giving away shots for your mouth.

Montreal may be the mecca of stand-up comedy, but the city’s English comedy scene has taken a big hit since The Comedy Works had to close its doors in 2018 because of a fire.

Kickback offers the entire venue a free frozen shot of booze before every show, including the comedians.

In a phone call with Daily Hive, Kickback’s producer Micah Sullivan says the pop-up comedy club is quickly becoming the most boisterous show in town.

“It was a dry comedy scene here,” he tells Daily Hive. “Montreal was sort of stale, there was something missing, and we thought we could add to it, so we made it rowdy. The city has a reputation here, but everything that is funded is in French. It was a no-brainer; we needed to give some love to the English comedy scene.”

Sullivan, who also serves as the venue’s DJ, says the overall goal is to “enhance the comedy show experience in Montreal,” and what better way to do that than funny comedians and free hooch?

Eva Alexo, the show’s co-creator and producer, says Kickback is more about just the booze though. “We just wanted to create something that felt more like a curated experience,” she told Daily Hive. “We collaborated to build a new standard for comedy where comics feel its worth it to stay here in Montreal. We want to expose Montrealers to the best comedians here in the city and the best in Canada.”

Alexo, a comedian herself who hosts every Kickback show, says they are prioritizing building a community with the audience and more importantly, paying comics. “English comedians don’t really get paid,” she continued. “That was important to us. We want to treat comedians properly while creating an experience for the audience.”

She says from 8 to 9 pm before the comics take the stage, guests can have as many free shots as they want, courtesy of Ufrost, the show’s sponsors.

Alexo says the shots help to build a “sense of community” that unite the audience and performers, forming a sense of family and togetherness.

The shows take place on the last Saturday of every month at an ever-changing venue. November’s performance takes place on Saturday, November 27, at a “secret venue,” according to Sullivan.

Comedy fans (and free shot enthusiasts) will have to follow the Kickback social channels to find out where November’s show will be held.

Each show has five comics, a special guest headliner, a musical act, and an afterparty with Sullivan spinning tunes into the wee hours of the morning.

Since its inception, Kickback has attracted some of Montreal’s most prominent English comics, including Just For Laughs vets Harrison Weinreb and Wassim El Mouzner, along with mainstay comics Alexo, Rodney Ramsey and Michelle Furtado.

The show’s next lineup will be announced soon, leading up to the venue’s big November 27 show.

Bottom’s up, comedy fans. Here’s hoping the show’s comedians will have you rolling around on the floor instead of the booze.

But hey, no judgement here.