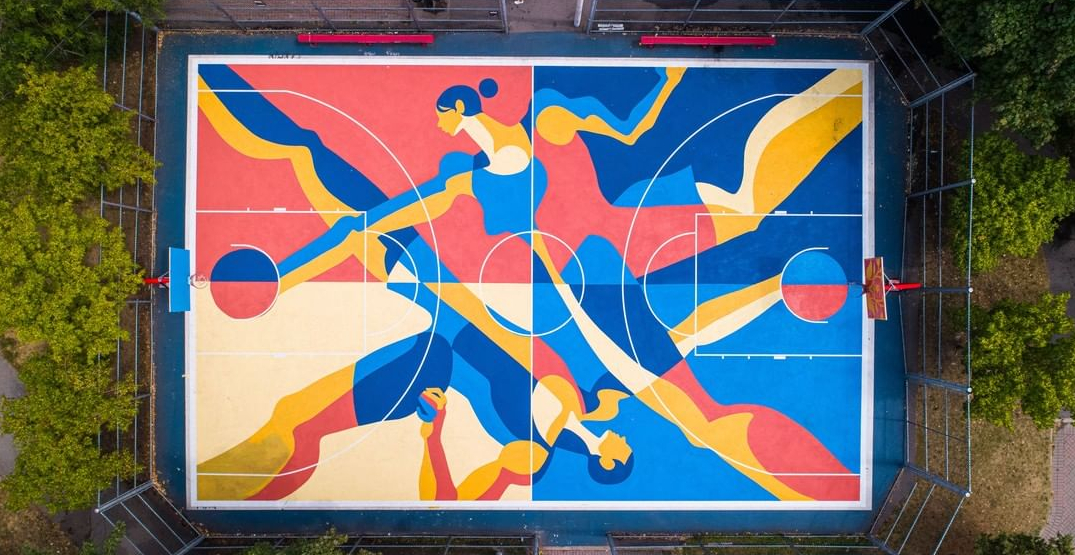 Is it a basketball court or an art installation?

That’s a question that’s likely to pop up when people see the stunning new basketball court that the NBA, Hennessy, and Montreal’s own MURAL Festival have teamed up to create. The answer, of course, is both.

Daily Hive spoke with Francorama, the artist behind “Hidden Court,” which dazzles at Parc Soeur-Madeleine Gagnon in Little Italy.

Located in Parc Soeur-Madeleine-Gagnon, “Hidden Court” was unveiled to the public last week.

Francorama, a visual artist born and raised in Montreal, was personally selected by the NBA and Hennessy back in May to design and create it. Both the basketball league and the spirit company gave the artist “creative freedom,” which he says allowed him to “make a piece that’s representative of the diverse community of people frequenting the court and make a work that enriches the neighbourhood.”

In the spirit of supporting local art, Hennessy announced that they will further solidify the value of artistic contributions in communities by making a $10,000 donation to L’Artothèque, an association selected by Francorama himself.

When asked why being an artist is important to him, Francorama said, “I’ve been holding a pen and tracing my lines ever since the age of three… Despite being called an artist, I do consider myself more as a seeker of moments inspired by the human experience.”

“Hidden Court” is one of many additions to Montreal’s annual MURAL Festival, which kicked off its ninth edition on August 12.