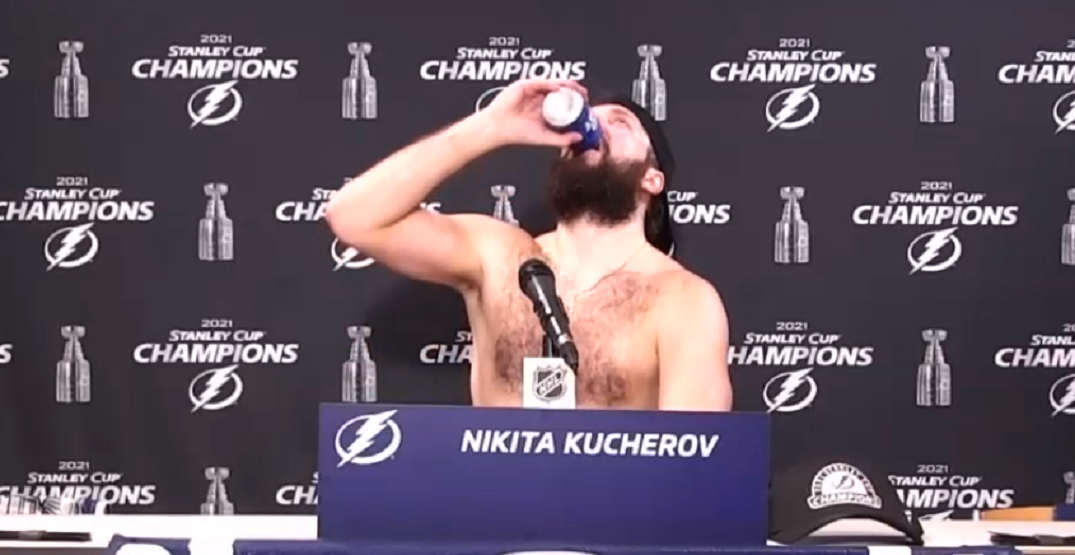 After winning his second Stanley Cup in as many years, Tampa Bay Lightning forward Nikita Kucherov wasn’t holding back on Wednesday night.

Starting his evening off with what appeared to be multiple cans of Bud Light, a shirtless Kucherov was having the time of his life at his post-game press conference.

When Montreal was able to get their first win of the series on Monday night, Canadiens fans acted accordingly, going wild in the streets of Quebec’s largest city.

But Kucherov wasn’t a fan of that reaction, implying that they still had a mountain to climb with three more wins needed to take the series.

Montreal defeated Vegas in six games to advance to their first Stanley Cup Final since 1993.

Kucherov appeared to have a pretty apt observation: the Lightning won the series in five games, outscoring the Canadiens 17-8 in the process.

Despite the Canadiens winning Game 4 on home ice in overtime, much of the matchup wasn’t really all that close.

Tampa Bay outscored Montreal 14-5 in the first three games alone, all three wins for the Lightning. As just one team in NHL history has come back from a 3-0 deficit in the Stanley Cup Final, most had finally written of the Canadiens at this point. It seems like you can probably count Kucherov in that group.

While a lot of people enjoyed the fun of a likely drunk Kucherov at the mic, some weren’t so happy with watching him throw some jabs during his celebration.

incredible? incredibly classless. Not to mention insulting Fleury, the very definition of class.

Sorry for being such a passionate fan base, Mr. Kucherov.

They say history is written by the winners, and in this case, it’s written by a man who was simply attending his first of many parties over the next few weeks.