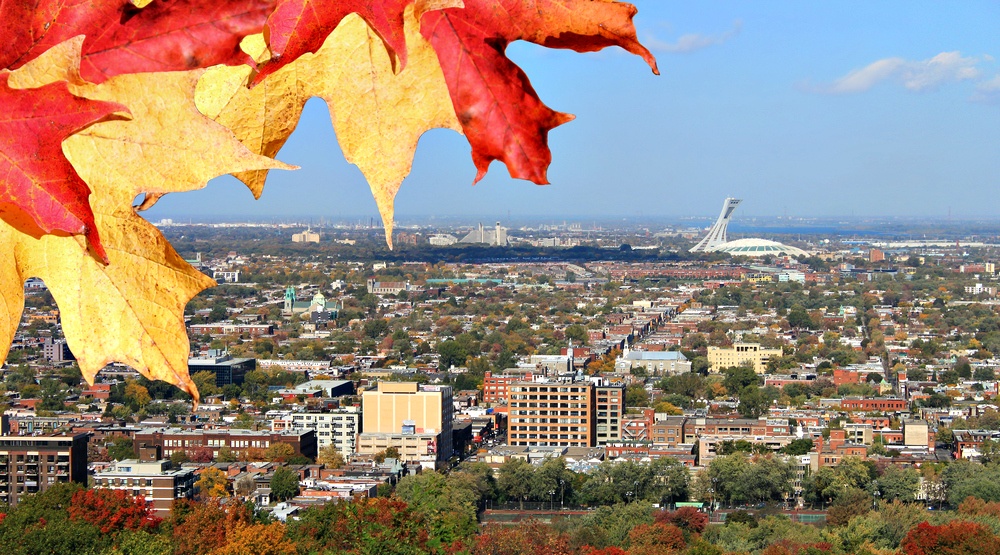 The weather is finally turning, the leaves are changing colour, and the city smells of pumpkin spice. Luckily, that is all now totally acceptable because as of today, it is officially Fall.

Now that Fall is here, why not make the most of it? After all, it is arguably the most beautiful season in Montreal.

Unsure of how to celebrate? We’ve got you covered. Check out all the activities you can do this Fall in Montreal.

Watch a short film at the Phi Centre

The Phi Centre’s latest art installation, Not Short on Talent, is bringing Canadian-made short films to this Montreal art institution. Not Short on Talent has been created in collaboration with Telefilm Canada, and showcases the eight short films of the #MTLMoments project lead by Tourisme Montreal. In addition to the eight #MTLMoments films, 10 other Canadian films have been selected to be part of the exhibition. All of the films hail from Quebec or Ontario, so it’s time to get your Canadiana film fill!
When: Wednesday to Sunday, 10 am-5 pm
Where: Centre d’Histoire de Montreal 335 Place d’Youville

Attend a show at the POP Montreal International Music Festival

Back for its 15th year, the POP Montreal International Music Festival is happening from September 21st until September 26th. According to the website, the festival’s goal is to deliver “a bold cross-section of art forms and events,” and in that vein, the festival includes concerts, symposium discussions, visual art exhibitions, fashion shows, ﬁlm screenings, and some raging parties. 2016 headliners include John Cale, the founding member of the Velvet Underground, composer and pianist Annette Peacock, and Canadian singer-songwriter, Hayden.
When: September 21-26
Where: Various locations, click here for a full schedule of events and venues.

When it comes to food trends, Montreal is on point. From freakshakes and rainbow bagels, to poke and smoothie bowls, Montreal’s food culture is as hip as it gets. Looking to try a bite of the latest food trend? Check out this complete guide to trendy food in Montreal and then head to one (or all) of the places listed. Be sure to have your Instagram ready!
When: Anytime
Where: Various locations

On September 24th, the City of Westmount is hosting Stargazing at the Lookout.
Members of the Royal Astronomical Society of Canada will be in attendance to answer any questions you may have about the planets or the stars, and telescopes will be provided. P.S. The event is completely free to the public.
Where: Mount Royal Lookout
When: Saturday, September 24, 5:30 pm

This extensive exhibition celebrates the work of the most important Italian fashion designers post-WWII. Organized by the Victoria & Albert Museum in London in collaboration with Holt Renfrew, it’s safe to say that this is one of the best art exhibits currently in Montreal. The exhibit features clothing, accessories, photographs, magazines, drawing, and film clips on a multitude of designers and their creations, and you have just three days left to see it!.
When: Any day of the week, until September 25th
Where: McCord Museum, 690 Rue Sherbrooke Ouest

Hit up Oktoberfest at the Atwater Market

Pumpkins and beer? Yes please. Oktoberfest is back at the Atwater Market this fall. This year’s Oktoberfest will feature 40 different microbreweries from all over Quebec. Set up under a traditional tent, craft beer can be purchased all day long on September 30th, October 1st, and October 2nd. The tent will be erected right at the entrance to the market so you can grab a pint before strolling through the stands of fall-themed goodies.
When: September 30th 1 pm-6:30 pm, October 1st 10 am-4:30 pm, October 2nd 11am-4:30 pm
Where: Atwater Market, 138 Avenue Atwater

The UQAM Farmer’s Market has returned to bring Montrealers the best fall produce out there. Open every Wednesday from August 31st until October 26th, the UQAM Farmer’s Market will be set up in Place Pasteur. Catering to all of your food needs, the market will feature produce and bakery stalls, ready-to-eat lunch options, and a diverse range of other healthy and locally sourced products.
When: Every Wednesday from 12pm-6pm between August 31st and October 26th
Where: Place Pasteur, Saint Denis Street between Boulevard de Maisonneuve and Sainte Catherine Street Est

There’s no denying that Montreal is unbelievably gorgeous in the fall. Mont Royal becomes a sea of yellow, orange, and red, the temperature is perfect for jeans and a sweater, and cafes start serving pumpkin-infused drinks. If you’re still a little sad that summer is over, why not pump yourself up by venturing outdoors and taking a few fall-tastic Instagram photos. Go for a walk up Mont Royal or just head to your local Starbucks and enjoy a pumpkin spice latte. You’ll quickly realize that fall in Montreal is pretty damn awesome.
When: Anytime
Where: Anywhere

Described as Montreal’s first ever festival dedicated to the city’s love of dogs, Dog Fest is coming to Montreal for two days only on October 8th and 9th. Dog Fest Montreal will celebrate all things dog-related. There will be 8 food trucks, 40 vendors, a DJ, live dog shows, and even a microchip station. Do not miss this afternoon of cute and furry fun!
When: October 8-9
Where: 3700 Rue St-Patrick (along the Lachine Canal, near the Atwater Market)

In celebration of the Montreal metro’s 50th anniversary, Heritage Montreal’s ArchitecTours is offering a two hour tour of various metro stations across the city. The tours began on August 27th at the Pie-IX and Viau stations and will finish on September 25th. The tours are meant to emphasize Montreal’s history. According to tour guide Bianca-Desiree Arciero, each tour tries “to emphasize the fact that the Metro stations are representative of the time in which they were built.” Nancy Dunton, head of Montreal’s public activities committee, added, “a Metro station’s size, lighting, materiality, colour and public art are all inextricably linked with Montreal’s history.”
When: August 27-September 25
Where: Various locations

Are you a fan of books, poetry, art, music, and film? Then Montreal’s International Literature Festival is for you. This year’s event will feature several unique exhibits, including “100 Years with Anne Hebert,” “Jack Kerouac: Life Is Tribute,” “Haiti Is A Party,” and “The Swallowed of Swallowed.” Additional events including live musical performances, poetry readings, book readings, and art expos.
When: September 23 – October 2
Where: Quartier des Spectacles

Gardens of Light is back by popular demand at the Montreal Botanical Garden.
As of September 2nd, the gardens will be lit up at dusk, inviting Montrealers to stroll along the paths guided by stunning multi-coloured lanterns. Inspired by Chinese and Japanese gardens, this year’s Gardens of Light will tell the story of the Son of Heaven, the Chinese Emperor.
When: September 2 to October 31, every day from 9 am to 9 pm
Where: Montreal Botanical Garden, 4101 Rue Sherbrooke Est

Watch a film at The International Black Film Festival

Pompeii may be over but lucky for us, an equally exciting temporary exhibition has taken its place at the Montreal Museum of Fine Arts. Titled “Focus: Perfection,” this temporary exhibit focuses on Robert Mapplethorpe, one of the most influential photographers of the 21st century. The exhibit hails all the way from Los Angeles and was curated by the Los Angeles County Museum of Art and the J. Paul Getty Museum in collaboration with the Robert Mapplethorpe Foundation. “Focus: Perfection” will track Mapplethorpe’s work from the beginning of his career in the 1960s to his tragic death in 1989.
When: Monday and Tuesday 10 am-5 pm, Wednesday 10 am-9 pm, Thursday to Saturday 10 am-5 pm, Sunday closed
Where: Montreal Museum of Fine Arts, 1380 Rue Sherbrooke Ouest

You only have one more chance to dance under the stars at Jardins Gamelin’s Salsa Saturdays. Anyone is welcome to join in Jardins Gamelin’s free Salsa Folie evenings. Unsure of how it works? Well, it’s pretty simple. You show up to Place Emilie-Gamelin at 7pm on any Saturday in September, and you dance the night away!
When: September 24 from 7 pm-11 pm
Where: Place Emilie-Gamelin