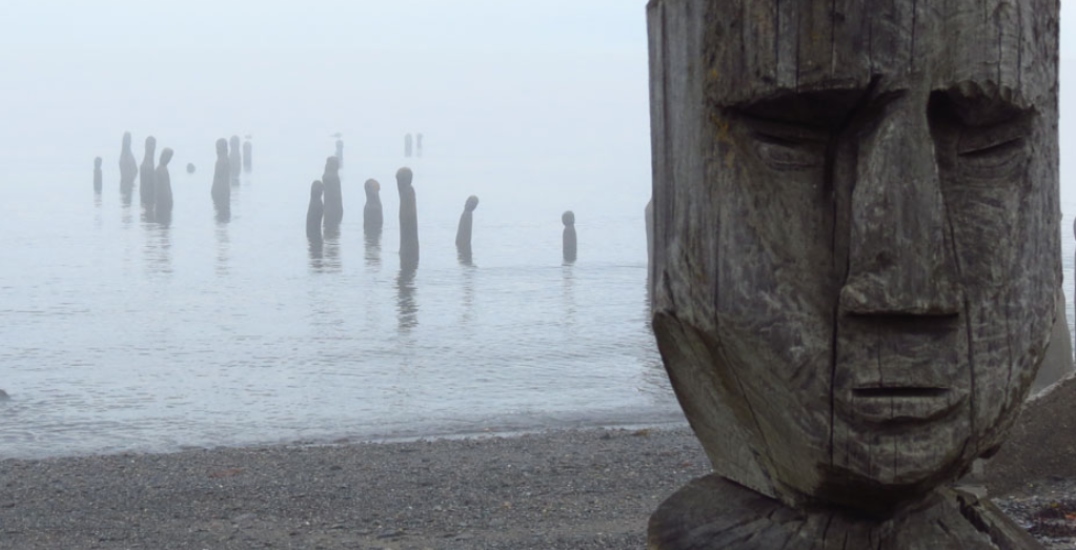 The St. Lawrence River is one of the largest in Canada, guarded by some pretty creepy human-sized statues.

As part of a large-scale art project called Le Grand Rassemblement (the Grand Gathering) by Quebecois artist Marcel Gagnon, more than 100 wood and stone statues appear and disappear with the tides in the small town of Sainte-Flavie, off the River’s coastline.

Most of the figures are armless statues (some as tall as adults) and are carved with faces and expressions.

Essentially, it looks like a zombie invasion retreating from the water.

The figures each weigh between 1,000 to 1,500 lbs and “come alive with the sea,” according to the artist’s French website. “They are playing with the tides and the oddities of nature, such as the rising sun, the setting sun, the mist, the moonlight, and the wind,” continues Gagnon. “In the evening, special lighting makes us experience all other emotions.”

At low tide, you can walk to the foot of the last group of sculptures, and at high tide, mostly all of them are completely covered by the river.

The newest addition to the eerie river guards is a series of tethered wooden rafts, which consist of more sculptures. When the tide is low, the raft sits on the sandy beach, but at high tide, the rafts look like they’re sailing.

Le Grand Rassemblement — which opened in 1986 — has nearby hotels and restaurants. It might be the ideal bucket list destination for Montrealers this spring and summer.

The art installation can be found at 564 Rte de la Mer, Sainte-Flavie, roughly six hours out of Montreal by car.

A post shared by M a u d e (@eduammaude)

It’s a relatively simple straight drive up the coast. You’ve hit the right spot when you see these haunting sculptures coming out of the river. Rest assured, it’s not a scene out of Game of Thrones or The Walking Dead.