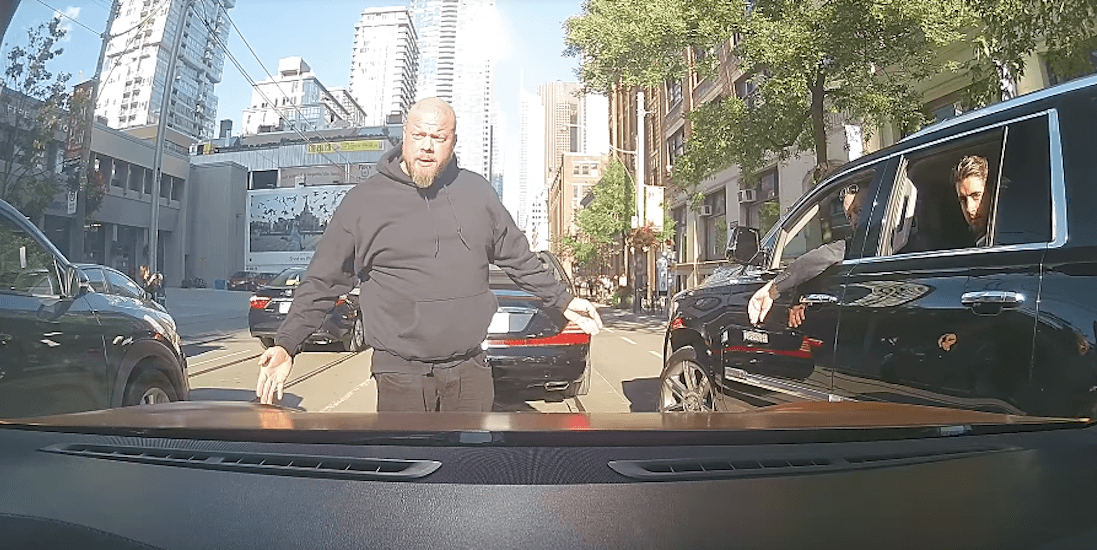 Drake stops traffic where ever he goes.

In this case, he did so somewhat illegally over the weekend.

Toronto’s very own was on his way to a TIFF party on Saturday, when his convoy of vehicles were caught in downtown traffic. At a traffic stop, the convoy of four vehicles, including Drake’s Maybach and three Escalades, were separated and his security team did not like that.

Caught on a dash cam, a security member exits one of the Escalades and begins to redirect traffic to allow the convoy to reunite. The video, uploaded by KushCam, has gone viral overnight, with many siding on the Toronto driver’s side.

“Security for TIFF apparently think they are the police and can stop traffic so Drake’s motorcade of friends can drive together,” wrote the poster of the video. “I didn’t want to be stuck in the middle of the intersection when it turned red and had right of way. Then the escalades drive in the bike lanes and the security guard stands in front of my car to stop me so they can go around me and threatens to take my Tesla. Do you think my reaction was justified, as I felt threatened.”

On YouTube, almost all the comments responding to the video are not impressed with Drizzy’s security moves.

“Your reaction was 100% justified,” wrote one user.

“Canadians are way too nice. Who the fuck stops traffic like that? Unless you’re the president no one should be able to do that,” wrote another.

As for Drake, he made it to TIFF on time, with his entire entourage. Clearly the vehicle behind him was needed for this picture.

And the other one was needed for this.

But most importantly, Drake made it on time for TIFF’s premiere of The Carter Effect, where he made us laugh and forget all about his threatening security team.