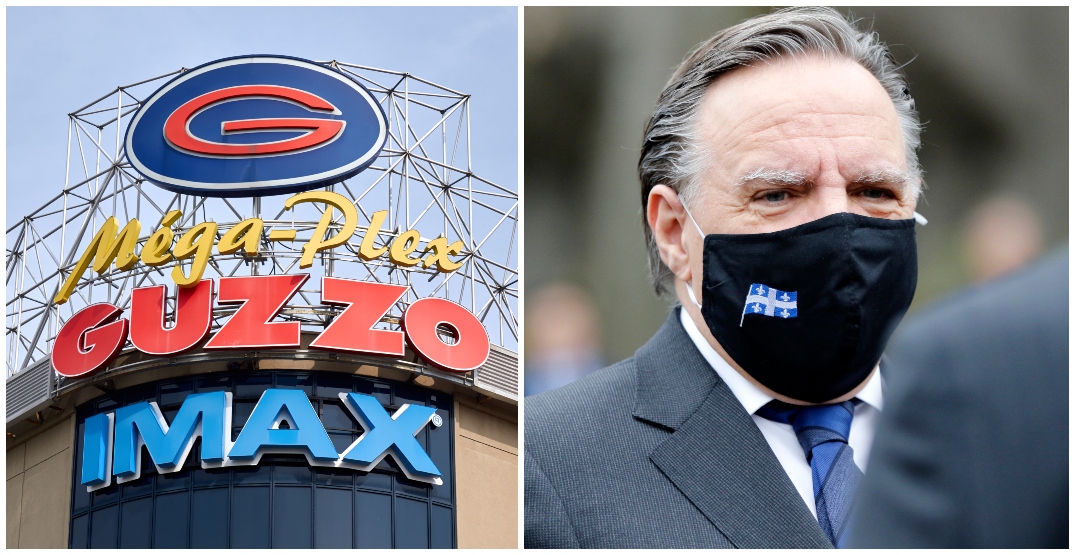 Few Quebec business owners have been more vocal in their criticism and resentment of the provincial government’s ever-changing COVID-19 restrictions than movie theatre tycoon and Dragon’s Den star Vincenzo Guzzo.

On Sunday the Cinémas Guzzo CEO once again spoke out against Francois Legault, this time in a series of tweets directed at the premier.

Guzzo, along with many business owners, was forced to shut down his chain of theatres as the province increased regulations and imposed a curfew last week.

The entrepreneur, known by many as “Mr. Sunshine”, shared images of Saturday’s curfew protest in Montreal to highlight people’s frustrations.

Only in Qc @francoislegault I guess that your definition of Distinct Society. 🤌🤦🏻‍♂️ @CNN https://t.co/qSbVg5iNxB

No one should be shocked. Most people followed all the rules with the promise of some form of normalcy to return. They feel duped, played. Like the saying goes: Fool me once, shame on you; fool me twice, shame on me! https://t.co/4wRIi1uhug @francoislegault

He also critiqued the government’s use of an amber alert to remind citizens that the curfew would come into effect on New Year’s Eve.

What a disrespectful use of an amber alert. @francoislegault this isn’t the appropriate use of this function. It was developed for children urgencies. Your curfew isn’t a child that needed rescuing urgently. Stop the amateurism. Show us the best of u not the wort of @cdube_sante https://t.co/no675sAPBP pic.twitter.com/65DrSg8Epv

I ask @francoislegault to be coherent for the first time since he is Premier and to stop ruining the lives & livelihoods of everyone who has followed ALL of his rules since March 2020. Me included.
To read my comments : https://t.co/nphdHOIC5d #StopTheCircus @CNN #ReopenCinemas

In the letter to Legault, Guzzo accuses the premier of exaggerating the “health emergency” to make it “easier to impose an already questionable curfew” and “expand the use of the vaccination passport”.

He also calls the restrictions “bogus” since the Omicron variant has caused less hospitalizations and deaths “than expected”.

The letter concludes with Guzzo pleading that Legault “stop ruining the lives & livelihoods of everyone” who has followed the rules and regulations “since March 2020”.

Along with a 10 pm curfew, current restrictions in Quebec include the delayed opening of schools, the prohibition of private gatherings, and the closure of places of worship, restaurant dining rooms, movie theatres and non-essential businesses on Sundays.