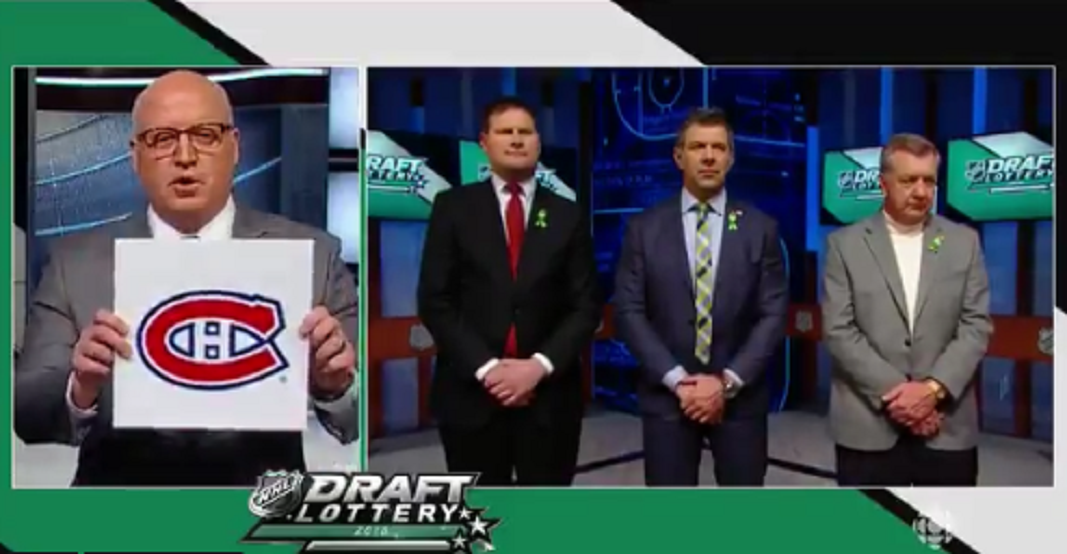 The Buffalo Sabres were the big winner at the NHL Draft Lottery on Saturday, winning the first overall selection. Second place went to the Carolina Hurricanes, while the Montreal Canadiens also got some good fortune.

The Habs will pick third overall, an outcome that wasn’t very likely when the day began.

The @BuffaloSabres will select first overall at the 2018 NHL Draft.

It’s a huge fortune of luck – though some may be disappointed after the few hours of hype created by this year’s draft lottery format. It was revealed the Habs would pick in the top three around 8 pm ET, but it was another two hours before the order of the top three was revealed.

Still, the most likely outcome was for the Habs to pick sixth (34%) and their chance to pick in the top three was under 30%, so they got pretty lucky.

You can be upset the #Habs didn't get the 1st overall pick or you can think back to the feeling of euphoria you experienced when they were guaranteed a top 3 pick while you were expecting the 6th.

It’s the second time in franchise history they are picking third overall. The other was in 2012, when they selected Alex Galchenyuk.

It’s not Rasmus Dahlin, but the Habs will be getting a very strong prospect at third overall and have plenty of options for who to select.

Right now, goal scoring winger Filip Zadina is slated by most to go third overall, though small and skilled defencemen Adam Boqvist and Quinn Hughes both have intriguing skill-sets. There’s also a chance Andrei Svechnikov, who most have pegged to go second, falls to  three.

If it is Zadina, the Habs are getting a guy with great finishing ability. A right winger from the Czech Republic, Zadina spent this past season in the QMJHL where he racked up 44 goals and 82 points in 57 games with the Halifax Mooseheads.

They could also opt to trade the pick. GM Marc Bergevin hasn’t been one to shy away from big trades, and there are a number of other teams who might be looking to move up in the draft.

Whatever happens, the Canadiens are better off now than they were 24 hours ago thanks to the NHL’s draft lottery.