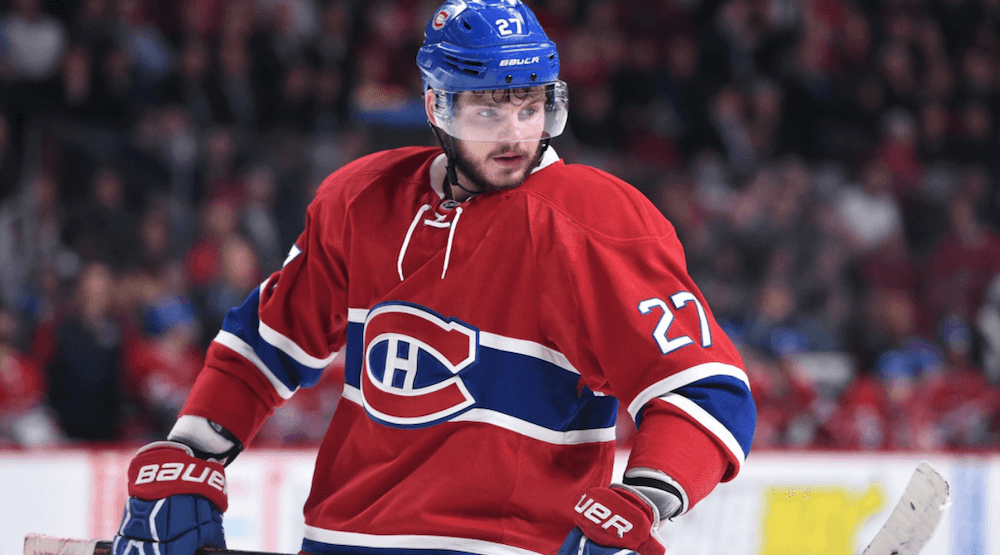 Expectations for the Montreal Canadiens are always high and not too many fans in the hockey world would have expected the Canadiens to be sitting in the basement of the Atlantic Division with a 4-7-1 record as of Halloween.

All kinds of negative chatter have popped up around Montreal in the wake of the Canadiens’ worrisome start; the most popular “angry mob” rumour is hoping that GM Marc Bergevin will ship forward Alex Galchenyuk out of town.

With only the first month of the long NHL season in the books, there’s still a lot of hockey left to be played. The Canadiens have won three of their last four games and are finally starting to find the back of the net. Alex Galchenyuk had a dreadful start to the 2017-18 campaign, notching just a single point in the first eight games, but now has scored in three straight and like his Canadiens, might be about to turn the corner.

Here are five reasons why the Montreal Canadiens should not trade Alex Galchenyuk.

Let’s not overlook an important aspect of Alex Galchenyuk – he’s still only 23 years old. He made his NHL debut at the tender age of 18 and has been a fixture on the Montreal Canadiens ever since.

You can’t put a price on age or experience. Galchenyuk already has five years of NHL experience on his resume, one of which includes a 30-goal season. His skills are undeniably impressive; he boasts a lethal, quick wrist shot and moves exceptionally well for a big forward.

Scoring is tough to come by in today’s NHL and the Canadiens have a player who’s already proved he’s capable of doing so. He hasn’t even reached his prime yet,
give this young flower some more time to blossom.

Every team’s worst nightmare is trading a player before he breaks out. Galchenyuk had a rough start to the season and everyone wanted him gone. Had the Canadiens dished him off while he was slumping they would have received a bag of moldy pucks for him.

Trading a player when he is slumping severely devalues his worth and the Canadiens wouldn’t have received the proper chips coming back. Imagine trading off a former third overall draft pick? The Canadiens would become the laughing stock of the league with only a player-to-be-named-later to show for it.

There’s a time to trade every player to get the value he deserves, a slumping Galchenyuk during a rough Canadiens start is not one of those times.

3. His off-ice troubles will fade

It’s not uncommon for NHL players to enjoy the nightlife. They’re travelling all across North America, staying in nice hotels, eating at good restaurants; they’ve been known to grab a late night drink after a game. There’s no need to punish a player for socializing.

Imagine if the Chicago Blackhawks traded off Patrick Kane following his boozy nights? You can’t compare Galchenyuk’s skillset to Kane’s but he’ll settle down and come to his senses as he matures.

Julien had a similar player during his tenure with the Boston Bruins in the likes of forward David Pastrnak. Pastrnak responded to Julien’s confidence in him by scoring 34 goals in a 70-point season in 2016-17.

Even despite his brief demotion to the fourth line, Galchenyuk needs to understand that Claude Julien has faith in him and Alex needs to rely on his coach’s intuition and his natural goal scoring ability to make the next step in being a dominant scorer in the NHL.

5. Habs have a bad history with premature trades

Longtime Habs fans know all too well that upper management has an unfortunate history of trading players before they ignite (ahem Ryan McDonagh). Perhaps after decades of swapping good players for bad pieces, the Habs finally understand a prized player when they have one.

Alex Galchenyuk has the talent to be a longstanding and contributing part of the Canadiens moving forward. With the right coaching and patience, Alex Galchenyuk can be massive producer in the bleu, blanc et rouge. Don’t panic everyone – we’re going to be all right.