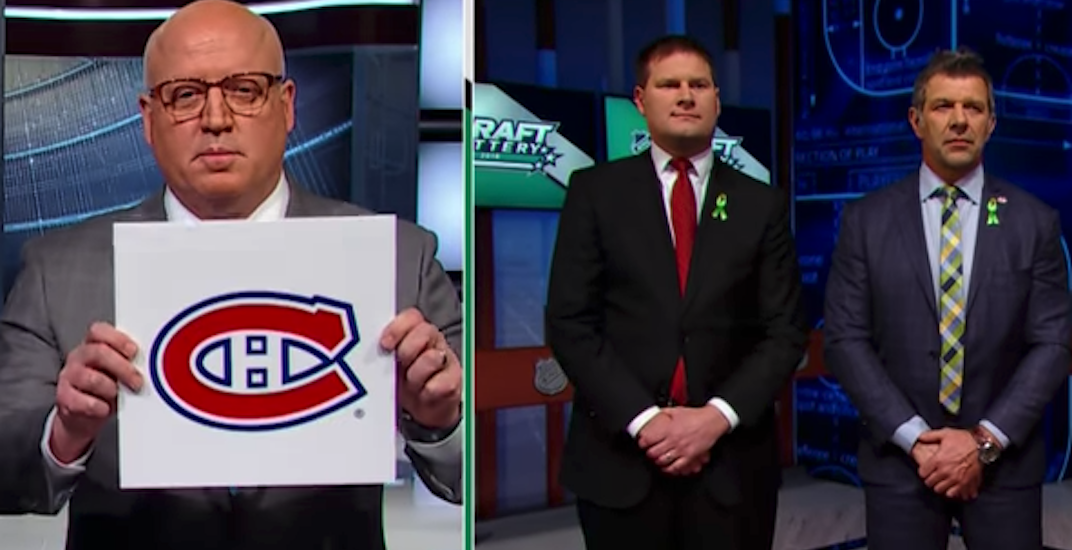 While they may not have been the clear-cut winners of Saturday night’s NHL Draft Lottery, fans can breathe a (small) sigh of relief that the Montreal Canadiens climbed up the totem pole.

The Habs managed to claw their way up to a third overall pick, beating out other Canadian teams (namely the Ottawa Senators and Vancouver Canucks) who had similar odds entering the lottery.

Thanks in part to a new draft format that took place over the course of Saturday’s Vegas/San Jose playoff game, fans were locked into a rollercoaster ride of suspense. By the time the first 12 picks were announced, the suspense skyrocketed when it was evident that Montreal would have a top-three pick in this year’s draft.

The question was, however, where in the top-three?

For about two hours, fans waited on the edge of their seat to see if they would win the right to draft franchise-changing, Swedish-defenceman Rasmus Dahlin.

Needless to say, making it past the initial lottery into a top-three slot was more than exciting news for Habs fans.

Habs Fans around the world pic.twitter.com/JJ9f8IxKl0

Tonight is the night the Hockey gods reward #Habs fans for the pain and suffering we had to live through this year! #GoHabsGo #NHLDraftLottery

I just celebrated like the #Habs won the Stanley Cup.

If Ramus Dahlin is going to be a bust anywhere, it better be the Montreal Canadiens

And although the Canadiens ended up taking the third spot, it’s still something to smile about, especially since lottery odds gave the team a higher chance of dropping to fifth place instead of moving up.

I count this as a win. Good day for the #Habs

Lottery is the jackpot, but I won’t be mad about drafting 3rd. Habs very well could have been outside the top 5. Still a big night ! #Habs

The #Habs will draft higher than I thought. A top three pick will be a very good selection, regardless of who it is. I won’t be disappointed at that. The real issue will be how Marc Bergevin handles the four second rounders and any trades, signings in the off season.

While it’s there are several options for the Canadiens come June, the hope is that some much-needed scoring ability joins Jonathan Drouin and the rest of the boys.

There was, also, a very interesting event that took place with one of the draft’s top prospects.