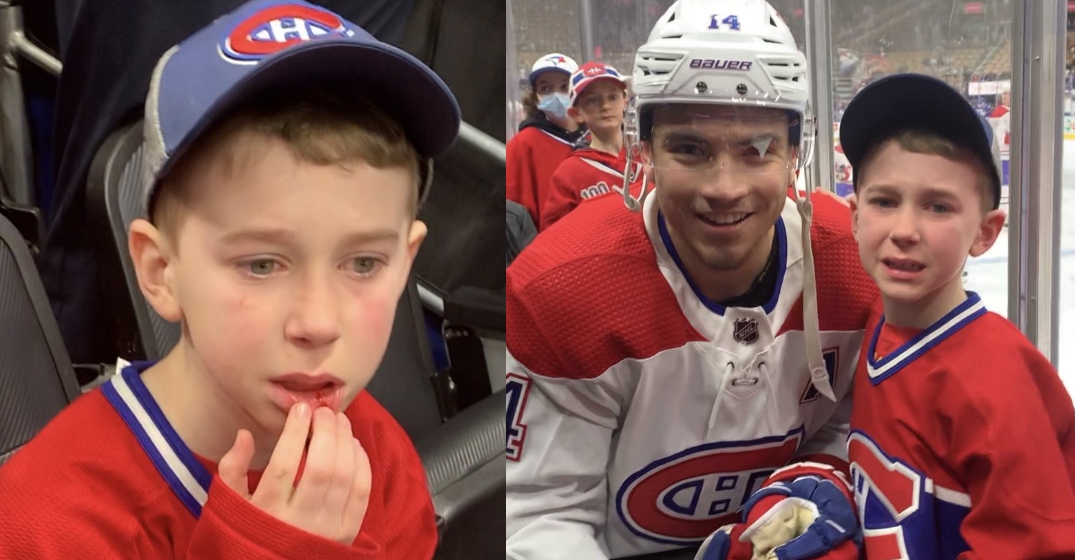 A young Montreal Canadiens fan went through a rollercoaster of emotions while attending Saturday’s game against at Scotiabank Arena. It was a rivalry game against the Toronto Maple Leafs, but all the drama for Hunter Beauparlant began before the first period even began.

As the pre-game warmups got underway, Hunter proudly flashed a homemade sign he made in order to get the attention of his favourite player Nick Suzuki. The 22-year-old Habs forward skated past the boy in the front row seat, and swiftly returned with a gift: a puck. In order to get the piece of hard vulcanized rubber to the fan, Suzuki tried to carefully toss it over the boards.

Unfortunately, it hit Hunter in the mouth. Suzuki, feeling bad about the unintentional damage he caused decided to make it up to the fan by signing the puck, posing for a photo, and giving the boy his hockey stick. Hunter’s father, Steven Beauparlant captured the heartwarming exchange and shared it to Twitter.

#NickSuzuki #14ClassAct @CanadiensMTL
Thanks Nick for taking a selfie & making sure Hunter was ok after he didn’t catch the puck you tossed him😂He loves the stick, puck autograph & Fat Lip😉A memory that will last a lifetime. Had to leave the game cause the stick wasn’t aloud🤣 pic.twitter.com/jtUoWRGxjM

Beauparlant says Scotiabank Arena staff informed him that he and his son would have to leave the premises if he wanted to keep the gift. The arena’s justification, according to the boy’s father, is that the stick is “considered a weapon.”

Ya it was kinda brutal, they said it’s considered a weapon 😂 poor kid had a busted lip and didn’t wanna lose his stick so we went back to hotel

As Steven’s Twitter post gained traction, fans on both sides of the rivalry became upset when they learned the story.

That’s ridiculous of them to do that. I’ve never seen that happen as kids always get sticks. Very disappointing by the staff there.

Is this for real?? You can’t tell me that the Usher or Security couldn’t of just stored the stick for the rest of the game?? @MapleLeafs someone needs to look into this

Someone owes that kid a hockey game for sure.

Daily Hive has reached out to the Toronto Maple Leafs and Montreal Canadiens for comment.

MLSE shared a statement, via TSN’s John Lu, that the Beauparlants left the game on their own accord when offered to check the stick with fan services.

A MLSE official provided TSN with this account of what happened at Scotiabank Arena on Saturday night. #Leafs #Habs https://t.co/vXGPhtmglQ pic.twitter.com/iT0nRujrDk