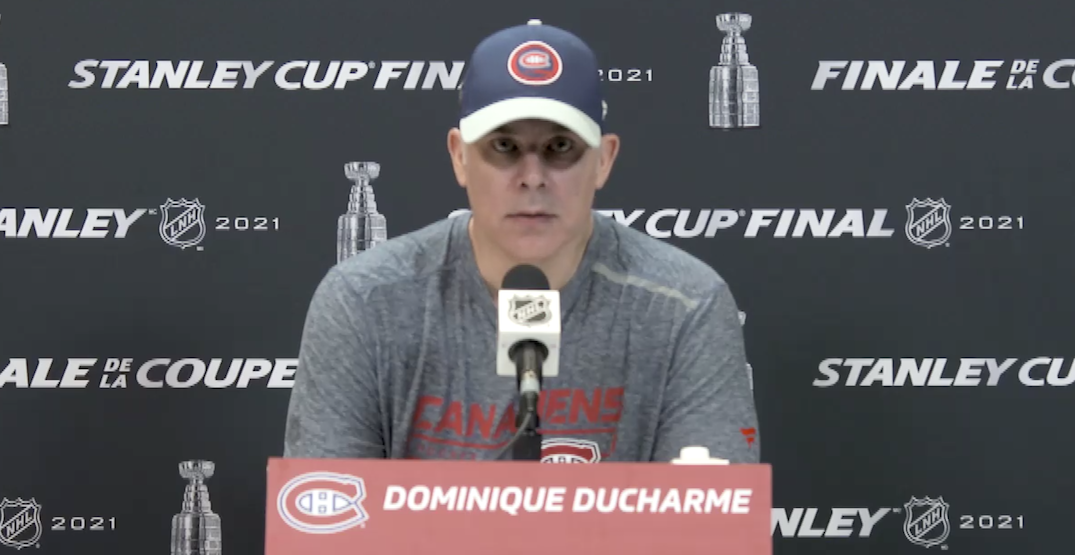 Montreal Canadiens head coach Dominique Ducharme is back, just in time for Game 3 of the Stanley Cup Final.

The Habs bench boss has been missing in action since testing positive for COVID-19 midway through the last series against the Vegas Golden Knights, on June 18.

“It’s not easy,” Ducharme told reporters today. “I love what I do and I love being with that team, that group of guys. Same thing with the staff. We’re working well together. To have that taken away from me was difficult.”

Attendance for the first Stanley Cup Final games to be played in Montreal since 1993 will be the same as was approved before Ducharme left the team: 3,500.

It’s better than nothing, but it’s certainly disappointing for hockey fans in Montreal, and for the team as well.

Answering a question in French from TVA’s Renaud Lavoie, Ducharme criticized the decision not to allow more fans into the arena for the Stanley Cup Final.

“Unfortunately, there’s going to be 3,500 people inside and probably 25,000 outside, all crowded together. It’s hard to find the logic.”

The Canadiens’ request to boost capacity from 3,500 to 10,500 was denied by the Quebec government on Wednesday.

With higher vaccination rates and lower case counts, the Canadiens pointed to the large space offered by the 21,302-seat Bell Centre, which is the largest arena in the NHL. The team was also willing to require proof of vaccination for entry.

Quebec reported just 69 new cases of COVID-19 in the past 24 hours, with hospitalizations and intensive care numbers decreasing also.

While increasing fan support would have provided a major boost for the home team, it doesn’t decrease the importance of tonight’s game. The Canadiens are down 2-0 in the series, and desperately need a win over the heavily-favoured Tampa Bay Lightning tonight to stay in the series.

For Ducharme, a first-year NHL head coach who remained in contact with his team virtually over the past two weeks, it’s a dream come true.

“Everyone dreams to be playing or being involved in the Stanley Cup Final. I’m so happy to be back.”