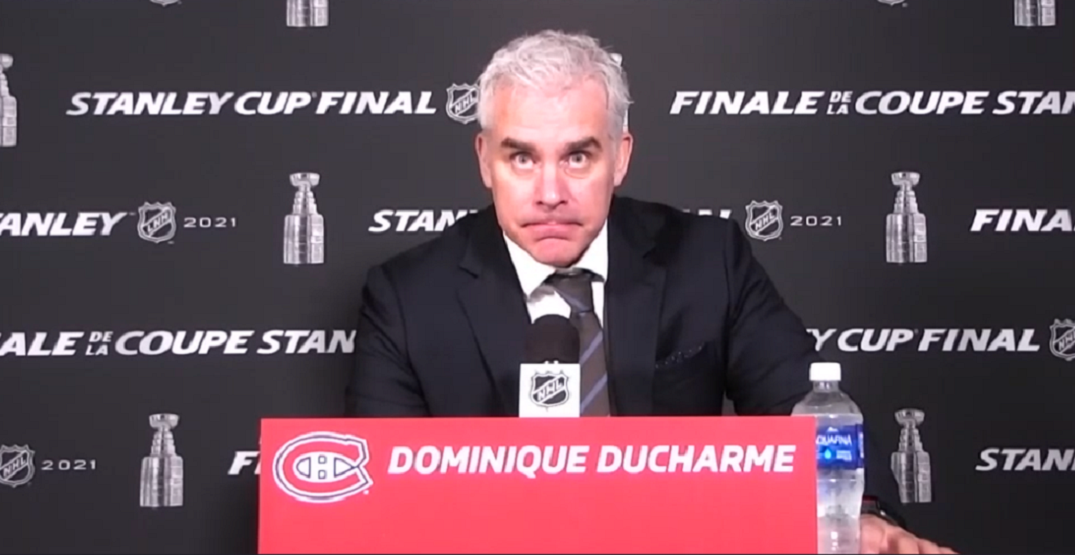 After losing a championship-clinching Game 5 of the Stanley Cup Final on Wednesday night to the Tampa Bay Lightning, Montreal Canadiens coach Dominique Ducharme detailed a lengthy list of injuries his team was battling in the series.

All of the players mentioned played through the injuries.

“I don’t know. I forget other things,” Ducharme said after finishing the list. “A lot of guys [are] banged up, but they fought. They bled, they fought, they never quit.”

Dominique Ducharme took over the coaching job for Claude Julien in February of this year, reaching the final in his first season as an NHL coach.

Ducharme’s Canadiens lost the final, four games to one, to a Tampa Bay team that won its second Stanley Cup in a row.

“It’s tough,” Ducharme said. “We were so close, but at the same time, so far. We would’ve liked to finish this off another way. I’m proud of my players. We fought, we never gave up, and we showed a lot of character. We showed that we were a united group.”

Meanwhile, Lightning forward Alex Killorn said after the game to Sportsnet’s Kyle Bukauskas that he broke his fibula in Game 1 of the final. He had surgery last week to put in a rod and was hoping to return but ultimately was unable to.

Canadiens captain Shea Weber also spoke about how the Canadiens were responding to the defeat.

“I think a lot of us are at a loss for words right now,” he said. “To be honest, it’s tough. Everybody knows that you play for this reason. You get so close, and you just can’t get it. We’re proud of everyone, but at the same time, I think we learned from this. Young guys and everybody takes experience from it.”