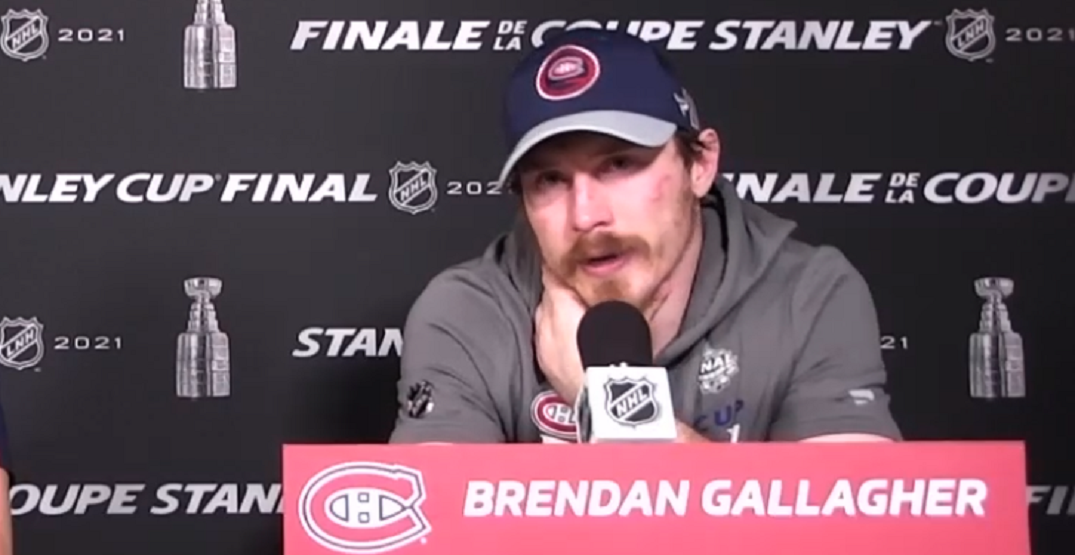 The Canadiens were defeated 1-0 by the Tampa Bay Lightning in Game 5, with the Lightning clinching their second consecutive championship in the process.

When asked what he’d say to his teammates, Gallagher kept it simple.

“Just thank you,” he said. “Every single guy gave everything they had every single night through this run. You look at our group. Obviously, there are a lot more talented teams, a lot of teams that do a lot of things, but there’s no team that is stronger as a group. The resiliency that we showed, it’s just a good team to be a part of.”

The Canadiens underwent a lengthy playoff run after finishing fourth in the North Division, with an underdog series wins against Toronto, Winnipeg, and Vegas. But Gallagher says the team never saw themselves as underdogs.

“We take nothing out of moral victories,” Gallagher said. “At the start of the year, we sat down as a group, and our goal was to be here. We expected to be here, regardless of what people thought of our team.”

Despite the Canadiens going further than expected, Gallagher says the outcome was still painful.

“The expectations were to win this series,” Gallagher continued. “I know we probably surprised a lot of people, but our expectations were to be the team celebrating right now. That’s why it hurts so much, because we talked about how much we believed, and I wasn’t lying. We believed in this group. It’s just a tough pill to swallow.”

“That’s why we won’t stop,” he said. “For both the group and myself, it’s out of the question that players like Gally, [Shea Weber] and [Carey Price] leave without getting their hands on that trophy. It’s a long road. I think all of the guys deserve another chance. It’s up to us to go after it.

Ducharme took over as head coach midseason for Claude Julien.

“Nothing’s guaranteed, and it isn’t easy, but we’re going to work at it,” Ducharme added. “We showed that we have a lot of resilience. We grew a lot as a group. Now, we’re going to use this experience the right way. We don’t want to finish with this feeling again.”