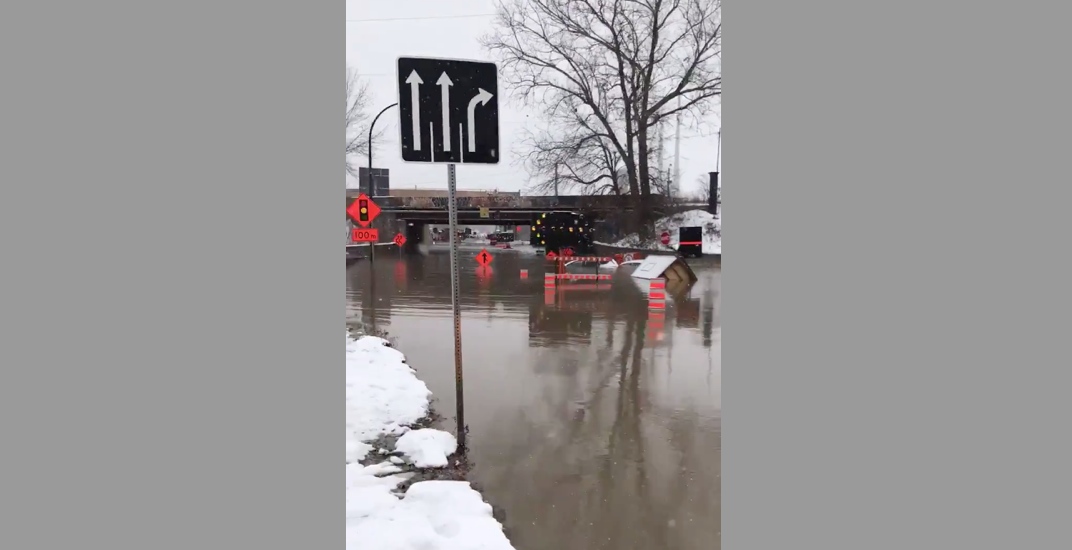 The Atwater Tunnel in the Sud-Ouest region of Montreal was completely flooded on Tuesday morning after construction workers cut through a live water pipe.

Water poured into the tunnel and two stranded cars were submerged underwater.

Located just south of the Atwater Market, adjacent streets around the tunnel were also flooded.

Montreal police and firefighters responded to the call at about 10 am on Tuesday morning and quickly closed off the streets around the flooded sector. Employees from Gaz Métro cut through a 24-inch water pipe while working, which resulted in the flood.

The tunnel, near Highway 15, is a main traffic artery for motorists but Sud-Ouest mayor Benoit Dorais, who was on site, claims that nobody is in danger because of the flood.

According to Dorais, three cars were almost entirely submerged underwater, all of which were vacant. The cars belonged to people working in the area and they all had time to exit the vehicles before the water got too high.

Montreal police are at the scene helping to direct traffic while firefighters and public workers from the City of Montreal work to shut off the water and clean up the mess.

The SPVM urge motorists to avoid the area. Atwater is closed between rue Notre-Dame and rue St-Patrick and the Atwater exit off Highway 15 is also closed.

Officials say the water will slowly be pumped into the city’s sewage system.

It is not yet clear how long the tunnel will remain closed.