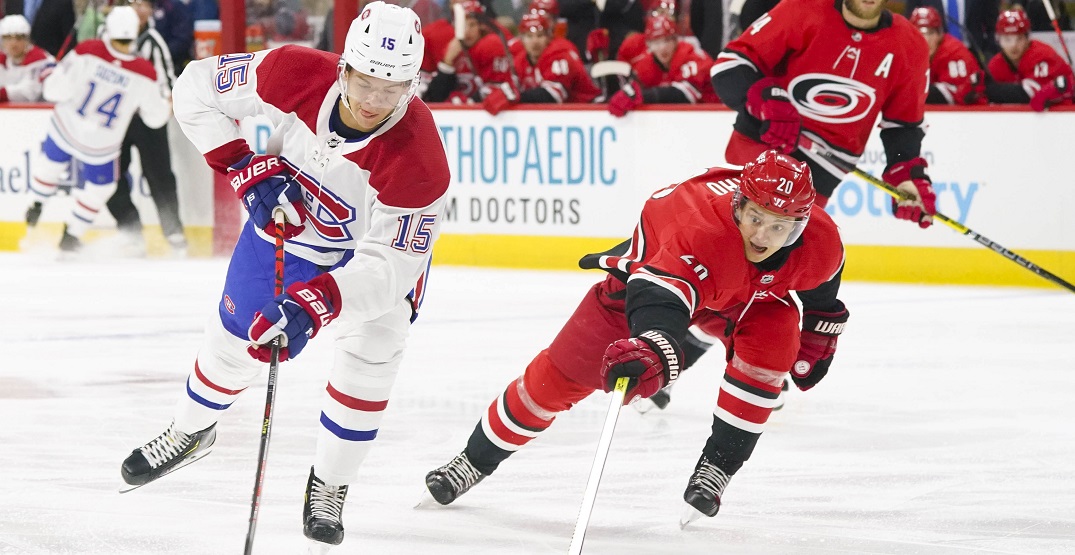 The Carolina Hurricanes are going full speed ahead in their pursuit of Jesperi Kotkaniemi, tendering the 21-year-old Canadiens forward to an offer sheet yesterday afternoon.

The Hurricanes signed Kotkaniemi to a one-year offer sheet worth $6.1 million on Saturday, with the Canadiens having a week to match.

Offer sheets in the NHL are rare enough, with teams choosing to not match them being an even rarer occurrence.

But here’s three reasons why it might be best for the Canadiens to walk from matching the Hurricanes’ offer, and accept the first and third round picks as compensation.

Kotkaniemi has shown flashes of greatness in the NHL, scoring five goals and eight assists in this year’s playoff run to the Stanley Cup Final.

But he also saw time spent in the press box as a healthy scratch in both the first round series against Toronto and the Cup Final against Tampa Bay.

Jesperi Kotkaniemi, tendered a 1x$6.1M offer sheet by CAR, has not seen the same success in the regular season as he has in the playoffs (boosted by a 23% shooting percentage) since he was a rookie. #LetsGoCanes pic.twitter.com/M9Yclyd40I

In the regular season, “KK” scored just five times in 56 games, adding 15 assists. In 2019-20, his second year in the league, Kotkaniemi spent time with the AHL’s Laval Rocket as he played just 36 NHL games where he scored six times and added just two assists.

His role in the Canadiens’ future is uncertain, and it could be best for all sides involved to give him a fresh start.

The return compensation is strong

It’s not every day you get offered a first and a third round draft pick for a player who’s yet to hit 35 points in a single season in the NHL.

Kotkaniemi could have a bright future ahead of him, or he could find himself plateauing at his current level of performance. He’s far from old, but he is 171 games into his NHL tenure and hasn’t really established himself as a threat on either side of the ice.

From Carolina’s standpoint, their team could be set up for a decline.

The Hurricanes went through a confusing offseason where they got rid of goaltenders Alex Nedeljkovic and Petr Mrazek, and let star defenceman Dougie Hamilton walk in free agency.

Perhaps most notably, they signed defenceman Tony DeAngelo after it seemed the league had blackballed him due to a history of behaviour that included maltreatment of teammates, pro-Donald Trump tweets, and a suspension while in junior hockey for the use of a racial slur.

It could be in the Habs’ best interest to roll the dice again and bet on Carolina regressing, and see what they can get from the Hurricanes’ 2022 draft picks.

His contract could be bad for the Habs’ salary cap

It’s hard to deny that Nick Suzuki and Cole Caufield are the two biggest young stars in Montreal. Kotkaniemi could be the third piece to that mix — and showed it in the playoffs — but he could also easily end up as a player who doesn’t see his performance match his contract.

Under the NHL collective bargaining agreement, because he signed the offer sheet, Kotkaniemi would need to make at least $6.1 million per year on any contract moving forward past next season.

The move would make Kotkaniemi the Canadiens’ second highest-paid forward, behind Brendan Gallagher at $6.5 million per season.

Kotkaniemi finished tenth in Canadiens’ scoring this past season. It’s hard to see a world where the Habs match the offer and come out on the better for it. For all parties involved, it might be best if Montreal moves on with a swift “thanks, but no thanks” decline and wishes Kotkaniemi all the best in Carolina.