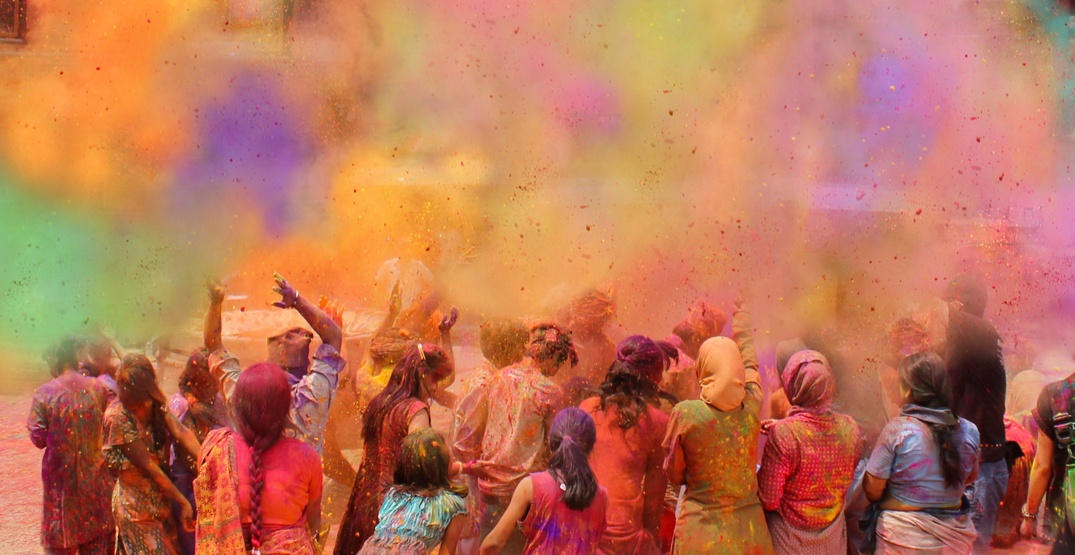 The colours of Holi. (Shutterstock)

If your life needs a splash of colour then you MUST check out Holi.

India is known for festivities such as Diwali but this one is by far the most vibrant! It’s even called the Festival of Colour. During Holi, people take to the streets to march, dance, and paint each other — all to celebrate love and the triumph of good over evil.

Holi takes place all over the world (even Surrey, BC!) but the biggest and brightest festivities unfold in India. This is because Holi is rooted in Hindu mythology, specifically Lord Krishna’s victory over the demon king Hiranyakashipu.

The event falls on the last full moon each March, according to the lunisolar calendar. On the eve of Holi, people light bonfires to ward off evil spirits in the ritual of Holika Dahan. The next morning, they take to the streets for a no holds barred paint fight with some music and dancing splashed in for good measure.

Aside from the rainbow of colours, another beautiful aspect of the celebration is that all members and castes in society are welcome to join the party. In a way, the holiday breaks down social barriers, even if only for a short window of time.

Many global travellers have flocked to India as recently as last week just to experience this bucket list festival. Here are some of our favourite photos!

Holi-proof your camera: Without a doubt, you will want to capture the Holi experience. Since neon liquid and powder will be splashed around with no regard for your expensive camera, the best way to do this is by Holi-proofing your device. Waterproof housing is best, especially for GoPros and DSLRs, but a ziplock bag should do the trick for phones. Keep in mind that the colour dyes are made of strong chemicals and will stain.

Holi-proof yourself: As mentioned, these harsh dyes stain everything including skin and hair (blondes, we’re talking about you!). The best way to combat being a living Jackson Pollock painting is to cover your skin and hair with coconut or olive oil prior to stepping outside. For added protection, wear a long sleeve shirt and wrap your hair up in a scarf. Since a mix of dyed powder and water are sprayed wantonly, wearing sunglasses will greatly reduce the chance of getting chemicals in your eyes (or colour under your contact lenses).

Wear white: It’s a good idea to wear clothes that you can dispose of as they are guaranteed to get dyed. We suggest sacrificing a set of white clothes as Holi’s colours turn up best on a blank canvas. If you’re after an epic photo, it’s also best to do this before the colours mix into muddy aubergine.

Be an early bird: Holi is an event that starts early in the morning and wraps up by noon. Be sure to get out the door in time to see it in full swing otherwise, all you will see is the aftermath: empty streets, brown swirls of mixed dye, and stray painted cows.

Watch out for bhang lassis: For locals, a component of the festivities is drinking bhang lassi, a cannabis-infused yogurt or buttermilk drink. In fact, it is used over alcohol. Travellers should be wary that others may be under the influence and order refreshments wisely.

Get paint in advance: You’ll find coloured powder on every corner prior to Holi. Since the festival starts early in the morning and most locals close their shops to participate, be sure to get your ammo at least a day in advance!

Hose down ASAP: To minimize staining, hose down soon after your celebration winds down. Also, keep in mind that dry skin will absorb more dye so use plenty of moisturizer and opt for mild products.

There’s also one more thing to watch out for during Holi and sadly, that is the issue of sexual harassment.

Unfortunately, multiple circumstances of female sexual harassment have tainted the experiences of festival-goers, some of whom have been surrounded, touched, or groped inappropriately. While greeting “Happy Holi” and spreading paint on others is part of the tradition and generally accepted, there have been increasing reports of this line being crossed.

Travel videos by Travel Beans and Deafinitely Wanderlust paint a picture of tarnished personal experiences and conflicted feelings. They also caution that crowds are predominantly male with most of the women present being foreigners, perhaps for a reason.

While these vloggers express the feeling that Western women are the primary targets, we have also learned that Indian women share similar hesitations about the festival. Mapped asked Delhi-based Prerna Dagi whether she felt the need to be careful during Holi. Despite being one of India’s leading female mountaineers and accustomed to curbing all kinds of fear, she replied:

“Yea, for sure. I think it’s mostly because you celebrate Holi by putting colour on someone and so somewhere in the festive flow, the consent to touch another person goes for a toss. For someone who wants to take advantage of this, it’s pretty easy. Mostly, the fear comes from the fact that a lot of people are drunk on bhang as per rituals during Holi.”

The good news is that there seems to be increasing awareness and resistance against these acts of harassment.

“Our government is working on this issue but I agree there is still a lot to be done,” Rishab Datta said in a YouTube video comment following another negative experience. He adds, “I’m very sorry for this incident and I hope this one bad incident will not stop you again from coming to India.”

At the end of the day, Holi is a once-in-a-lifetime spectacle that everyone should be able to enjoy. Rather than discouraging people from attending Holi, it seems that the intention behind sharing such travel stories is to inform and prepare future festival-goers with the hopes of preventing as many negative experiences as possible.

If you plan to attend Holi, be sure to do your research and consider other people’s experiences. Here are a few additional tips geared toward women and solo female travellers:

See how Hampi celebrates Holi in its own unique way here:

Enjoy but be safe out there!