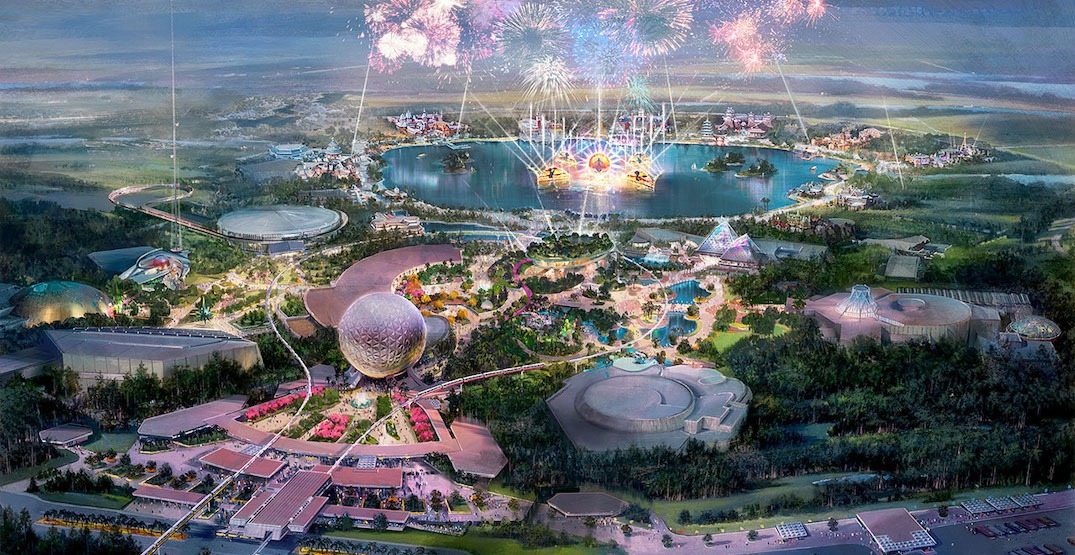 Artistic rendering of the full transformation of Epcot. (Disney)

It was a breathtaking weekend for the news on what’s coming to Disney theme park attractions around the globe, with the ‘House of the Mouse’ announcing sweeping changes and additions to its theme parks, particularly for Epcot at Walt Disney World Resort in Orlando.

The announcements were made during a presentation by Disney’s bi-annual D23 Expo in Anaheim held for its fans.

There was much anticipation over the company’s plans for the future of Epcot, which opened in 1982 and is the second oldest of Disney World’s four theme parks in the Orlando area.

The revamp of Epcot includes an expansion and rebranding of the existing two themed areas — Future World and World Showcase — into four new neighbourhoods, with World Showcase retained and the addition of World Discovery, World Celebration, and World Nature.

Epcot’s original theme gravitated around a futuristic technology showcase and a permanent World’s Fair of culture, cuisine, and architecture — the name itself actually stands for Experimental Prototype City of Tomorrow. And up until recently there has been little inclusion of Disney’s intellectual properties.

But that is set to change as part of this comprehensive renewal of Epcot that will make it more modern and timeless, which is a key component of Disney’s 50th-anniversary celebrations and renewal of Disney World.

Here is a rundown of all the changes coming to Epcot at Disney World:

1. New Guardians of the Galaxy attraction

An “other-world’ showcase pavilion based on Guardians of the Galaxy will begin with a planetarium-like exhibition that explores the similarities and mysteries of the formation of Earth’s galaxy and Xander.

There will be a new storytelling coaster at ‘Guardians of the Galaxy: Cosmic Rewind’ that rotates 360° to focus the rider’s attention on the action, including the first reverse launch on a Disney coaster. 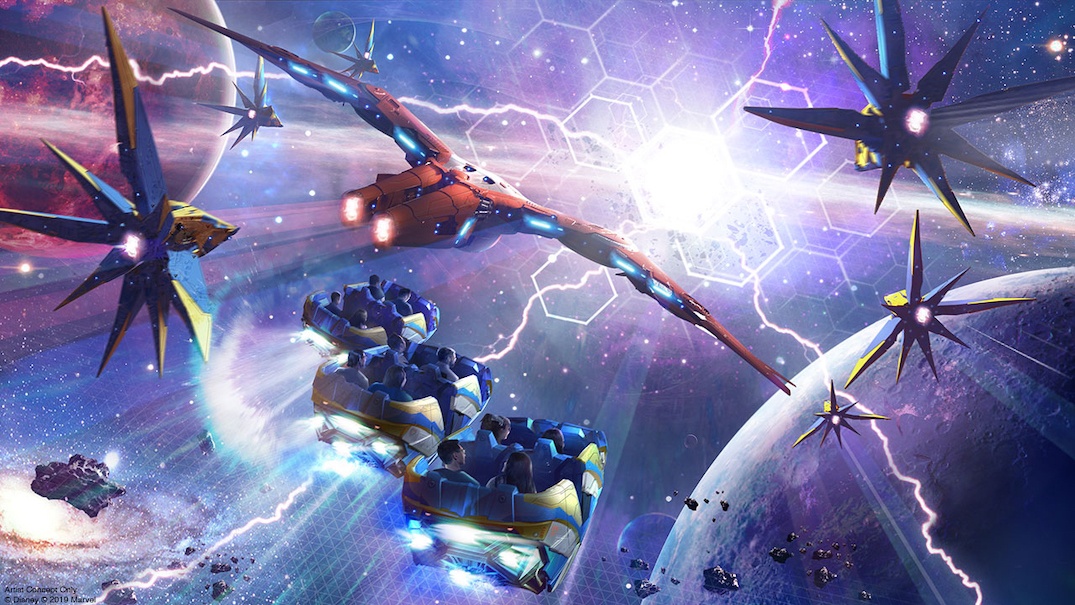 Artistic rendering of the new ‘Guardians of the Galaxy: Cosmic Rewind’ ride at Epcot. (Disney)

2. Restaurant in a space station

The Mission: SPACE pavilion will be expanded to include a new restaurant, Space 220, which provides a theme of a dining experience from a space station, including daytime and nighttime views of Earth.

Guests will board a special elevator for a journey to reach the space station. The restaurant opens in Winter 2019/20.

Artistic rendering of the new Space 220 restaurant at Epcot. (Disney)

The Spaceship Earth ride contained within Epcot’s iconic giant ball will be revamped to reflect recent advances in human history, complete with new narration and a new musical score.

After the ride, guests will enter ‘Dreamers Point,’ featuring a new statue of Walt Disney, plus new natural environments and global design elements, such as a wishing tree in an enchanted forest and a story fountain celebrating the power and music of iconic Disney storytelling.

Epcot’s entrance plaza will be transformed into a new welcoming experience, with features such as a reimagined fountain, new pathways, and green spaces — all paying homage to Walt’s original idea to build a utopian city on the same site. 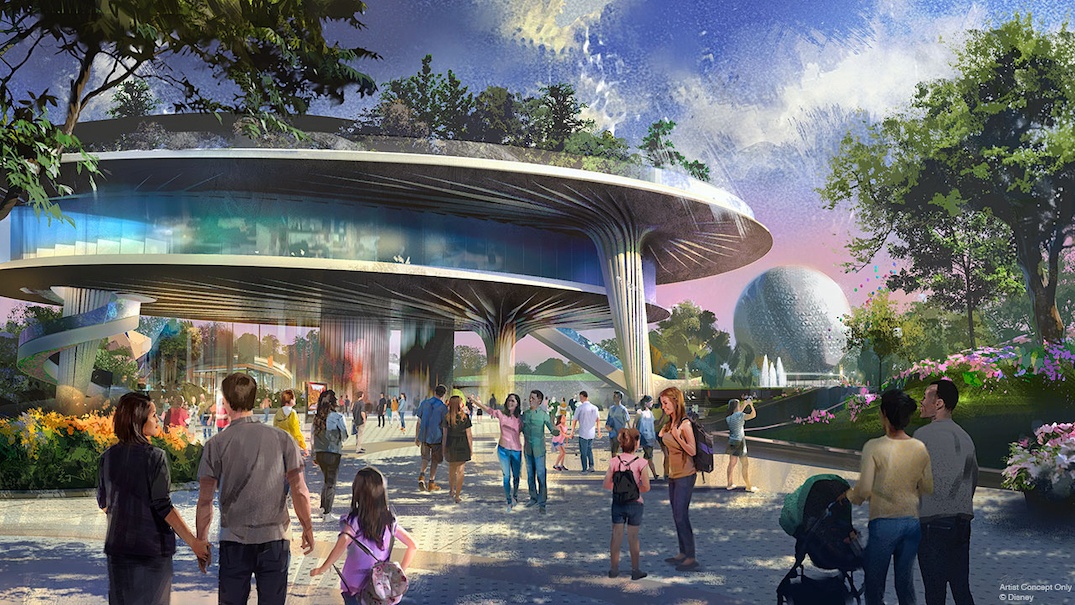 Artistic rendering of the new elevated pavilion at Epcot. (Disney)

As well, just beyond the plaza and golf ball, a new stunning elevated pavilion structure — inspired by Singapore’s Gardens by the Bay — will become one of Epcot’s most iconic landmark attractions.

The three-level structure, complete with a rooftop park, includes a plaza level and a middle expo level. It will be the new hub for live events, the location of Epcot’s seasonal festivals, and an optimal spot for the viewing of the nightly fireworks. 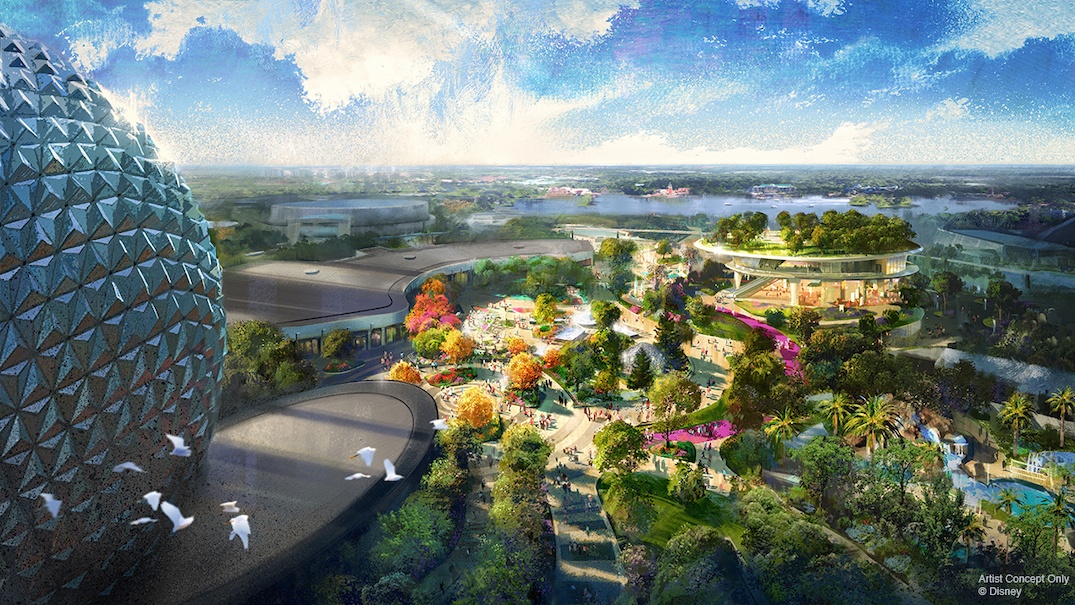 Artistic rendering of the new elevated pavilion at Epcot. (Disney)

The little laneway of the United Kingdom pavilion will be renovated and expanded to celebrate Mary Poppins, mimicking Cherry Tree Lane, complete with Number 17 — home of the Banks family. This is Disney’s first Marry Poppins-inspired attraction. 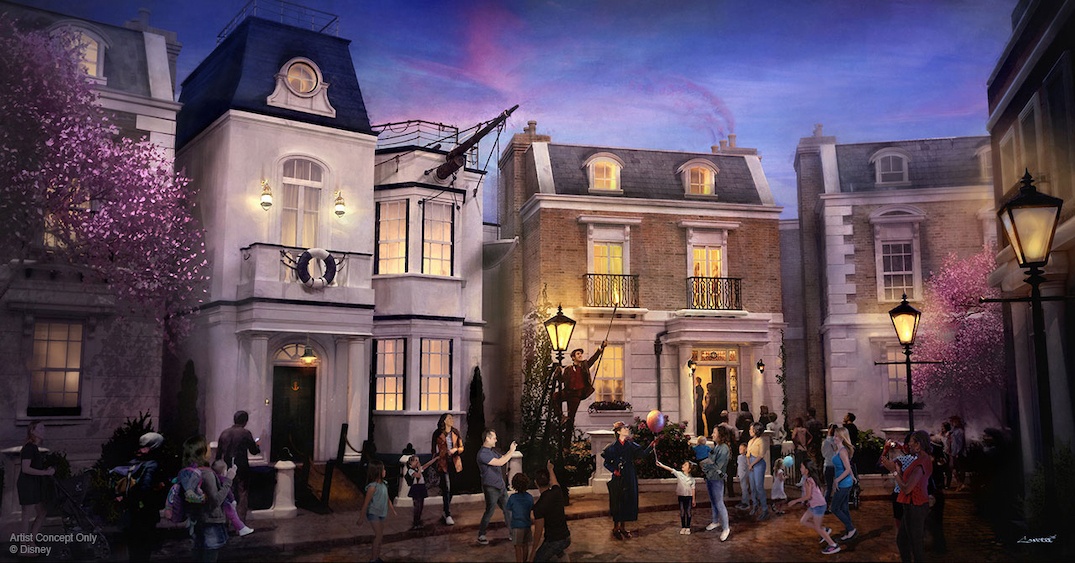 Artistic rendering of the new Mary Poppins attraction at the United Kingdom pavilion at Epcot. (Disney)

The Canada pavilion’s Circle-Vision 360° movie will receive a new film with a new story that showcases the scenes and culture of the Great White North.

‘Canada Far and Wide’ is a replacement of the original ‘O Canada!’ film, which was made in 1981 and updated in 2007 ahead of the Vancouver Winter Olympics in 2010.

‘O Canada!’ was closed earlier this month, and the theatre will reopen with its new film in January 2020. The attraction was originally inspired by the Circle-Vision 360° documentary film shown at Expo ’67 in Montreal.

Over at the China pavilion, a new ‘Wondrous China’ film will take guests on a journey across the country, filmed and presented in a 360° format as well.

Additionally, the ‘Impressions de France’ film at the France pavilion will be expanded to include a new Beauty and the Beast sing-along, beginning in January 2020.

More details have been released for the new Ratatouille ride opening at the France pavilion in the summer of 2020. Dubbed Remy’s ‘Ratatouille Adventure,’ riders will shrink to the size of Chef Remy and race through Gusteau’s restaurant on a wild adventure.

There will also be a new restaurant at the France pavilion, La Creperie de Paris, offering both table- and quick-service options from chef Jerome Bocuse.

Just in time for the 50th anniversary of Disney World, the PLAY! pavilion will be an “interactive city” with games, activities, and experiences that connect guests with friends, family, and Disney characters, both real and virtual. 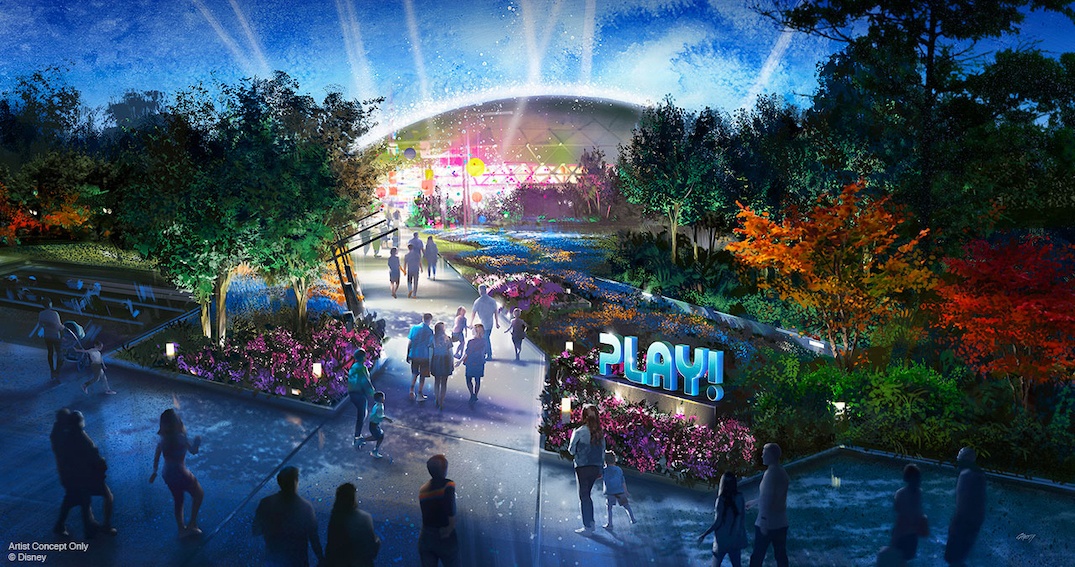 Artistic rendering of the PLAY! Pavilion at Epcot. (Disney)

To further enforce the creation of the new World Nature neighbourhood, a new walking trail experience — ‘Journey of Water, Inspired by Moana’ — allows guests to learn about the importance of the natural water cycle.

World Nature also entails the existing The Land and The Seas with Nemo & Friends pavilions. A new film, ‘Awesome Planet,’ will debut at The Land pavilion in January 2020. 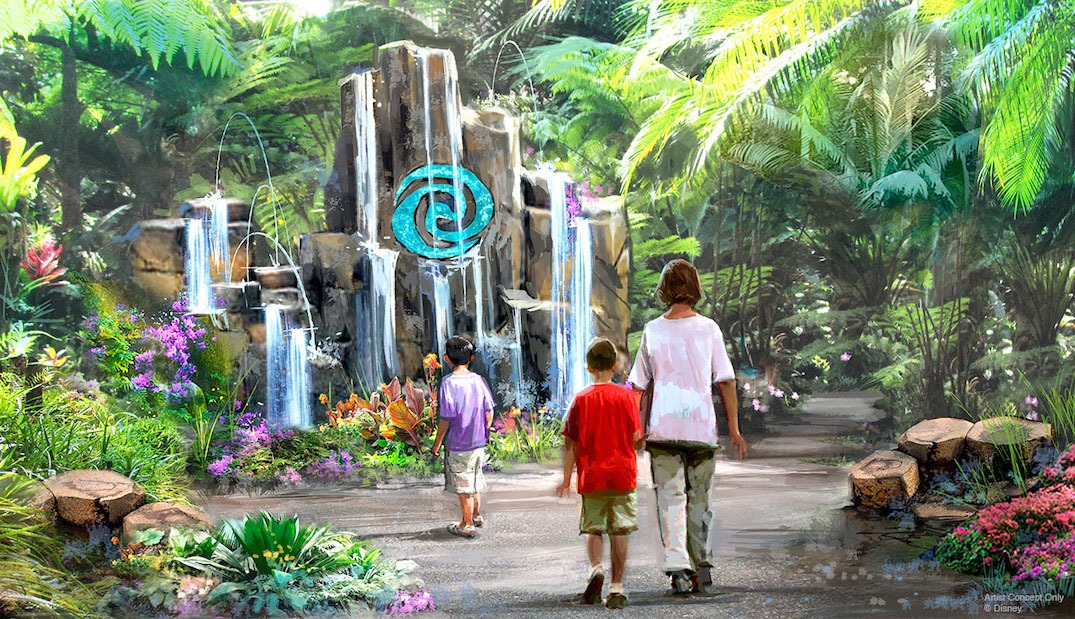 Artistic rendering of the new ‘Journey of Water, Inspired by “Moana”‘ attraction at Epcot. (Disney)

The new ‘HarmonioUS’ nighttime spectacular at the lake of World Showcase will debut in 2020, and it is being billed by Disney as its largest nighttime spectacular to date. This new multi-faceted show entails fireworks, massive floating set pieces, custom-built LED panels, choreographed moving fountains, lights, and lasers.

The theme of the new show celebrates how the music of Disney inspires people around the world, featuring a stream of popular Disney tunes reinterpreted by a diverse group of artists.

‘HarmonioUS’ will replace the limited-time run of ‘Epcot Forever,’ which will begin on October 1, 2019 — after the final run of the longtime ‘IllumiNations: Reflections of Earth’ show.

Other theme park and vacation properties at Disney World are seeing some new TLC from Disney Imagineers.

Outside of the theme parks, and supplementing the introduction of Star Wars: Galaxy’s Edge, a Star Wars vacation experience, called Star Wars: Galactic Starcruiser, offers guests a fully-immersive, two-night experience, where guests arrive and depart together just like a cruise.

They will ‘cruise the galaxy’ aboard the luxurious Halcyon, with guests staying in cabins, experiencing onboard dining, and making excursions to galactic outposts. 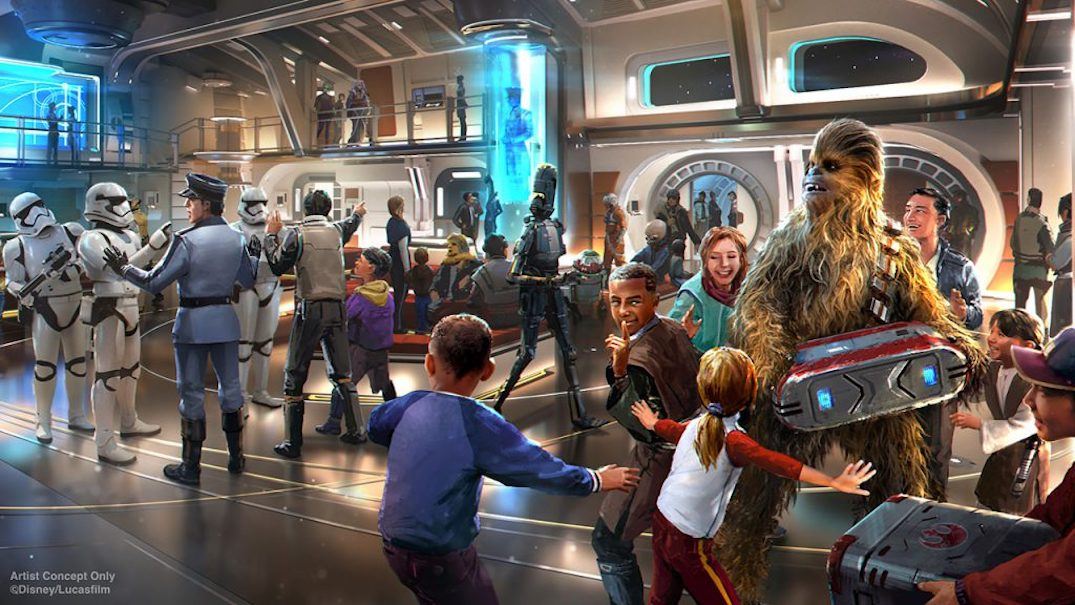 During D23, attendees were also provided with a first glimpse of the new ‘Mickey & Minnie’s Runaway Railway’ ride within the repurposed Chinese Theater at Disney’s Hollywood Studios. Opening in Spring 2020, this will be Disney’s first significant Mickey-themed ride-through attraction. 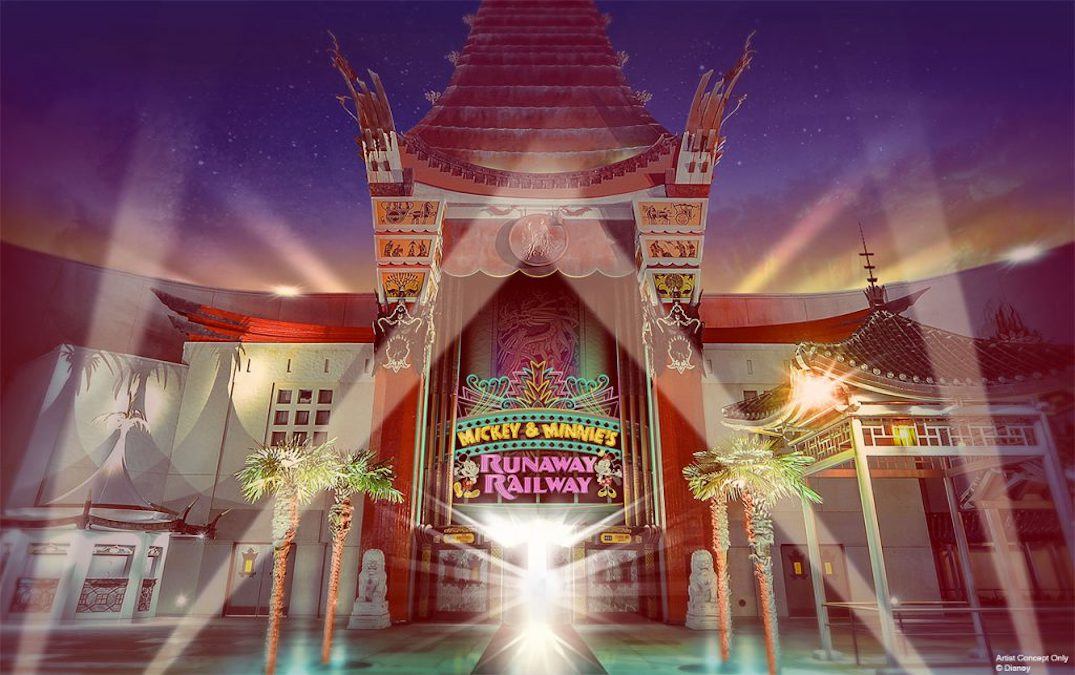 As previously announced, Magic Kingdom will be gaining the ‘TRON Lightcycle Run’ ride — the same attraction that made its debut at Shanghai Disneyland.

And beginning in Spring 2020, a new Cirque du Soleil show, in collaboration with Walt Disney Imagineering and Walt Disney Animation Studios, at Disney Springs will make its premiere. It will be the first time Disney storytelling is merged with Cirque du Soleil’s artistry.

Over the weekend, Disney also announced changes for other properties, including an expansion of Disney California Adventure in Anaheim.