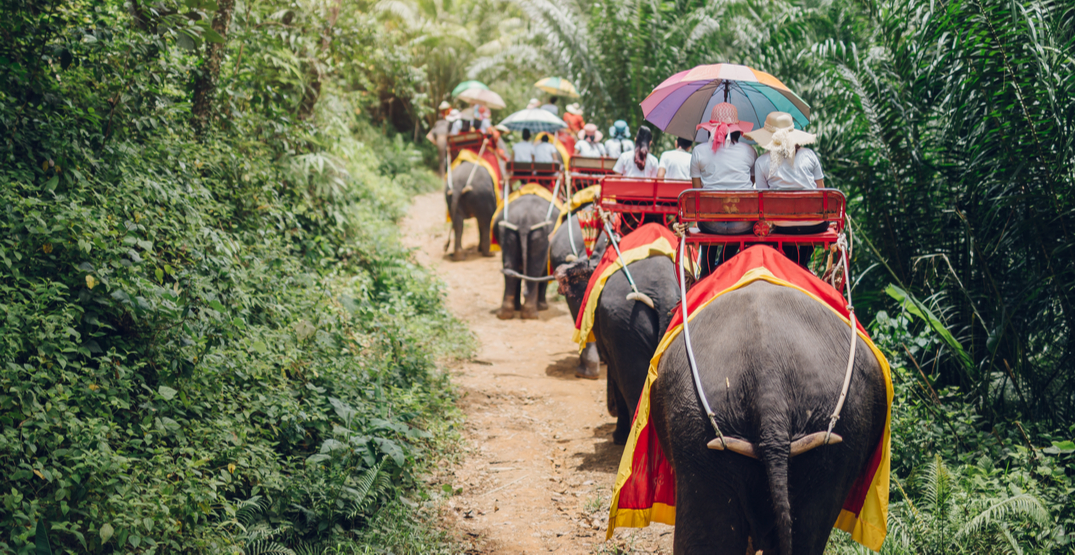 Disclaimer: This article contains images that some readers may find distressing.

World Animal Protection, an international non-profit organization that serves to maintain and preserve the safety and welfare of animals around the world, recently shared a heartbreaking video that illustrates the dire need to end the unnecessary and unethical captivity of elephants for tourism purposes. It also aims to project the broader message to abolish the global wildlife trade entirely.

This shocking, never-before-seen footage illustrates the despicable practices used to “train” elephants to be submissive to their handlers and, subsequently, tourists. Such methods include forcibly taking babies away from their mothers, restraining them to wooden structures while consistently beating them, and chaining their legs to decrease mobility.

“This undercover video exposes the hidden reality of the physical and psychological trauma of elephant training for tourist entertainment – a lifetime of horror for a ‘once in a lifetime’ holiday experience,” the organization explains.

According to World Animal Protection, approximately 2,800 elephants that have experienced this brutal training currently exist in captivity in Thailand alone. This footage was filmed to formally document and display the inhumane practices used to “break the elephants’ spirits.”

Such approaches include using a bullhook, a metal instrument that is used to prod at “sensitive areas,” restraining the animals with chains, and frequently exposing them to “stressful situations.”

These methods are used repetitively to wear the elephants down and make them compliant enough for entertainment purposes through activities such as live performances, riding, bathing, and other tourism-fuelled interactions.

Of course, elephants are beautiful, majestic creatures, and people are fascinated and eager for the opportunity to see and interact with them. However, this interest is precisely what drives and motivates the animal entertainment industry and these forceful methods, and until the demand for such experiences goes down, the practices are unlikely to stop.

However, perhaps one of the only saving graces of the current state of the world is that, due to the decrease in tourist demand, 85 elephant camps in Thailand have had no choice but to close, and those who are still open are struggling to care for their elephants.

A number of elephants have ventured across the country on foot to reunite with their legal owners. Others have been permitted to roam freely, overseen by their handlers who are having difficulty feeding them.

Unfortunately, some elephants have been transported to the logging industry to be utilized for physical labour.

However, thanks to the donations and goodwill of their supporters, World Animal Protection has been supplying funds for 13 “ethical, elephant-friendly camps across Asia” to aid them during these difficult times and ensure that their elephants are safe, fed, and cared for.

Still, the organization needs more support and is calling for a comprehensive examination and overhaul surrounding the treatment of elephants in captivity before international tourism resumes. The organization asserts that captive breeding of elephants should be banned to ensure that future offspring are not faced with the same devastating abuse.

It is also calling on travel and tourism companies to hold themselves accountable and revoke their support of these “unethical practices” and instead choose to promote experiences to view elephants in their natural state and environment or support elephant-friendly camps.

Most of these elephants are unable to be released back into the wild. Thus, endorsing and supporting elephant-friendly camps is their best shot at a better quality of life. These facilities operation on an “observation-only model” while still providing work and a livelihood for local populations, including elephant keepers, which are called mahouts.

In these locations, elephants are free to roam, graze, and bathe as they please while being able to socialize with one another without the stress of rides, restraints, and other harmful practices.

“We are at a turning point when it comes to our relationship with wild animals,” the global head of Wildlife at World Animal Protection, Audrey Mealia, said in a statement. “The tourism industry has come to a halt in the wake of COVID-19 but it will re-build – this is the ideal opportunity to build a better future. We are calling on the tourism industry to revise their wildlife policies and stop offering exploitative experiences to their customers.”

Animals should never be held in captivity for entertainment purposes or as a source of revenue, period.

Unless they are being rehabilitated, rescued, or are unable to exist in the wild on their own, they should be granted the same decency and respect as us to live without fear of exploitation.