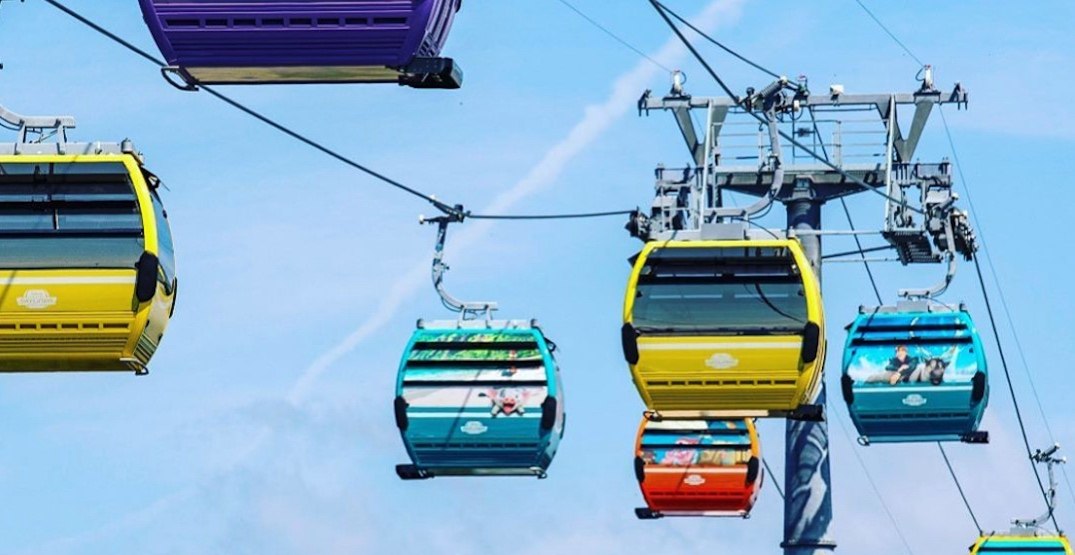 Walt Disney World Resort’s brand new public transit gondola system has shut down after an accident on Saturday night that stranded riders for up to over three hours.

Social media photos and videos show cabins bunched up and crashed at one of the terminals of the Disney Skyliner.

Local reports by the Orlando Sentinel indicate there were no injuries, but the rare gondola malfunction stalled the system during a busy night of the week.

A crash has occurred on the Disney Skyliner at the Riviera Resort Station. Evacuations taking place now. #WaltDisneyWorld #DisneySkyliner pic.twitter.com/1yEvTl9ECV

Riders stuck in their cabins shared on social media they were being urged by Disney cast members to open the emergency kits, containing water, first aid, human waste bags, and other supplies.

Some riders were rescued by firefighters equipped with fire trucks and tall ladders, while others reached ground after a slow process of slowly returning cabins back to the terminals when the system restarted.

Disney’s choice of notepads in the #DisneySkyliner emergency kit could have been better. #WDW pic.twitter.com/fEKb2USLdX

The gondolas have officially crashed! Guest are being evacuated now. Guest have been stuck for hours! No word if guest were in the gondolas that crashed. pic.twitter.com/5uUyMFW7an

Still stuck and they do NOT stop giving announcements about it coming back up. I don’t think it’s coming back. They got the repel bags out for the people over the water. #disneyskyliner pic.twitter.com/iPIrFVbB2L

Safely on the ground after being stuck on the #disneyskyliner for over 3 hours.. pic.twitter.com/FJRKP9I7Bh

USA Today reported Disney has issued an apology, and “continue to work with each [impacted] guest individually,” with stranded riders sharing that they received all-day park passes and a $200 gift card.

The Skyliner remains closed until further notice, as investigators work towards determining the exact cause of the malfunction and a solution to preventing repeat failures.

The new gondola officially opened to the public on Sunday, September 29, after a weeks-long soft opening period to the tens of thousands of Disney World cast members.

The 10-km-long system, one of the world’s most extensive and longest gondola public transit networks, has three lines, serving the Epcot and Disney’s Hollywood Studios theme parks and four hotel resorts.

There are 300 fully-accessible gondola cabins, each holding up to 10 people seated. Cabins depart the terminals at frequencies of up to every 10 seconds, providing a capacity of 3,000 passengers per hour per direction. 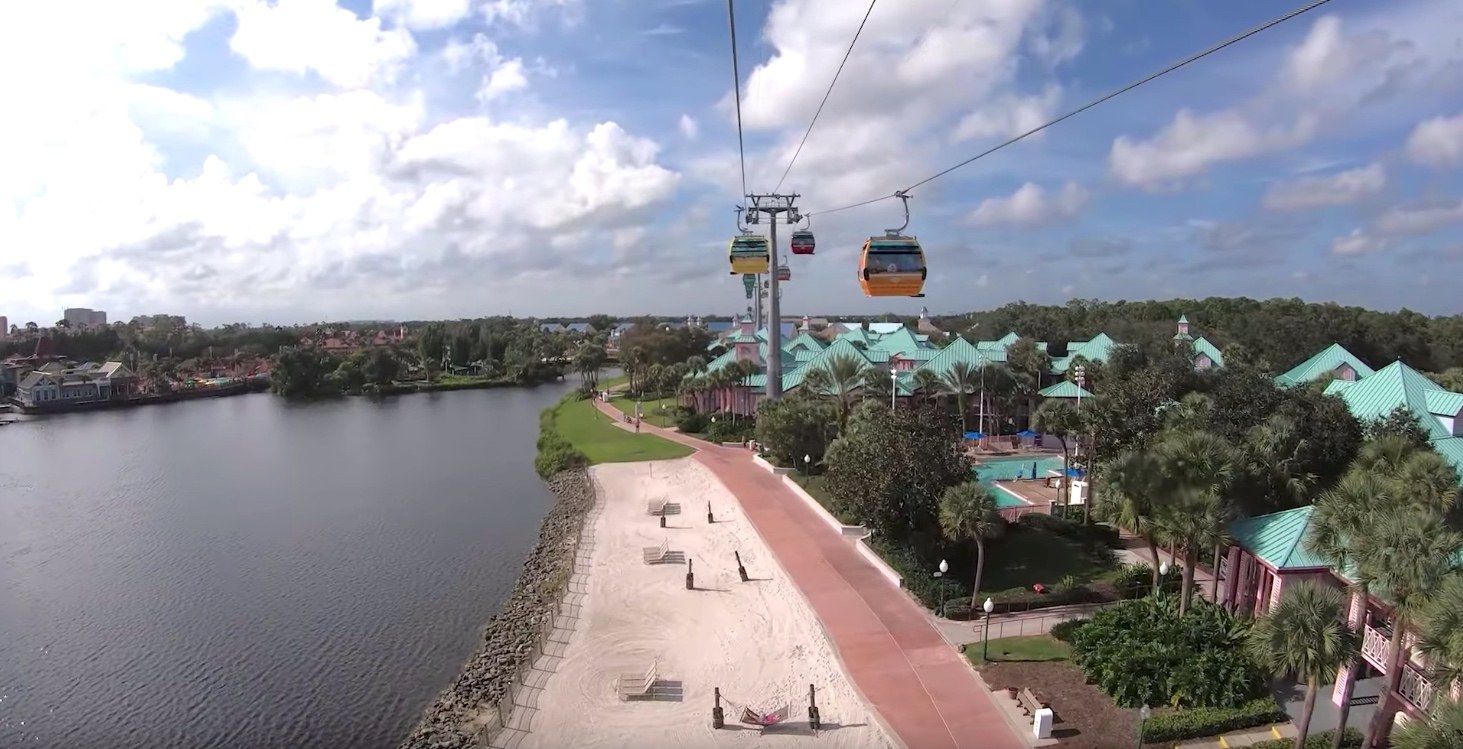 While the cabins do not have air conditioning in Florida’s heat, they have large window vents that allow for a flowing breeze to pass through the interior of the cabin, which travels at speeds of up to 18 km/h and at heights of up to 90 ft.

Each cabin interior is also equipped with two-way communications systems — a speaker voicing automatic announcements throughout the rides and a speakerphone for emergency-use only.

The longest point-to-point journey on the Skyliner is the 15-minute ride between Caribbean Beach Resort and Epcot. Passengers are provided with unique aerial views of Disney World, flying above treetops, landscape, and lakes, with the terminal for Art of Animation and Pop Century resort hotels situated in the middle of a lagoon.

It supplements and replaces some of Disney Transport’s existing bus services connecting resort attractions and destinations. It is designed and built by Doppelmayr, which is one of the world’s largest designers and manufacturers of aerial gondola and tram systems. 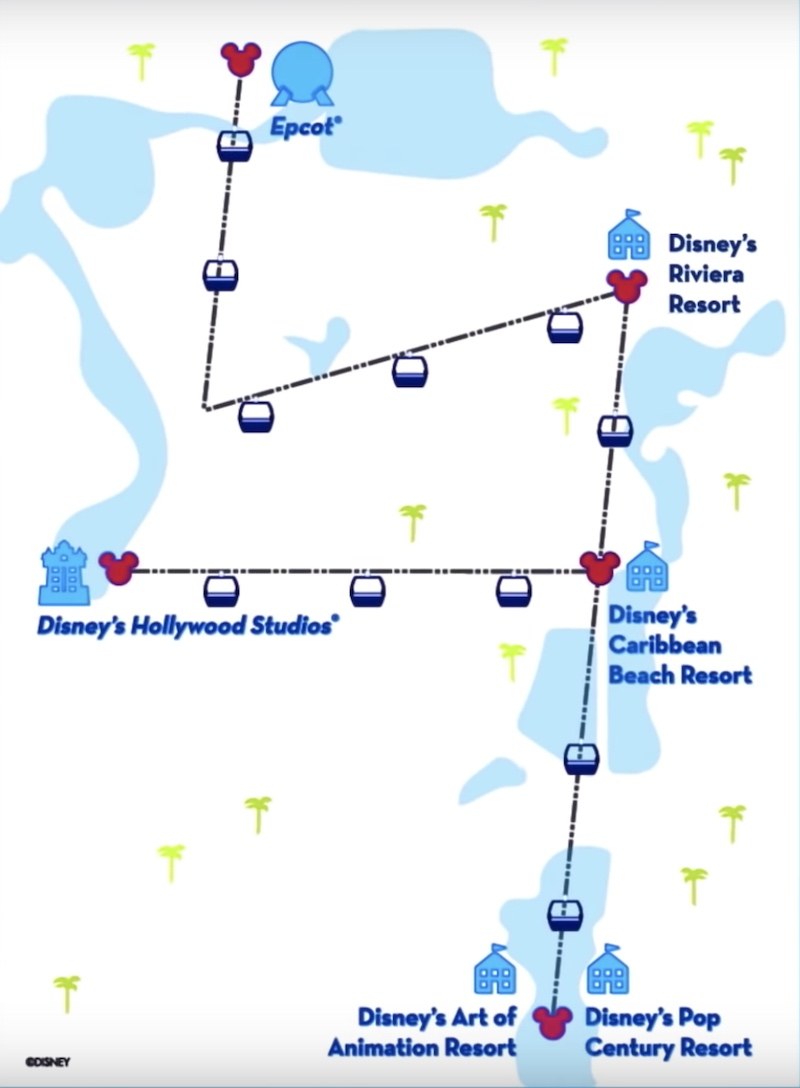