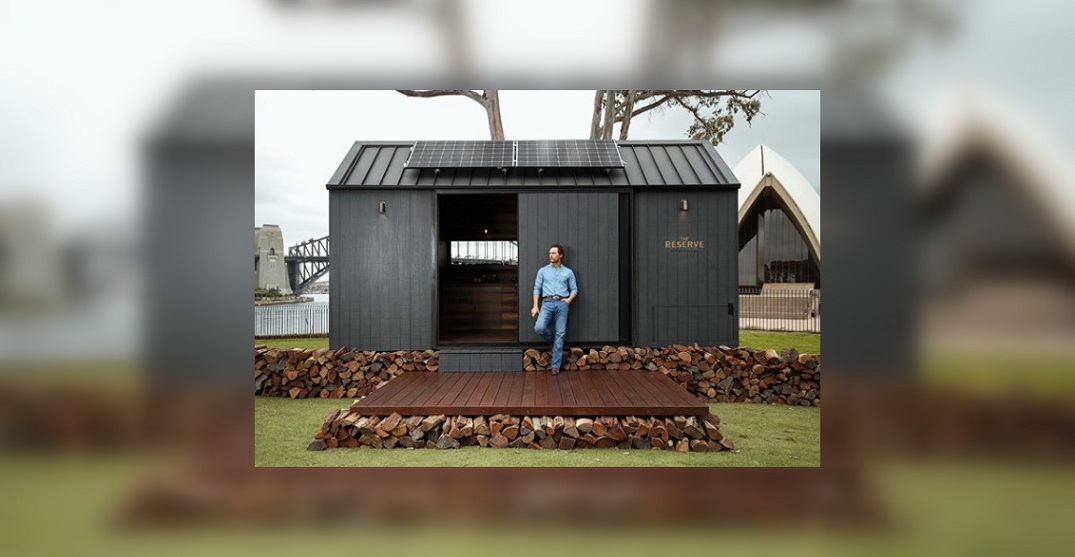 Matthew McConaughey in front of cabin

The Academy Award-winner has designed an eco-friendly cabin, named “The Reserve,” along with twins Chris and Cam Grant, the founders of the tiny home startup Unyoked.

Unyoked prides itself on accommodations that leave a “minimum footprint” but provide  “maximum chill.” Guests are able to select a hideout, pick their dates, and receive the secret location of their trip seven days before the expedition.

Visitors are invited to “get lost in the wilderness. Well…not lost lost, but kinda,” according to the company site.

The cabin is in an off-the-grid location in Sydney, Australia, and will be available for rent starting in December.

It was released as part of liquor brand Wild Turkey’s “With Thanks” campaign, whose goal is to entice more people to “reconnect with the wild” while also promoting conservation and the importance of protecting the environment.

Launched in Sydney on Wednesday, the cabin will be transported to the Central Coast region in Australia, where it will be available for rent.

According to the press release, McConaughey is proud that the cabin was constructed with sustainable materials and runs on solar power:

“I’ve always been in awe of Australia’s natural beauty. My hope now is that The Reserve by
Wild Turkey x Unyoked cabin will inspire Australians to reconnect with nature as an antidote to the frenetic pace of life. I’m also proud that the cabin will form part of the Australian Wild Turkey With Thanks initiative that will support people and organisations who demonstrate unwavering conviction to preserving and protecting Australia’s great wilderness and wildlife.”

The cabin also comes with a wooden plaque inscribed with “Longbranch Loo,” that hangs above the bathroom door, an homage to McConaughey’s line of bourbon.

The one thing that the cabin does not have is WiFi.

This is the latest project for McConaughey who, on top of his ridiculously successful acting career — starring in over 40 films including Dazed and Confused, Dallas Buyers Club, and Interstellar — also serves as creative director at Wild Turkey. If that isn’t impressive enough, he also acts as a film professor at the University of Texas.

McConaughey was the design director on the construction of the cabin to ensure that it aligned with Wild Turkey’s vision for their craft and their history of doing things “the right way” for nearly 100 years.

From conception to the physical construction, McConaughey executed a range of decisions for the design of the cabin, including layout, furnishings, furniture, and perhaps the most revered feature, a hidden bar.

Several other personal touches from McConaughey are featured, including a “curated selection” of vintage books inside the cabin, including The Greatest Salesman in the World by Og Mandino as well as Origins of African Wisdom for Everyday by Ralph Waldo Emerson.

He also made sure that he could share his affection for American country and folk music by selecting a variety of his favourite cassettes to be played on the cabin’s cassette stereo, says the release, including Highway 61 Revisited by Bob Dylan, Talkin Timbuktu by Ali Farka Toure and Ry Cooder, and Metamodern Sounds of Country Music by Sturgill Simpson, an American country music singer-songwriter.

McConaughey met with Chris and Cam Grant after being inspired by their relentless conviction to make the Australian outback accessible via their tiny-house cabins.

A percentage of the proceeds earned by the cabin, as well as $1 from every bottle of McConaughey’s Longbranch brand sold in November and December, will be donated to Unyoked’s charity partner, the Foundation for National Parks & Wildlife, a non-government organization that vies to protect Australia’s wildlife and wilderness.