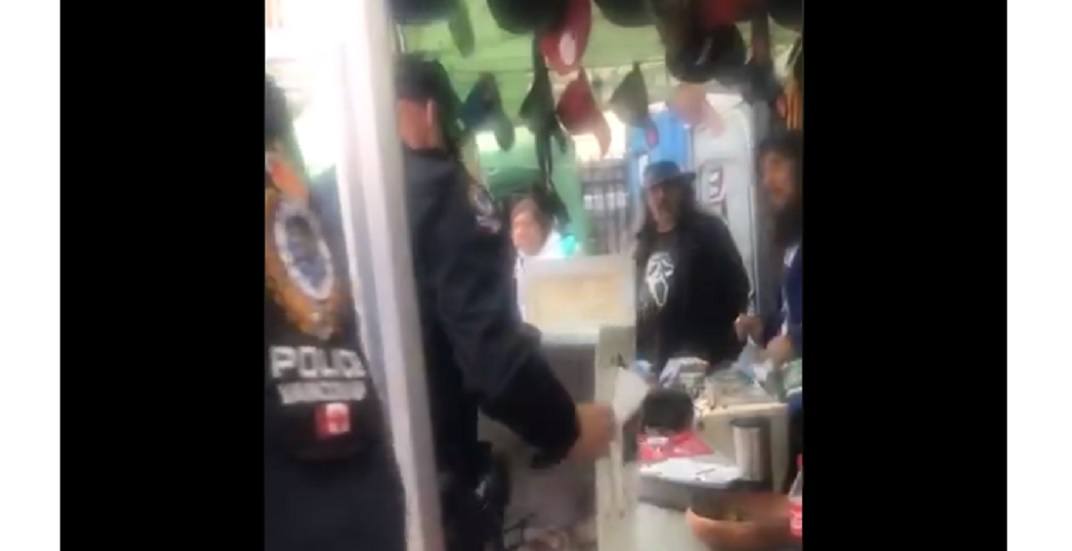 The Vancouver Police are responding to criticism following an incident in the Downtown Eastside late last week.

Blyth can be heard telling the officers, “good for you guys taking opiate replacement from people.”

In a release on Wednesday, police said that the day before the seizure, officers conducting routine patrols in the Downtown Eastside located a display of cannabis products, “in plain view,” at a vendor’s table in the public market at 62 East Hastings Street and clearly marked for sale.

The officers spoke with the executive director of the market and determined the operator of the table was aware that trafficking was prohibited in the market, but they ignored requests to leave.

Officers then met with a man who identified himself as being responsible for the display.

“After listening to his explanation that the products were medicine, it was pointed out they were packaged in a manner consistent with trafficking,” said the VPD. “He was reminded that illegal activity was not welcome in the market.”

The VPD said the officers exercised their discretion, warned the man and allowed him to pack up and leave without any further police action.

Just after 10 am the next day, officers returned to the market and found the same display in plain view, clearly trafficking controlled substances.

A number of prepackaged and loose cannabis products, pill capsules, vaping products, and two bottles of an unknown white powder, and no one would claim responsibility for the products.

“Selling controlled substances in this manner is trafficking, and is in violation of current regulatory and criminal sanctions, and will still be illegal after the legalization of cannabis on October 17,” said a statement from the VPD. “Although the officers were met with a hostile crowd, the products were lawfully seized.

“To be clear, VPD officers spoke with the executive director of the market, who stated they do not want these products being sold in the market.”

“Select recordings of officers’ actions were shared on social media,” said the VPD.  “Unfortunately, videos such as these show only a small portion of what occurred and none of the previous informal attempts to resolve this issue.”

“Our officers took a very fair and balanced approach to the situation by giving a warning the previous day, listening to the wishes of the market executive director, and not allowing the blatant trafficking of illegal substances in public spaces,” said VPD Chief Adam Palmer.

Palmer added that the VPD is “very aware of the terrible consequences of the opioid crisis, and we continue to support evidence-based harm-reduction initiatives. We are a very fair, progressive, and open-minded police agency, and we were the first to call for ‘treatment on demand’ in 2015.”

Palmer said the VPD will “continue to support our partners in the health and addictions community to save lives in our city. We will also enforce the trafficking laws of Canada as necessary when people are blatantly breaking the law.”