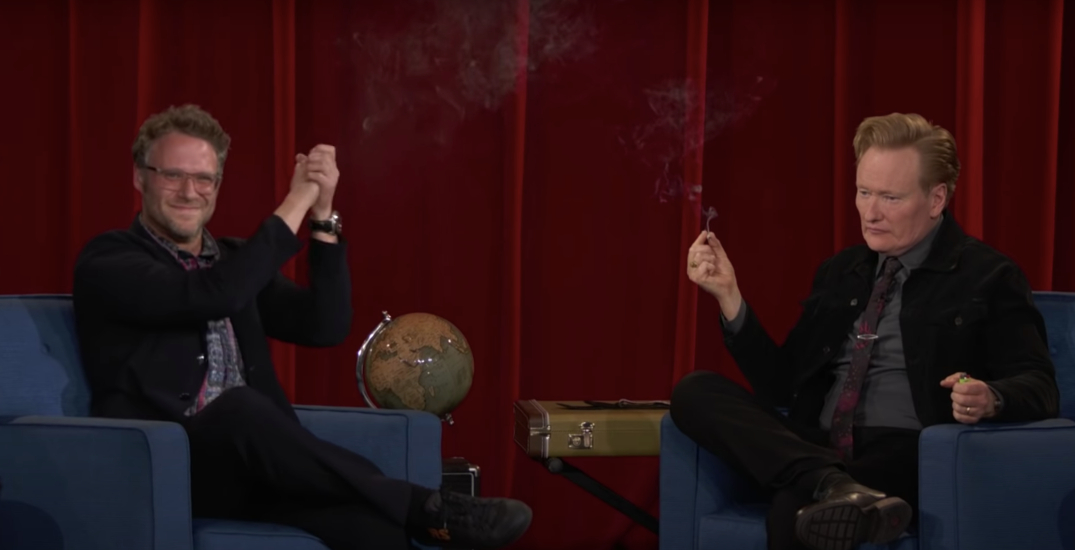 Seth Rogen had a parting gift for Conan O’Brien during his last week of shows with TBS, and it was a gift only Seth Rogen could provide: a joint.

The Vancouverite suggested that O’Brien spend his newfound free time smoking weed because, of course he did.

During Tuesday night’s show, the 58-year-old late-night television host said he’s tried weed before but didn’t feel like he was smoking the “right stuff.” O’Brien said Rogen was a “professor of weed” and asked what might be good to smoke.

Without hesitation, Rogen pulled a joint out of his pocket and handed it to O’Brien. The Conan host took the joint and quipped, “This is what you do when you know it’s over for you.”

(After holding the joint backwards, that is.)

O’Brien, who has a variety series premiering on HBO Max later this year, passed the joint to Rogen, who took a haul before handing it to the show’s sidekick, Andy Richter.

“I’m so happy with what just happened,” said Rogen before delivering his signature laugh. “I wasn’t expecting any of this.”

The trio shared a series of jokes and giggles before O’Brien admitted, “I’m laughing way too long.”

When it comes to celebrities who’d be good to smoke with, it’s tough to top Seth Rogen AND Conan O’Brien at the same time.

I smoked weed with @ConanOBrien his show and was legit terrified that I got him too high haha. (This was a surreal and shocking moment for me and was genuinely unplanned) https://t.co/0twpCHgTUw