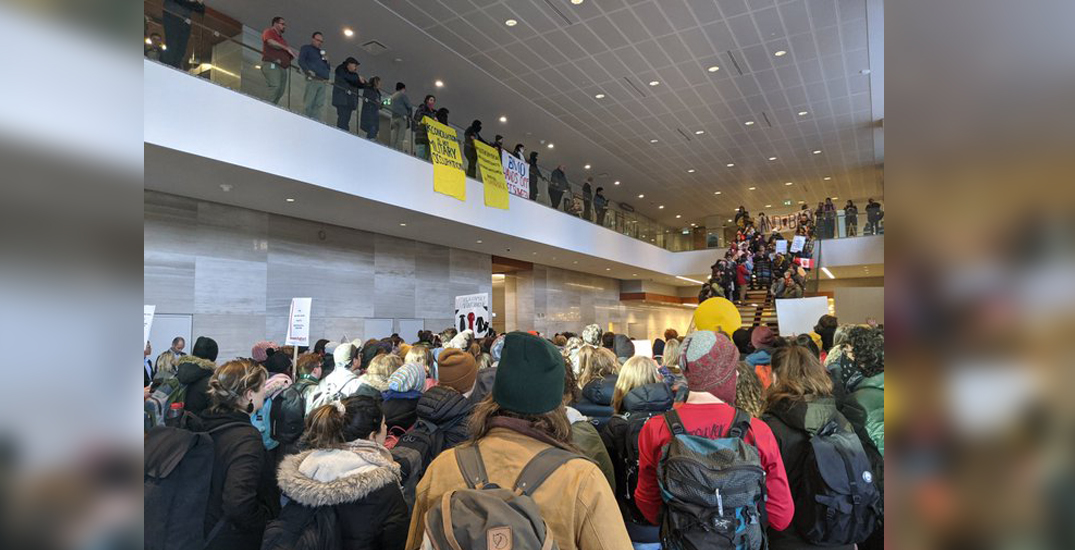 A group of demonstrators filled the lobby of the Enbridge Centre in downtown Edmonton Monday, calling for RCMP to stand down on Wet’suwet’en territory in northern BC.

They sang songs and unfurled a banner with the words “land back” emblazoned on it, the latest in a series of demonstrations in Ontario and BC supporting the Wet’suwet’en hereditary chiefs and their allies who are fighting construction of a Coastal GasLink natural gas pipeline through their territory.

One of the building’s main tenants is BMO, a key funder of the Coastal GasLink pipeline currently being forced through unceded Wet’suwet’en territory by the RCMP#Wetswuetenstrong #ShutDownCanada #ReconciliationIsDead pic.twitter.com/dxP1qkuQ0L

500+ occupying @BMO office in downtown edmonton right now led by #IndigenousYouthForWetsuweten! We won’t stop until @jjhorgan, @JustinTrudeau, @BruceRalston, and all investors stand down and stop their militarized invasion of unceded Wet’suwet’en lands. pic.twitter.com/MgLkGhvMZC

In recent days, Mounties have been arresting and forcibly removing people on Wet’suwet’en territory to enforce a court injunction for the gas company to continue construction.

Many elected chiefs have signed on to the pipeline project. They hold authority through the band council system outlined in the Indian Act.

However, the Wet’suwet’en traditionally followed a hereditary governance system organized through clan groups. That’s why the hereditary chiefs involved in pipeline resistance say they’re the ones who need to give consent for the project to cross Wet’suwet’en territory.